Shares of Bank of America are up after the bank reported third-quarter earnings.

When Bank of America (BAC 1.38%) reported third-quarter earnings on Friday, it was easy to get caught up in a recitation of the typical earnings-related metrics -- things like revenue and earnings per share. But I would argue that neither of these is the most important number to focus on when analyzing the latest quarterly performance of the nation's second-biggest bank by assets.

"Our focus on responsible growth and improving the way we serve customers and clients produced another quarter of strong results," said chairman and CEO Brian Moynihan. "Revenue across our four lines of business grew 4 percent, even with a challenging comparable quarter for trading. We delivered positive operating leverage year over year for the 11th consecutive quarter while continuing to invest in improved capabilities." The more important number, I believe, is Bank of America's return on assets. This is a measure of profitability, derived by dividing a bank's quarterly profit by its total assets.

The threshold to watch in this regard is 1%. A bank that generates a return on assets in excess of 1% is generally considered to be well-managed, while a bank that comes in below that has, to put it in corporate speak, an opportunity to improve.

Another reason to watch the 1% threshold is that Bank of America has set it as one of its principal performance targets, the other two being its return on equity and its efficiency ratio. 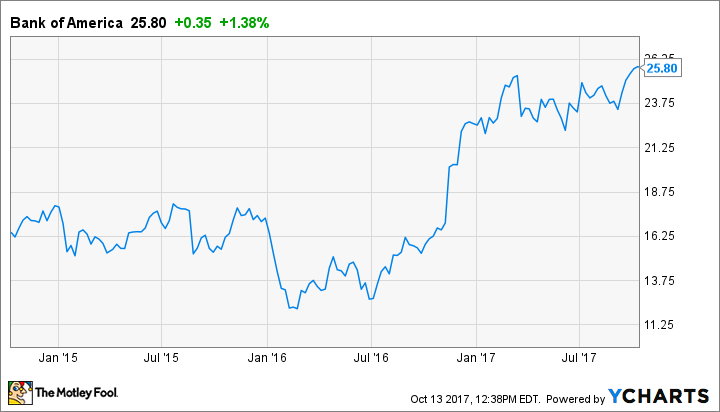 So, how is it doing in this regard?

No, it has yet to hit its target. Its return on assets in the third quarter came in at 0.98%. Close but no cigar. Yet, the Charlotte, North Carolina-based bank didn't come up short because it's necessarily a poorly managed institution, which, as I said, is the presumption in the case of a bank that earns less than 1% on its assets. It's instead because Bank of America is still clawing its way back from missteps that cost it upwards of $200 billion during the financial crisis.

When it comes to return on assets, in turn, the more important thing to watch in Bank of America's case is the trend in the metric over time. And here's where the news looks much better.

The takeaway is that, at this rate, Bank of America appears to be on the verge of hitting its target. With luck, it may even eclipse it this year.