Facebook (META 1.70%) is taking its virtual reality game to the next level, with upgrades to its existing platform and a new wireless VR product coming next year. In a presentation on Wednesday, the company outlined how it plans to get VR into the hands of over 1 billion people around the world.

VR probably isn't accessible to many people yet, but if Facebook succeeds with these product improvements it'll take a step toward the billion person goal. Here are the notable announcements and how they may impact Facebook's VR trajectory. 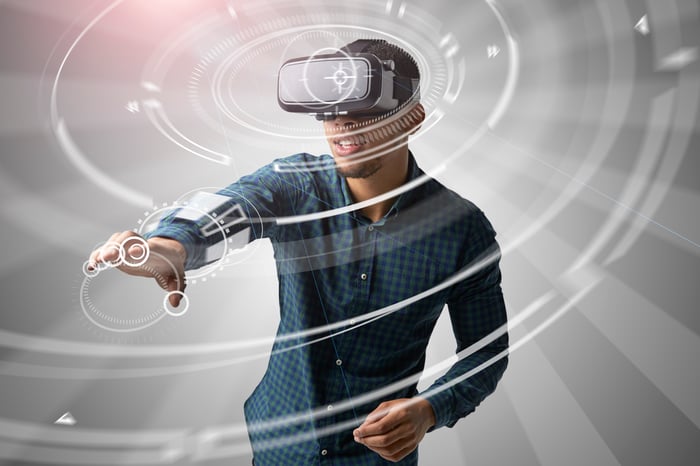 One of the first announcements Facebook made concerned Oculus Go, a stand-alone headset that will cost $199. The headset will be similar to Samsung Gear, but won't require a separate smartphone.

The price point is a great way to get consumers into the Oculus platform. But it's still a low-end VR product, so this will be an entry-level experience for consumers.

Rift is getting a price cut

The Rift headset has been Facebook's premium VR product, but it's been hampered by a high price point ($800) and the need for a high-powered computer. The computer is still necessary, for now, but the Rift is getting a price cut to $399. That'll make it cheaper than HTC's Vive headset, which is the company's strongest competitor right now.

In 2018 the Rift user interface will also be getting an upgrade to make the Oculus Home easier to use; you'll even be able to use your desktop while in VR. Usability of high-end VR has been a challenge since Oculus Rift and Vive were launched, so making it more accessible for consumers is a step in the right direction.

The next generation of Oculus

The Oculus Santa Cruz, with inside-out tracking that untethers the VR headset, was also announced. It will be the next generation high end VR headset -- think of it as Rift, but without the computer. Facebook didn't give a lot of details on price or launch date, but did say the product would be available in 2018.

Creating a tether-less VR experience is key for the technology long-term, although it'll likely take a few years to make the ecosystem and content big enough to make amazing games and experiences.

One area where Oculus needs to be a big player is in business. Companies are finding valuable applications for VR, like auto showrooms, educational tools for medical students, and training for large equipment operators. These users have found a business case for VR and will drive adoption to a higher level.

Finding applications for VR beyond games will be key for Oculus entering the mainstream, and the new business platform is a step in that direction. Time will tell how developers and businesses use the product, but at least Facebook knows this is a key market.

What's most notable about Facebook's VR announcements is that the company is taking VR very seriously. Bringing down the price of entry-level products and making them usable out of the box is a great step forward. Improving the Rift interface will also make it more accessible for users. And, most importantly, un-tethering the VR headset will be an important advancement that will make VR easier for the average person to use.

If Facebook can become the dominant VR platform the technology could be a meaningful revenue generator for the company and value creator for Facebook users. It looks like the company is taking the right steps in that direction.