You can be sure that the economic tides have truly shifted within an industry when customers begin to demand of commodity products the qualities they once sought out only in high-end goods.

Last week, in a bid to appeal to consumers' demands for "clean label" foods, Nissin Foods USA announced that it's updating the recipe of its iconic Top Ramen line of instant noodles to reflect the three changes most requested by customers. The company told Food Navigator-USA that it's reducing sodium across its packaged noodles by 15%, eliminating added MSG (beyond the naturally occurring glutamate found in its other ingredients), and dispensing with artificial flavors.

As a lifelong fan of instant ramen noodles, I for one will be curious to see how Nissin maintains the umami quotient in its flavor packets without the aid of monosodium glutamate, an ingredient which, though never proven to have harmful effects, nonetheless has faced much more skepticism in the West than in Asia, where it was invented in the early 20th century. 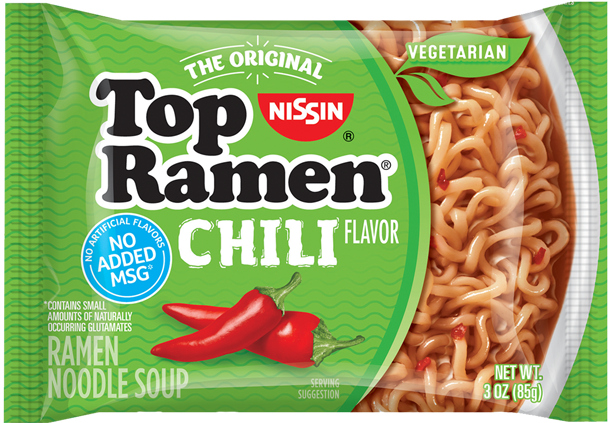 But of all foods to cross over to the healthy side, instant ramen? Believe it. We're moving beyond the mainstreaming of natural and organic nutrition to the shaming of industrialized, chemically formulated packaged food in a hurry, and in all seriousness, it's high time.

The current year has been notable for the number of visible signs of this sea change: Amazon.com (NASDAQ:AMZN) acquired a vested interest in pushing healthy food to the masses when it purchased natural grocer Whole Foods Market this summer. And PepsiCo (NASDAQ:PEP) surprised many observers recently by totally revamping some of its most sinful snack foods to win shelf space at Whole Foods, even offering an organic version of Doritos.

Perhaps Nissin felt the pressure of being behind the curve. Spice and condiment giant McCormick & Co. (NYSE:MKC) sells non-GMO certified, no MSG-added ramen noodles through its Simply Asia line, which, while not quite instant, can be prepared in five minutes flat. Instant soups by privately held Annie Chun's, which also boast non-GMO, non-MSG, and low-sodium labeling, with organic and vegan options to boot, are featured at Whole Foods, and have chipped away at Nissin's real estate in conventional grocery chains as well.

Nissin's action is fascinating in that despite industry evolution, customers provided the sharpest impetus for the ingredient reformulation. Since the early 1970s, when legendary noodle inventor Momofuku Ando opened Nissin Food's U.S. subsidiary, the primary attributes of ramen instant noodles have been ease of preparation and low prices. Even today, a single serving of "Top Ramen" runs about 20 cents at my local grocery store.

This rock-bottom prices for which Nissin's dried noodles are famous should influence consumers to be somewhat indifferent to their ingredients. And the product's reputation as a staple food of cash-strapped college students provides support to this line of classical microeconomics textbook thinking.

But customer clamor sides with fresh industry data. A recent survey of 1,300 consumers across Europe, North America, and the Asia-Pacific region, by London-based food industry PR firm Ingredient Communications, found that 73% of customers are willing to pay more for food and beverage products manufactured with ingredients they both recognize and trust.

Forward-looking management teams anticipated this day years ago. PepsiCo now derives nearly half its net revenue from what it terms "Guilt-Free" snacks and beverages. Conversely, Campbell Soup Co. (NYSE:CPB) has been stuck in a sort of reactionary mode, slowly reworking its recipes in a perennially lagging effort to stay relevant, although perhaps recent acquisitions and strategy tweaks point to more meaningful change ahead.

How does this overarching trend affect investment choices between packaged food companies? Simply, clean-label formulation should move up on your list of investment criteria in the CPG sector. Companies like PepsiCo and McCormick which embrace consumers' hoisted bar for acceptable ingredients are seeing real-time market share gains -- and stock price appreciation -- while competitors like Campbell Soup are finding the terrain much rougher.

In other words, if the manufacturer of the humble, featherweight packet of flash-dried noodles flavored with an engineered powder soup base can go clean, we've reached critical mass. Multinationals that ignore consumers' ingredient demands from here will do so at the peril of their brands' longevity.