Please ensure Javascript is enabled for purposes of website accessibility
Log In Help Join The Motley Fool
Free Article Join Over 1 Million Premium Members And Get More In-Depth Stock Guidance and Research
By Lou Whiteman - Oct 17, 2017 at 8:17AM

Raytheon is soaring right now. Here are three things that could bring it back down to earth.

Raytheon (RTN) manufactures complex weapons for a dangerous world, helping its stock to easily outpace the S&P 500, as well as its defense rivals, year to date, as investors bet on continued demand for its missile systems and other armaments. Reading through the daily headlines, there's reason to be bullish on continued demand for Raytheon products. Still, there are dangers lurking that could cause turbulence as the company tries to power ahead.

1. Competition is heating up

Raytheon has garnered favorable investor sentiment for having a presence in areas that are considered Pentagon priorities, but rivals are nipping at its heels. Northrop Grumman's $7.8 billion purchase of Orbital ATK would not only rocket Northrop past Raytheon to become the fourth-largest U.S. defense supplier, it would also strengthen the company in areas like ground-based missile defense, where Raytheon is strong. 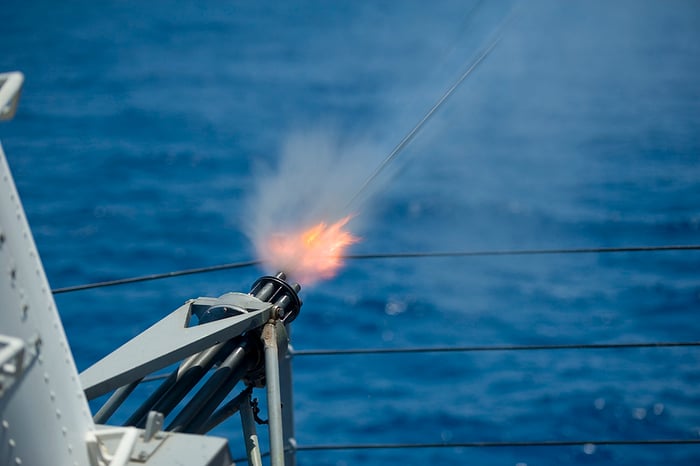 Orbital, in the past, has been a partner to Raytheon, for example, providing the booster rocket for Raytheon's ground-based missile-defense warheads. Combining Orbital's propulsion strengths with Northrop's expertise in sensors would create a formidable potential competitor in future product competitions.

It's already a crowded marketplace. While Raytheon scored wins in the 2018 budget with increased requests for its Tomahawk cruise missile and small-diameter bombs, the Pentagon is also investing heavily in Lockheed Martin-built guided multiple rocket systems and Hellfire missiles, as well as Boeing bombs. Overall, Boeing and Lockheed products combined account for more than 70% of the $3.5 billion requested for "preferred munitions" in the 2018 Pentagon budget submission, according to a Defense News report. The Pentagon, for obvious reasons, prefers to have as many options as possible when buying weapons, and doesn't want any one company cornering the market.

Operating margins in Raytheon's missile-systems business dropped 130 basis points in the second quarter compared to a year prior, but the company attributed that decline to a change in product mix and said it expects to see a rebound in the second half. Assuming that's the case, Raytheon hasn't felt the impact of increased competition so far. Investors need to watch carefully for indications that the company is finding growth harder to come by in 2018.

But as the ongoing Obamacare repeal saga has highlighted, nothing comes easy in Washington. The defense budget faces criticism both from fiscal conservatives, who want to see across-the-board spending cuts, and from Democrats, who would like to see some of that money spent elsewhere. Both sides have discussed repealing the Budget Control Act of 2011, which led to sequestration and a reduction in defense spending beginning in 2013, but there's little consensus on how to make that repeal happen.

Further reductions seem unlikely, but delays, or caps, on increases that could cut into contractor growth rates could be inevitable.

Geopolitical concerns could also derail growth. Raytheon wins high marks from investors for being the U.S. contractor that generates the largest percentage of its revenue from overseas, which is seen as a hedge against Washington dysfunction. But there's a downside to too much exposure to regions such as the Middle East.

There's a risk that Saudi Arabia and other oil titans of the region could be forced to dramatically shrink defense budgets in years to come if current low oil prices do not recover. Even if the Saudis do have the money to fund arms deals, the U.S.' relationship there and throughout the region is evolving. In 2016, the Pentagon suspended some arms sales to Saudi Arabia due to the ongoing war in Yemen, and tensions between the two powers have increased as the Saudis have squeezed fellow U.S. ally Qatar.

NATO member Turkey is another Raytheon customer with increasingly tense relations with the United States. Raytheon bulls can argue, correctly, that recent theatrics by North Korea and growing tensions between Russia and its Eastern European neighbors show that the market for Patriot missile defense and other systems is global. But changing relationships in the Middle East could at least delay, if not outright quash, optimistic projections for continued international growth.

Raytheon's $1.57 billion deal for cybersecurity expert Websense raised a lot of eyebrows when it was announced in 2015. Dealing with the government is a very different prospect than dealing with corporate customers, and defense companies, by in large, have fared poorly in previous attempts to branch out into commercial businesses.

Two years later, doubt still lingers. Forcepoint, in the first six months of this year, has generated an operating margin of just 6.4% on net sales of $282 million compared to a 10.1% margin on sales of $276 million in the same period a year prior. The decrease was attributed to "planned investments in sales and marketing," but there's little to show for that increased marketing, so far. Forcepoint's backlog stood at $425 million at the end of the second quarter, down slightly from $426 million as of June 2015.

Forcepoint isn't big enough to sink Raytheon, but it could prove an unwanted distraction should it flounder, and any additional expansion by the unit could require additional capital. The company remains optimistic that what CEO Thomas Kennedy told analysts in July is a "longer-term play" will eventually pay off. Perhaps it will, but results so far indicate that day is still a long way off.

Raytheon is a well-run company with an impressive portfolio of products. But it's also expensive. The company from the late 1990s until 2015 never traded at above 1.5 times sales, but today it trades at more than 2.2 times trailing-12-month totals.

Given the current market excitement surrounding defense stocks, it would be unwise to call a top. There's also a chance that management will be able to navigate all of the concerns listed above. Raytheon is well managed and none of these concerns are reasons to hit the exit. But between the sky-high valuation and the potential speed bumps on the road ahead, there isn't a compelling reason to jump in and buy at these levels.