Ford Motor Company (NYSE:F) said its sales in China were roughly flat in September from a year ago, as good results for some of its larger and more expensive products helped to offset ongoing declines in sales of its lower-priced vehicles.

But again, Ford's result lagged that of its larger rivals, Volkswagen (OTC:VWAGY) and General Motors (NYSE:GM). The mass-market VW brand posted a 7.5% sales gain in China in September, while GM's China sales rose 6.6%, as both made hay with what has traditionally been a Ford mainstay: crossover SUVs. The market for premium crossover SUVs has been white-hot in China, but Ford's well-regarded Edge hasn't been able to capture much of it. Edge sales were down 20% to 8,506 in September. Image source: Ford Motor Company.

The background: Competition has been rising in affordable market segments

Ford has had a rough ride in China over the past couple of years. Increased competition has been a factor: The domestic Chinese automakers have improved their quality enough to compete directly with the global giants in the more affordable market segments -- particularly with small SUVs, a market segment that has absolutely boomed in China recently.

There's still plenty of opportunity for the big names, though. Simply put, the domestic Chinese automakers have work to do to be competitive with larger vehicles and luxury products from the global brands. GM, VW, and some other rivals have taken advantage with new premium products that have captured significant market share and helped to boost profit margins. Both have posted strong sales gains recently that were driven in large part by new upscale crossover SUVs.

Ford, however, has been a little slower to respond. Here's where things stand for the Blue Oval in China.

Like many of its global rivals, Ford's small-vehicle sales in China have been hurt over the past couple of years by those domestic Chinese upstarts. That trend continued to play out in September.

Ford sells two compact sedans in China: the familiar Focus, and a simpler, more affordable model called the Escort. The Escort has done fairly well competing with the Chinese domestic brands: Escort sales were up 5% last month, to 31,112 sold. But Focus sales fell 29% to 15,266, and sales of the two together were down 9.4% from their combined total in September of last year.

Ford's small SUV, the EcoSport, is also struggling in China. Sales were down 47% last month to a paltry 1,836, a tough-to-swallow result for an automaker that has traditionally had very strong SUV models. A revamped EcoSport is set to debut in China shortly; that may help. 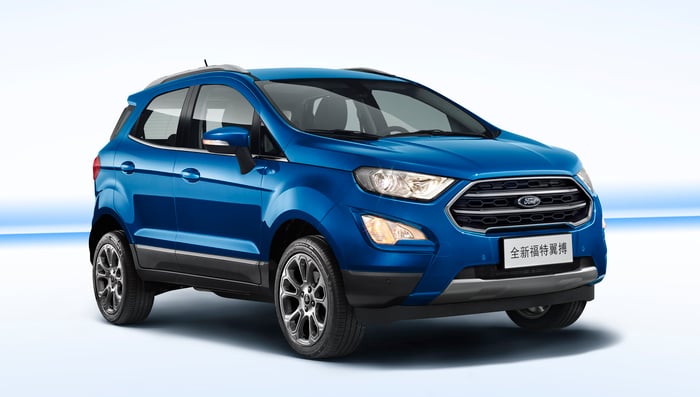 Ford is hoping that its revamped EcoSport, due in China by the end of the year, will give it a sales boost. Image source: Ford Motor Company.

But Ford's larger and luxury models are gaining some ground

Ford did better in September with its one-size-up offerings. Sales of Ford's midsize Mondeo sedan (a twin to the U.S.-market Fusion) were slow early in 2017, but they've gained recently. Mondeo sales rose 19% to 11,594 last month, capping a third quarter in which the sedan's sales in China rose 17%.

Likewise, its Kuga and Everest SUVs both did well in September, although the total sales numbers were fairly small. Sales of the Kuga, a near-twin of the U.S.-market Escape, jumped 42% to 9,347 last month. Sales of the Everest, a traditional body-on-frame 4x4 SUV based on Ford's midsize Ranger pickup, rose 16% to almost 1,100 sold.

Those are both good sales gains, though Ford doesn't have anything in its China SUV lineup that sells like GM's upscale Buick Envision: GM sold almost 20,000 Envisions in China in September.

But just as GM's Cadillac brand has been generating good growth in China, Ford is making some hay with Lincoln, its own old luxury brand. Lincoln has been a good story for Ford in China, where its familiar models are sold via plush dealerships that put great emphasis on personal service. Lincoln sales were up 79% to 5,721 in September, and are up 92% year to date.

The upshot: Ford still has some work to do in China

It appears that after Ford's equity income from its two Chinese joint ventures fell 34% last quarter, it became clear to Ford's leadership team that changes needed to be made. One big change has already happened: Ford's China team got a new leader in August.

Jason Luo, who came to Ford from auto supplier Key Safety Systems, is an American born in China who brings significant local knowledge to his new role. That's something that Ford's China operation may have been lacking at the highest levels, and that may have contributed to its product missteps over the past couple of years.

According to reports, Luo is laying the groundwork for a shift in strategy, speeding decision-making and beginning development of some unique-to-China products that could include a new line of electric vehicles for the commercial-fleet market.

More broadly, fresh products are what Ford needs most to get back on a growth path in China. Those will come, but investors may need to be patient for a few more quarters while Hackett and Luo work to get Ford's China operation back on course.