After bobbing up and down all last week, shares of online retailer Overstock.com (NASDAQ:OSTK) are finally breaking out this week. Shares surged 4% over the weekend to close at $30.30 yesterday, and they jumped as much as 10.5% more in early Tuesday trading (and are still up 8.2% as of 11:55 a.m. EDT).

For this, you can thank a strangely positive report out of noted Overstock "bear" Marc Cohodes, who on Friday changed his stripes and confirmed that he has been loading up on Overstock, calling the shares "ridiculously cheap." 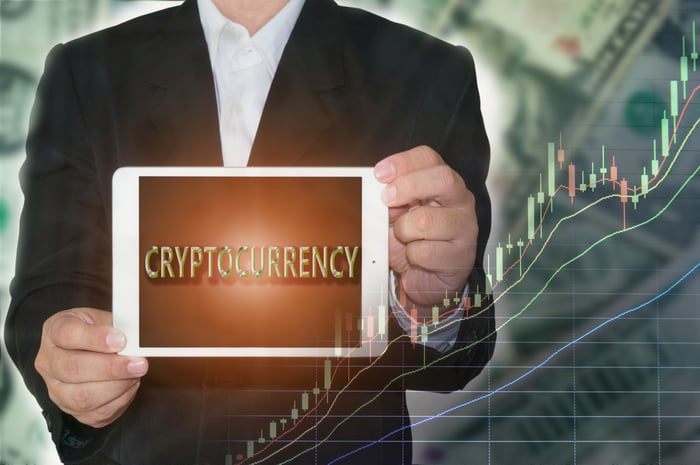 Isn't there something suspicious about this cryptocurrency stock surge? Image source: Getty Images.

Why do one short-seller's words carry so much weight with investors? Partly, one imagines, from the psychological effect of seeing someone who was once negative on the stock swinging 180 degrees to become an Overstock convert. Partly also, though, because of why Cohodes says he now likes Overstock stock.

According to Cohodes, other investors are valuing Overstock.com's retail business at essentially zero, and undervaluing the company's upcoming "tZERO" alternative trading system for the exchange of electronic money raised during Internet Coin Offerings. If and when that new business becomes a success, says Cohodes, "the stock will go apoplectic."

But that's just the thing: We're talking about a big "if," here, because right now, there isn't any business at tZERO to speak of. And as for investors valuing Overstock's core e-tailing business at zero -- well, maybe that's the right valuation for it.

It's been more than two years since Overstock generated any free cash flow from its core business, after all, and GAAP financials show Overstock losing money on the business in four out of the last five quarters. With Overstock stock now both firmly FCF-negative and losing money to boot, Overstock's valuation in excess of $750 million looks...excessive.