On another record-setting day for the market, these stocks stood out. Find out why.

The stock market continued advancing on Wednesday, although for those who focus on the Dow Jones Industrials, the size of the day's move higher was misleading. The Dow pushed decisively through the 23,000 mark by posting triple-digit gains, but nearly all of the index's gains came from a single stock, IBM. Broader benchmarks showed much more modest moves, but even that reflected the generally positive sentiment that investors have right now. Good news from many individual companies also helped send the market higher, and Canadian Pacific Railway (CP -0.19%), Cree (WOLF -2.17%), and Interactive Brokers Group (IBKR 0.08%) were among the best performers on the day. Below, we'll look more closely at these stocks to tell you why they did so well.

Shares of Canadian Pacific gained 6% after the railroad reported its third-quarter financial results. Earnings jumped by nearly half from the year-ago period as Canadian Pacific made the most of favorable currency moves, efficiency gains, and improvements in various operating metrics to overcome sluggish revenue growth trends. CEO Kevin Creel pointed to favorable trends in coal, which has bounced back substantially after several years of weakness during the downturn in the energy sector. Canadian Pacific hopes to keep offering service advantages over its competitors, and its strategic position in North America gives it a great opportunity to participate in economic growth across the continent. 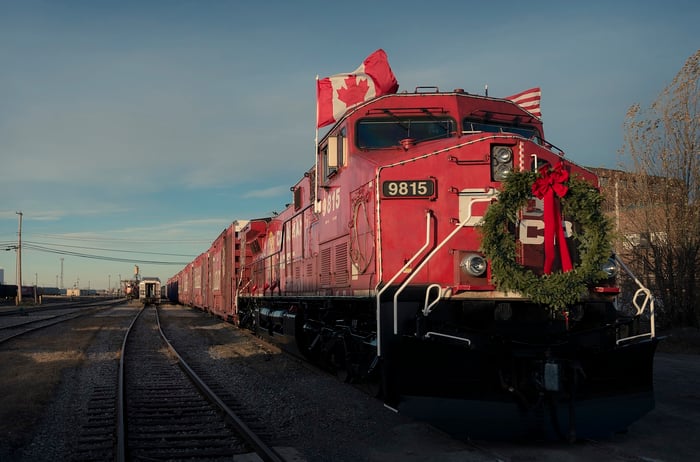 Cree stock jumped more than 16% after the company reported its fiscal first-quarter results and announced its vision for the future. The LED lighting maker initially disappointed some investors with its performance, which included a net loss on the quarter. Yet new CEO Gregg Lowe pointed to his likely timeline in working through strategy, execution, and employee engagement in order to come up with a definitive direction for the company's future. Investors hope that Lowe and his team will be able to reverse Cree's string of losses, and they're optimistic enough to send the stock to levels it hasn't seen since early 2015.

Finally, shares of Interactive Brokers Group picked up 5%. The discount brokerage company experienced extremely strong growth in its third-quarter results, including sales gains of a third and a rise in net income of over half from year-ago levels. Substantial rises in customer accounts, daily active trades, and market-making revenue and profits helped lift Interactive Brokers' results, and many shareholders were particularly surprised by the uptick in trading activity. Interactive Brokers has thrived from appealing to value-conscious and active traders alike, and its results show that the broker is capturing a loyal customer base.