The bank laid out four metrics that, with one exception, are heading in the right direction.

When JPMorgan Chase (JPM 1.19%) reported third-quarter earnings, the news looked good. The bank earned $6.7 billion, reported an especially impressive efficiency ratio of 55% for a bank its size, and saw its profitability remain at the top of its peer group.

Yet, JPMorgan Chase did more than just update investors on its past performance when it announced its results for the three months ended Sept. 30; it also provided investors with an outlook for full-year 2017, offering guidance on four metrics. The first metric that JPMorgan Chase covered in its outlook concerned net interest income. This is what a bank earns from taking deposits and making loans, with the profit coming from the difference between the cost of deposits to the bank and how much it earns in interest payments on loans and fixed-income securities.

JPMorgan Chase expects its net interest income to increase in 2017 by approximately $4 billion. A portion of this comes from an increase in the bank's earning assets, which grew from an average of $2.4 trillion in the first nine months of last year to an average of $2.6 trillion thus far this year.

The other portion comes from the upward trend in interest rates. This is particularly true on the short end of the yield curve, which has benefited from the Federal Reserve's decision to raise the fed funds rate, the principal short-term interest rate benchmark in the United States, three times over the past 12 months. 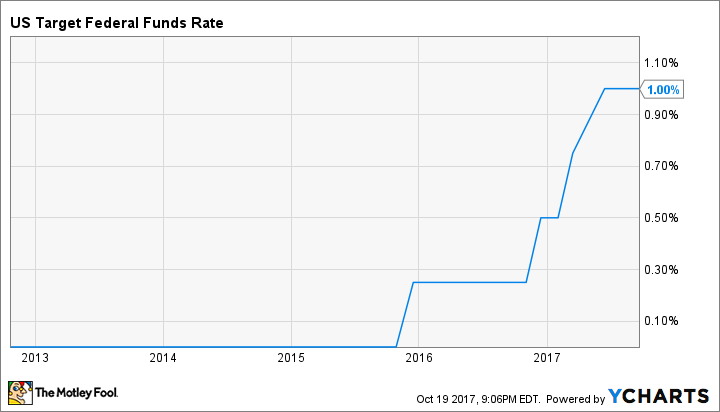 Expenses will be $2 billion higher

The second metric concerns JPMorgan Chase's expenses. The bank expects full-year operating costs this year to come in at approximately $58 billion. That's about $2 billion more than last year. But keep in mind that JPMorgan Chase's revenue is growing faster than its expenses, which means that it is generating positive operating leverage, the ultimate objective of most banks on a quarter-to-quarter basis.

It's also worth pointing out that JPMorgan Chase's expenses used to be much higher. In 2015, for instance, it spent $59 billion on expenses. The year before that, it spent $61 billion. Consequently, while the year-over-year comparison might not seem auspicious, expenses are trending more generally in the right direction at the $2.6 trillion bank.

Net charge-offs to be lower

The third metric that JPMorgan Chase offered investors an update on was its anticipated full-year net charge-offs. Even the most prudent banks will once in a while make a loan that isn't paid back. When that happens, they have to charge the loan off as a loss.

JPMorgan Chase sees charge-offs finishing the year around $5 billion. That's a lot of money, but given the size of the bank, it nevertheless accounts for a small portion of its $914 billion in total loans.

In terms of the trend line, moreover, while $5 billion in net charge-offs would represent an increase over 2016, when JPMorgan Chase charged off $4.7 billion worth of loans, or 0.54% of its loan portfolio, the expected growth this year is negligible and consistent with what one would expect from a bank that has added $19 billion worth of loans since the end of last year.

Core loans to grow by 8%

The final metric that JPMorgan Chase offered full-year guidance on when it reported third-quarter earnings was its loan growth. The bank expects core loans to increase by about 8% this year compared to 2016, a healthy pace when you consider that loan growth has shown signs of slowing across the industry.

It's important to keep in mind that JPMorgan Chase isn't referring to total loan growth, but rather core loan growth. This nuance has a material impact. In the third quarter, JPMorgan Chase reported a 7% increase in its average core loans. But if you include all of its loans, not just its core loans, the rate dropped more than half, to less than 3%.

Either way, given where the bank industry is at in the credit cycle right now, with many analysts and investors under the impression that the supply of credit is nearing a peak after almost a decade of growth following the financial crisis, any increase in loans should be considered a positive sign.

In sum, with both its performance in the third quarter as well as its outlook for full-year 2017, JPMorgan Chase has reaffirmed that it's one of the most stable stocks in its industry.