It's been a good year for bank stocks, and Bank of America (NYSE:BAC) is no exception.

Since this time last year, shares of the Charlotte, N.C.-based bank have risen 61%. That's more than triple the S&P 500 and well over other banks, with the KBW Bank Index returning 38% over the same stretch.

Given this performance, it's reasonable for investors to ask: Is Bank of America's stock still a bargain? A common way to gauge a bank stock's valuation is to use the price-to-book value ratio, which is calculated by dividing a bank's share price by its book value per share. It tells you how much investors think a bank is worth relative to how much the bank purports on its balance sheet to be worth.

A bank with a price-to-book value ratio above 1.0 trades for a premium to book value. That means investors believe the bank's business model will create value beyond its current net worth, and that they're willing to pay for that value creation.

Alternatively, a bank that is priced at less than its book value per share is said to trade at a discount to book value, which implies that investors expect the bank's value to erode -- as a result of loan losses, for instance. 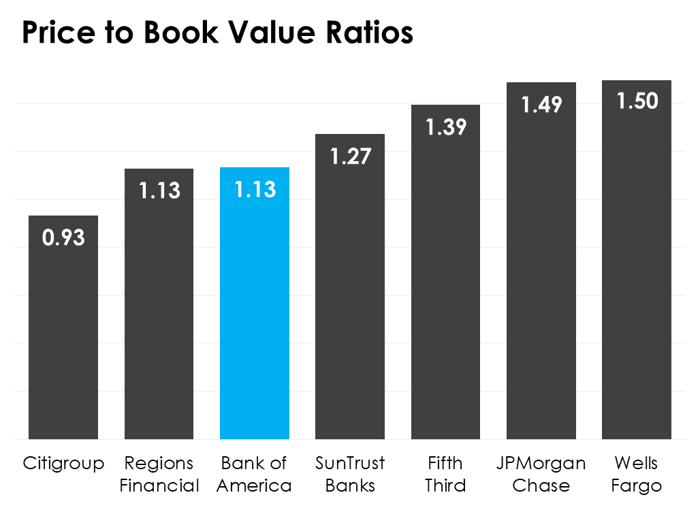 In Bank of America's case, its stock trades for 1.13 times its book value per share. That equates to a 13% premium to book value, implying that investors expect Bank of America to create value for shareholders.

Nevertheless, Bank of America comes across as very reasonably priced relative to other bank stocks. The average bank stock on the KBW Bank Index is valued at 1.41 times its book value, or 28 basis points higher than Bank of America.

Given that, one would be excused for concluding that Bank of America's stock is still a bargain, even though it has climbed 61% over the past 12 months.

A second way to gauge a bank stock's valuation is to use the price-to-earnings ratio, which is calculated by dividing a bank's share price by its earnings per share.

There is no general industry benchmark in terms of what constitutes a high or low P/E ratio for a bank stock. That said, one can compare a bank stock's P/E ratio to stocks that are both within the bank industry and outside of it -- this is a key benefit of the P/E ratio over the price-to-book value ratio. 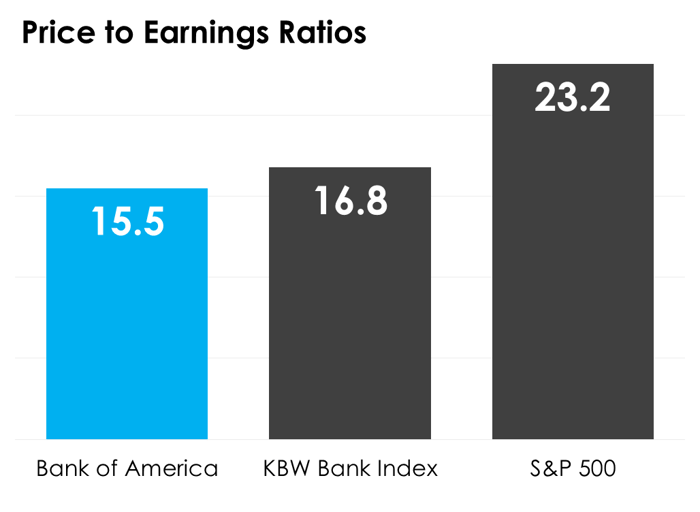 By both measures, then, Bank of America's stock seems cheap, at least on a relative basis.

Just because Bank of America's stock trades at a lower valuation than the typical bank stock in terms of the price-to-book value ratio as well as the price-to-earnings ratio doesn't mean that its stock can't drop by a large margin, because it can.

One could make the argument, in fact, that all stocks are in jeopardy of that right now, given the multiyear bull market in equities since the financial crisis. But holding all else equal, if you're going to buy a bank stock in this environment, it wouldn't hurt to buy one that's selling at a discount to others, as Bank of America's is.