Ford Motor Company (NYSE:F) announced an overhaul of its top executive ranks on Tuesday. In the latest in a series of moves that began with Jim Hackett's appointment as CEO in May, a rising star will take over Ford's global marketing -- and four of Ford's senior leaders will depart.

More shuffling in a year of changes for Ford

Probably the most significant of today's moves is the news that Kumar Galhotra will become Ford's new chief marketing Officer. Galhotra is a well-regarded executive who has earned praise for leading the revival of Ford's Lincoln luxury brand. Galhotra will continue to lead Lincoln as he takes on a significant new set of responsibilities. 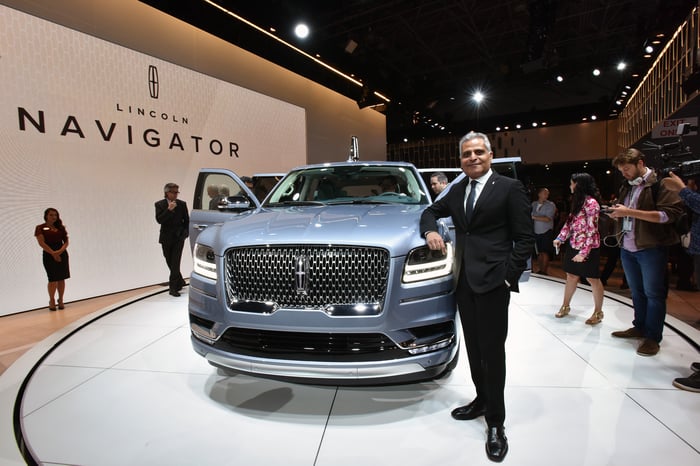 Galhotra will effectively succeed Stephen Odell, Ford's global marketing and sales chief and an executive who played a key role in the company's European turnaround. Ford said that Odell will retire after 37 years at the company. He's one of four senior executives set to leave Ford: CEO Jim Hackett has made major changes to Ford's senior-leadership ranks since taking the top job in May. Image source: Ford Motor Company.

What it means: Hackett is looking to improve Ford's "fitness"

Since taking the top job in May, Hackett has talked about improving Ford's corporate "fitness" and accelerating its ability to make decisions. He started almost immediately by doing away with the senior management structure put in place by his predecessor, Alan Mulally.

Mulally had senior leaders from across Ford reporting to him directly, roughly 20 people in total. Hackett cut that immediately, putting veterans Joe Hinrichs, Jim Farley, and Marcy Klevorn in charge of global operations, global markets, and future mobility, respectively, retaining Shanks as CFO -- and having just about everyone else report to them instead.

Today's moves shook up the ranks further. Probably the most significant of these announcements is the promotion of Galhotra, who has done impressive work revitalizing and recasting the dusty old Lincoln brand, particularly in China. He'll now be asked to bring that magic to the mainstream Ford brand at a moment when it's gearing up to make transformative changes in the way it does business.

What's next for Ford: Earnings -- and more from Hackett?

Ford investors are still hoping to hear more concrete plans from Hackett, whose "strategy update" earlier this month was short on specifics. Their patience may be rewarded later this week: Ford reports its third-quarter earnings results on Thursday, Oct. 26.