All three of these oil industry heavyweights report earnings on Oct. 27. Here's what investors should look for.

It's going to be a busy day for the oil and gas industry as three of the sector's biggest companies -- ExxonMobil (XOM 2.23%), Chevron (CVX 1.20%), and France's Total SA (TTE 0.36%) -- all report third-quarter 2017 earnings on Friday, Oct. 27. With Halloween just around the corner, investors are hoping for treats and not tricks from these oil majors.

But it can be tricky to keep track of all these giant corporations at once. Here's one simple thing investors should watch out for in each of these companies' earnings reports. 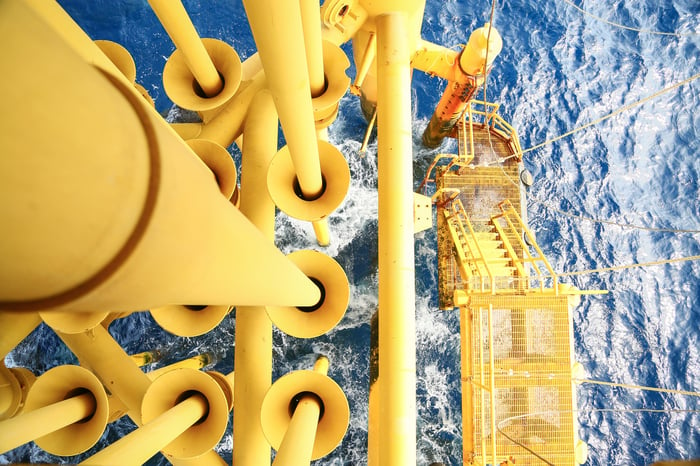 ExxonMobil: turn up the volume

In recent quarters, ExxonMobil has struggled with its production volumes, which have been in decline, unlike what's happening at Total and Chevron.

The market has been pretty cool on Exxon this year. Despite the company's generous 3.7% current dividend yield and improved second-quarter earnings, Mr. Market has already shaved 7.9% off the company's shares so far in 2017. Upbeat production guidance could help reverse this trend in lieu of further oil price increases, which seem unlikely this year.

It's all sort of puzzling, considering how good Exxon has been looking otherwise. Management's conservative strategies have helped the company maintain a solid balance sheet, and its downstream operations have been profitable in the current low-oil-price environment. Yet the stock still seems mired in bargain territory.

Long-term, production may be looking up for Exxon, thanks in part to a massive new offshore discovery in South America. Unfortunately for today's investors, the oil won't start flowing from the new find until 2020. In the meantime, investors may have to stomach more production declines.

Chevron certainly isn't concerned about its production volume, which surged 10% in the second quarter thanks to major projects that came online. As a result, the company's cash flow from operations surged, nearly doubling year over year, from just over $2.5 billion in Q2 2016 to $5 billion in Q2 2017. That enabled Chevron to cover all of its capital spending with cash flow from operations. It almost managed to cover its dividend payouts, too.

So the big question is, can Chevron keep it up, or was this just a one-quarter blip?

Chevron has managed to push its quarterly capital expenditures progressively lower over the past three years. They peaked at about $11 billion in 2014 but dropped to just $3.2 billion in Q2. That's partly due to some of those big projects that came online in Q2, converting them from capital expenses to income generators. And it hasn't done much new capital spending in the interim. So you'd expect that it could continue to improve, possibly even fully covering its capital spending and dividend with cash flow from operations. That would be a big win for the company and its investors.

Total SA: Too many baskets, not enough eggs

Total doesn't seem worried about its own capital spending. In fact, in its Q2 2017 earnings release, CEO Patrick Pouyanne touted that thanks to an improved balance sheet, his company "has the flexibility to take advantage of the low-cost environment by being able to launch profitable projects and acquire resources under attractive conditions."

In plain English, Pouyanne seemed to be hinting that a spending binge was on the way. Sure enough, during the third quarter, Total announced plans to purchase Maersk Oil in a $7.45 billion transaction, paid for through a combination of Total stock and assumption of Maersk Oil's debt. The transaction would significantly increase Total's North Sea assets. The company anticipates that the transaction will close in early 2018.

In addition, Total bought into several deepwater Gulf of Mexico plays operated by Chevron and acquired energy-efficiency company Greenflex during the quarter.  In early October, the company also announced the acquisition of additional offshore exploration blocks in Guinea.

However, in Q2, the company already acquired offshore exploration blocks in Ireland, Mauritania, Senegal, and Gabon, as well as announcing it would develop the major phase 11 of the South Pars gas field in Iran.

That's a lot of new activities -- maybe too much. Even with its strong balance sheet, Total is probably going to have to prioritize some of these projects over others. Investors should pay attention to which of these activities Pouyanne highlights as being top priority, and whether he indicates that the company's spending binge is likely to continue.

For all three of these companies, investors should look at overall performance. Oil prices have largely held steady so far this year, and if Exxon, Chevron, and Total are able to continue to remain profitable and cash flow positive in this price environment, it will indicate that they should be able to continue to do so. It will also give investors a sense of how other oil majors, such as Royal Dutch Shell and BP, may fare when they report earnings next week.

However, it's important to realize that just because they're all oil majors doesn't mean they will necessarily all fare the same. That's why looking at ExxonMobil's production volume, Chevron's fiscal discipline, and Total's spending plans are also an important part of the equation that investors should consider when deciding whether to buy.