Several hurricanes ravaged the Southern U.S. during Eagle Materials' (EXP 1.97%) fiscal second quarter, disrupting the company's operations and reducing demand for its products. However, it was able to overcome those literal headwinds thanks to strong cement pricing and the positive impact from its recent acquisition of the Fairborn cement plant from Cemex, and hit record  revenue. Meanwhile, once rebuilding begins in earnest in the areas  impacted by the storms, it should drive up demand for Eagle's cement, concrete and wallboard products. 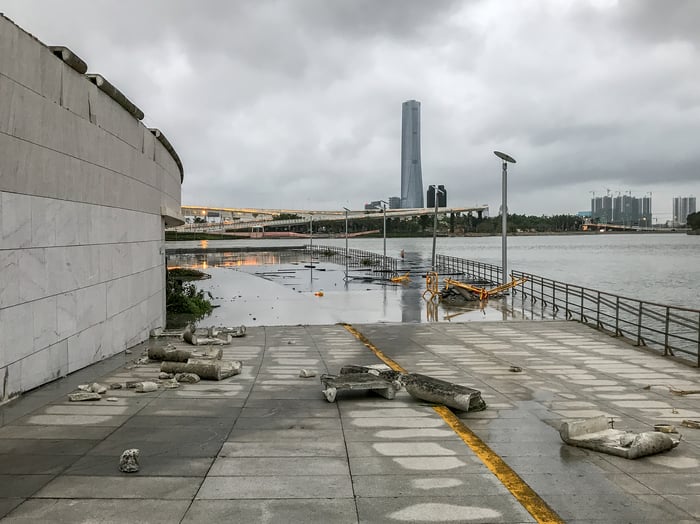 The Fairborn plant was the difference-maker:

Eagle Materials' quarterly results reflect hurricane and other weather-related operational and demand interruptions. We were more fortunate than many as our employees remained safe and our operations incurred no damage.

While none of the company's facilities sustained any damage, the storms cut its cement and gypsum wallboard sales volumes because the company temporarily suspended production at one site and couldn't get products shipped out of others due to flooding. However, it compensated for those impacts thanks to the additional volumes provided by Fairborn, as well as through a significant uptick in its oil and gas proppants business powered by a ramp-up in drilling and fracking activities across the U.S.

While the hurricanes acted as a headwind on sales volumes during the quarter, they'll likely become a tailwind for the company. Repairs and rebuilding could drive up volumes and prices for cement and gypsum wallboard. This led Powers to say that "Eagle is poised to serve our customers' additional needs as they meet the challenges of rebuilding over the coming quarters."

In addition to the anticipated improvement in the construction market, the oil and gas sector continues its slow recovery. While oilfield service giant Halliburton (HAL 3.03%) noted this quarter that drilling activities across the U.S. have slowed, which might impact near-term profitability, levels remain well above where they were last year. The led Halliburton's CEO, Jeff Miller, to say that "our North American business is hitting on all cylinders." That relative strength suggests that frack sand volumes and prices should hold up in the near term, which could eventually push Eagle's proppant segment back into the black.