The staffing company's earnings report reveals end-market improvement, but there are two areas of concern.

Leading staffing company Robert Half International Inc. (RHI -0.53%) always gives good color on employment trends, and if its latest third-quarter results are anything to go by, the job market in the U.S. is definitely improving. Meanwhile, the company's international revenue growth remains strong. That said, there were still a couple of weak areas in the company's earnings report. 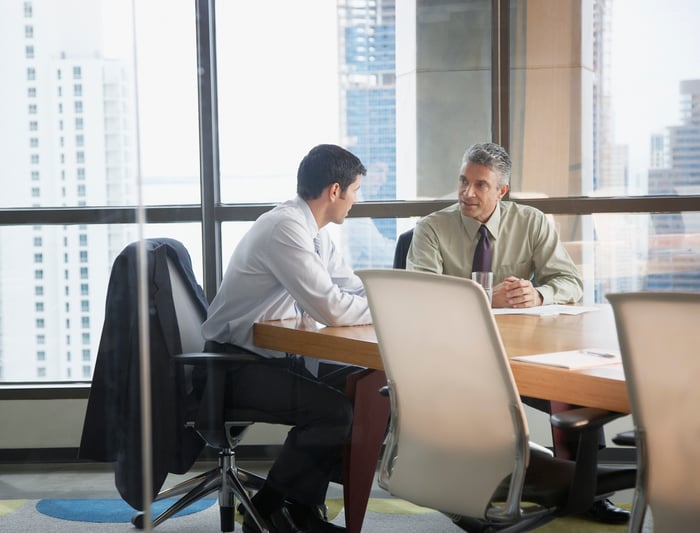 As you can see above, the results were slightly disappointing, but there are signs of underlying improvement. In fact, the guidance for the fourth quarter (management doesn't guide more than a quarter ahead) suggests better days ahead:

A breakout of growth rates in its staffing operations shows the improvement across all areas. It's notable that permanent revenue is growing more than temporary and consultant revenue for Robert Half -- this is usually a sign of an economic recovery because permanent job growth gets hit more in a slowdown and so tends to recover stronger when the overall market turns up. 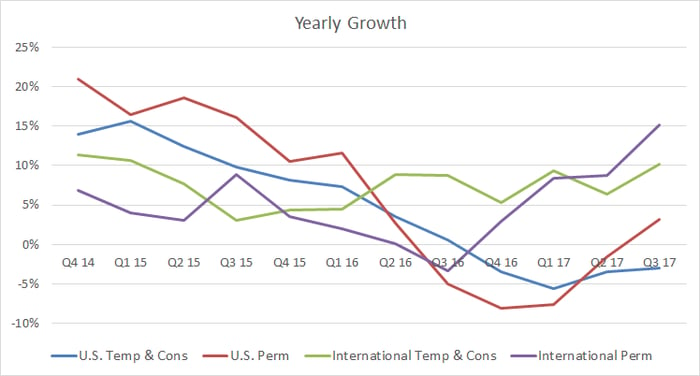 While staffing trends are improving, why did total revenue decline 1%?

The answer lies in the 2.7% decline in global Protiviti revenue -- driven by a 5.4% decline in Protiviti's U.S. operations. (Protiviti is Robert Half's consulting firm.) When quizzed on the earnings call, Waddell put the weakness down to the timing of contracts and revenue recognition, but promised that "the fourth quarter for Protiviti should be better."

The second area of concern was margin performance. Total gross margin for the quarter came in at 41.2% compared to 41.3% in the same quarter of last year. Meanwhile, operating income margin of 10% was below the 10.9% reported in last year's third quarter. Moreover, as you can see above, the fourth-quarter guidance implies revenue will grow more than earnings.

When asked about the latter on the earnings call, Waddell outlined that last year's fourth quarter benefited from around $5 million in credits, which wouldn't repeat this year. Adjusting for this effect in the fourth-quarter guidance, "gross margins are comparable," according to Waddell.

Turning to operating margin, Waddell expects "50-60 basis points lower operating margin percentages." However, a large part of this is because Robert Half has added to its head count in order to support future growth.

Investors will be looking forward to Robert Half benefiting from improving employment trends, while hopefully Protiviti will deliver the improvements management has promised. Moreover, if staffing trends continue to get better, then it's reasonable for investors to expect margin expansion next year.