Shares of police body camera maker Axon Enterprise (NASDAQ:AXON) have been on a downhill roll, slipping and sliding 11% over the last few days. This could be due in part to news breaking late last week that the U.S. Securities and Exchange Commission (SEC) has begun examining Axon's financial reports with an eye to reviewing the company's revenue recognition policies.

But the SEC is only part of Axon's problem. An even bigger problem may be brewing for Axon in Washington, D.C. 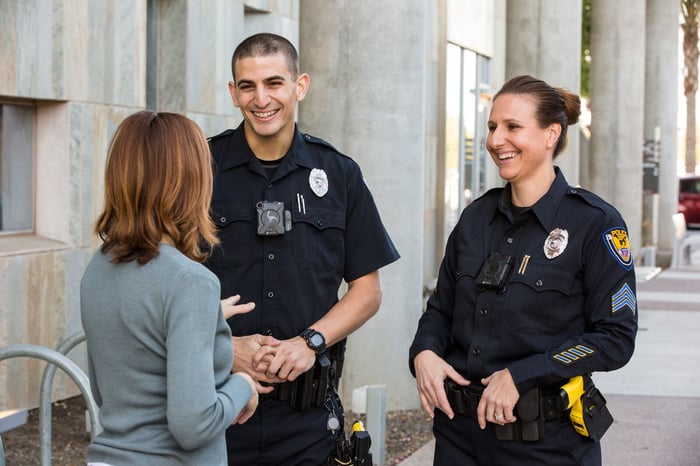 It's been nearly a decade since Axon first introduced its eponymous police body camera, the Axon Pro. Sales of the device really started surging after 2014, however, when Cambridge University released the results of a year-long study reviewing the effectiveness of Axon cameras used by the Rialto, Calif., police department over a trial period running from 2012 and 2013.

According to that study, once Rialto PD officers began consistently wearing Axon cameras, the number of complaints by civilians against the police department declined by 87.5%. The study also showed a 59% decrease in instances of use of force by police officers wearing Axon devices. Based partly on the findings from the Cambridge study, Axon CEO Rick Smith predicted that "body-worn video cameras [would become] standard equipment [for police officers nationwide] within the next 5-10 years."

5 to 10 years later, that prediction has come to pass. Last year, a report in Governing magazine noted that 95% of large police departments in the U.S. have either begun equipping their officers with police body cameras already or committed to do so in the near future.

It's no secret why. Axon estimates that each year, U.S. law enforcement organizations pay out more than $2.5 billion in legal settlements to plaintiffs alleging various acts of police malfeasance. A device capable of cutting that number by nearly 90% stands to save police departments billions of dollars annually.

But what if Axon doesn't insulate police departments from legal risk? What if it has no effect at all?

This is the troubling question raised by a new and much larger study of police behavior recently conducted by The Lab @ DC, an arm of the Washington, D.C. mayor's office. As reported in the New York Times Friday, this study, which examined the behavior of more than 2,000 police officers (half equipped with police body cameras and half not) over the course of 18 months, found no "civilizing effect" derived from the use of police body cameras.

According to research leader David Yokum and his team of scientists, The Lab @ DC randomly assigned police body cameras to 1,000 D.C. Metropolitan Police Department officers, while sending out 1,000 more officers without such videocameras. Over the course of seven months, researchers recorded "use-of-force incidents, civilian complaints [and] charging decisions by prosecutors," as well as "other outcomes" among the two groups of officers. They then compared the results.

Their findings: "On every metric, the effects were too small to be statistically significant." In other words, police wearing body cameras had zero apparent effect on decreasing use of force by policemen, or in curtailing civilian complaints about such use of force. Logically, the cameras would also have had zero effect on cutting police departments' litigation costs.

Whether this latest study out of Washington, D.C., will impact Axon's business remains to be seen. Given that so many police officers around the country are already wearing police body cameras, it seems unlikely that police departments are going to just up and throw away their video cameras on the basis of one study in one jurisdiction. Most likely, those cameras that are already "out there" will continue to be used, and continue generating Evidence.com revenue for Axon.

The study's results could, however, have an effect on the rate at which Axon is able to sell new Axon units to police departments that have not yet bought them, or additional lots of Axons to departments where they are already in use. If police departments are unable to offset the cost of cameras by showing savings in litigation costs, a slowdown in uptake could imperil future Evidence.com revenues.

All that being said, this is still a situation in flux. The NYT story noted that there is yet another report coming out in November, in Policing magazine. This report will apparently describe an Arizona State University study showing a generally favorable view among civilians of body cameras' utility in making police officers act "more just" in their encounters with the population. Logically, civilians feeling that way would be less likely to file claims and seek legal settlements, which would once again weigh in favor of police departments buying Axons.