Please ensure Javascript is enabled for purposes of website accessibility
Log In Help Join The Motley Fool
Free Article Join Over 1 Million Premium Members And Get More In-Depth Stock Guidance and Research
By Steve Symington - Oct 28, 2017 at 11:00AM

The embedded-semiconductor specialist easily beat expectations yet again in the third quarter. Here's what investors need to know.

Let's take a closer look, then, at how Cypress started the second half, as well as what we can expect from the company in the months ahead. 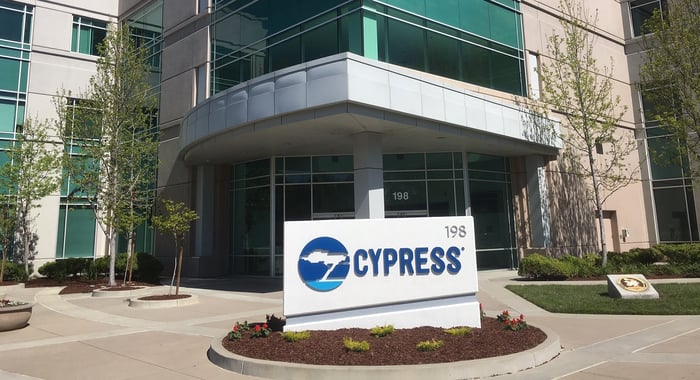 After a strong second quarter, we continued to deliver record revenue with strength across our key markets. These results demonstrate we are delivering on our Cypress 3.0 strategy of selling embedded solutions into markets growing faster than the overall semiconductor industry. Our customers are relying on us for more bill-of-material coverage, with approximately 80% of our revenue generated by customers buying more than one product family across connectivity, microcontrollers and memory.

For the fourth quarter of 2017, Cypress anticipates revenue in the range of $575 million to $610 million, adjusted gross margin of 43% to 44%, and adjusted earnings per diluted share of $0.23 to $0.27. Here again, Wall Street was looking for adjusted earnings near the low end of that range on roughly the same revenue.

That's not to say Cypress Semiconductor's overall results were jaw-dropping. But with shares already up around 35% year to date heading into this report, investors would have been hard-pressed to ask much more of Cypress than it ultimately delivered.