It's a great time to be a biotech focused on CAR-T (chimeric antigen receptor T-cell therapy). Juno Therapeutics (NASDAQ:JUNO) stock has soared so far in 2017, partially due to its own good fortunes, but also moving upwards as other CAR-T developers have experienced success.

Juno announced its third-quarter results after the market closed on Wednesday. Although financial numbers aren't as important for clinical-stage biotechs as they are for most companies, Juno still had some good news to report. Here are the highlights. 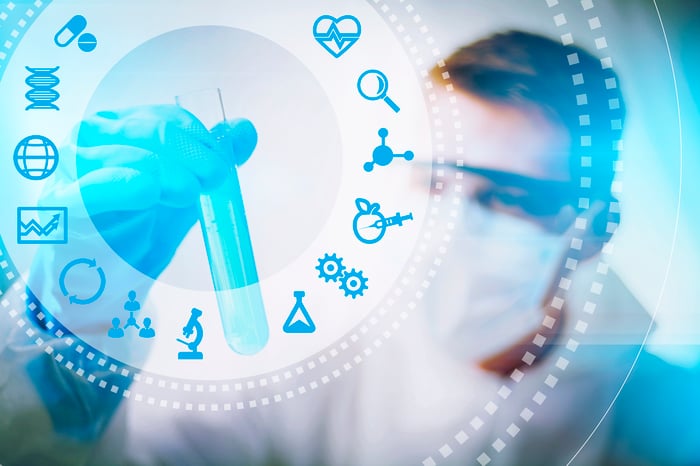 What happened with Juno Therapeutics this quarter?

Juno's revenue in the third quarter was significantly higher than the prior-year period thanks to a licensing agreement. Unlike some of its past quarters where its partnership with Celgene (NASDAQ:CELG) made the difference, this time Juno's revenue boost stemmed from its sub-license agreement with Novartis (NYSE:NVS), a company that Juno could directly compete against one day.

On the other hand, Juno's net loss worsened considerably. The company spent $140.3 million on research and development in the third quarter, more than double the R&D spending in the prior-year period. This increase is to be expected, though, as Juno advances its pipeline candidates.

The two most important numbers for Juno right now, however, can't be found on the top or bottom line of the biotech's income statement. Juno reported cash, cash equivalents, and marketable securities at the end of the third quarter totaling $1.06 billion. At the end of the second quarter, the company had a cash stockpile of $801.8 million. The sequential improvement stemmed from a stock offering that generated gross proceeds for Juno of around $318.7 million.

This cash position is critical, since Juno remains unprofitable. So is how much cash Juno is using. The biotech reported third-quarter cash burn (cash used in operating activities and capital expenditures, excluding up-front payments related to business development activities) of $54.2 million. That's lower than the $59.5 million cash burn from the same period in 2016.

We are pleased with the potential best-in-class profile for JCAR017, and we look forward to presenting an updated dataset at the upcoming ASH conference. The clinical data continue to support our belief that a defined cell product can improve patient outcomes. Our broad clinical development programs and ongoing infrastructure and manufacturing investments remain a key part of our strategy to deliver on the potential of CAR T cell therapies for cancer patients across a broad array of diseases.

There are several key things to watch with Juno in the months ahead. As Hans Bishop mentioned, the biotech is scheduled to present new clinical data from the early-stage Transcend study evaluating CAR-T drug JCAR017 in treating relapsed or refractory aggressive B-cell non-Hodgkin lymphoma at the American Society of Hematology (ASH) meeting in December.

Juno is enrolling in the pivotal cohort of the Transcend study of JCAR017. If all goes well, the biotech could file for approval in the second half of 2018. Celgene exercised its option for the experimental CAR-T drug last year and is counting on it to eventually generate peak annual sales of at least $1 billion.

Another development to watch is how well Novartis' launch of its CAR-T therapy, Kymriah, goes. The U.S. Food and Drug Administration approved Kymriah for treating relapsed or refractory B-cell precursor acute lymphoblastic leukemia (ALL) in August. Juno stands to receive royalties on all U.S. sales of Kymriah under its sub-license agreement with Novartis.

Juno appears to be in a pretty good position to be successful with JCAR017 even though two CAR-T therapies have already been approved. However, the road to regulatory approval can be bumpy -- and sometimes has a dead end. Juno remains a high-risk stock to own, but the potential rewards are also high.