Expenses related to developing the tech of the future -- and new models to better compete with Mercedes-Benz -- cut into the automaker's third-quarter earnings.

German luxury-vehicle maker BMW AG (BAMXF -2.42%) revealed in its third-quarter earnings release Tuesday that its pre-tax profit for the period fell 6% from its year-ago result, to 2.42 billion euros ($2.81 billion), due in part to higher spending for new models and advanced technologies.

But despite the Q3 profit decline, BMW raised its full-year pre-tax profit guidance. 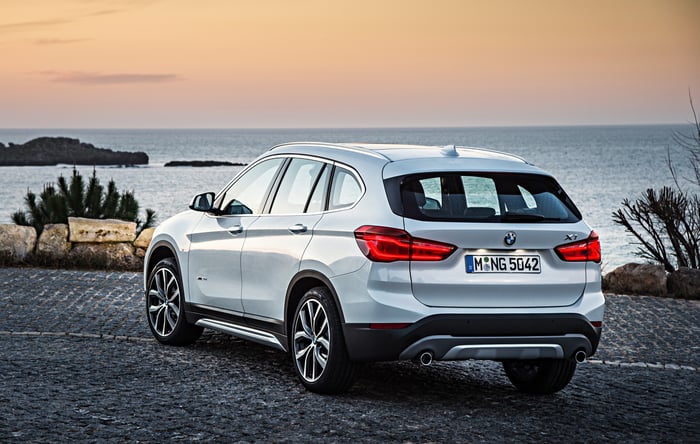 Sales of BMW's smallest SUV, the X1, are up nearly 40% this year. The X1 has been in particularly high demand in China. Image source: BMW AG.

What happened at BMW during the third quarter

In a nutshell, BMW's profit fell due to a few factors:

BMW was the world's leading seller of luxury vehicles for about a decade, but it lost that top spot to archrival Mercedes Benz (a unit of Daimler AG (DDAI.F -8.43%)) in 2016. It's looking to those new models to help it regain that sales title.

Here's how BMW's results broke down across its three principal business segments.

What BMW's CEO said about the quarter

CEO Harald Krueger talked up BMW's investments, emphasizing their effects on employment, a key issue in the company's home country of Germany.

We are resolutely doing things the BMW way, keeping our promises and raising the bar for our own ambitious targets. We are investing substantially in tomorrow's mobility, enabling us to maintain our leading position of innovation and sustainable employment. In this way, we remain a dependable partner for society, policymakers and the environment as well as one of the most attractive employers worldwide.

An increase to full-year guidance

BMW had previously said that it expected "slight increases" in 2017 in deliveries and pre-tax profit from their record 2016 levels, as well as an EBIT margin for its automotive segment in the range of 8% to 10% for the year. It tweaked that forecast a bit in its Q3 report: It still expects a "slight increase" in deliveries, but now expects a "solid" increase in pre-tax profit, both to new record levels.

But, Krueger noted, BMW's research and development expenses would likely be higher again in the fourth quarter.