In its third-quarter financial report last month, insurer Chubb Corporation (NYSE: CB) told investors that it suffered pre-tax losses of $1.9 billion after paying out claims for customer damages from hurricanes Harvey, Irma, and Maria this year. These losses looked awful compared to last year's Q3 profit of $1.4 billion, and left Chubb with a net loss of $70 million for the quarter -- but that's great news.

On a per-share basis, Chubb's net loss worked out to $0.13 per diluted share, which according to StreetInsider.com (requires subscription) was $0.11 better than the $0.24 that Wall Street had expected the insurer to lose. It may have taken two weeks for this news to sink in, but on Wednesday morning, Chubb received its reward when investment banker JPMorgan announced it was upgrading Chubb stock to overweight and assigning Chubb stock a $175 price target. 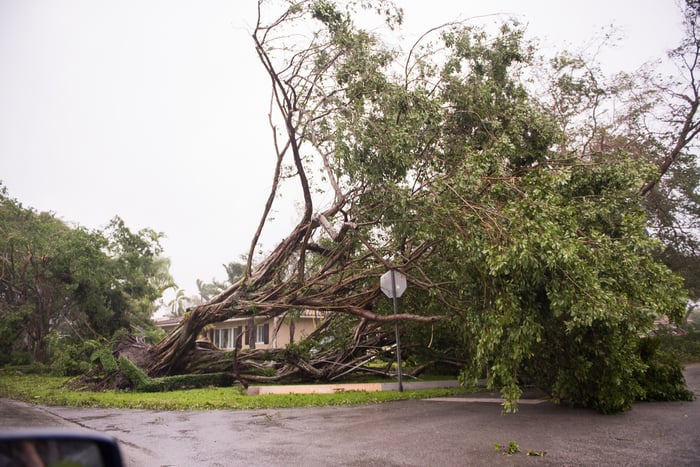 Hurricane Irma did a number on Florida, but it can't knock Chubb stock down. Image source: Getty Images.

1. When bad news is good news

It's a little-understood dynamic (among insurance payers), but catastrophes such as the string of hurricanes that pummeled the American South this year can actually be good for insurers in the long term. This is because large, headline-making catastrophes provide insurers with ammunition for arguing that their risks are so high that they simply must raise rates to cover them.

In the case of Chubb, JPMorgan believes that the company will be able to charge more for property and casualty insurance "following Q3 catastrophic losses." And yet, it's a maxim in the insurance industry that bad years are often followed by good years, hurricane-wise. For example, 2005 was a bad year for hurricanes, featuring most notably Hurricane Katrina -- but also three other three other Category 3 hurricanes. And yet, 2006 was a quiet year for hurricanes, and 2007 featured only one Category 1 storm in the U.S. Similarly, the year following Hurricane Sandy's arrival in 2012 was also a quiet one.

Result: It's often the case that no sooner are insurers able to raise rates in anticipation of risk, then that risk evaporates -- leaving profits for insurers in its wake.

This can be especially good news for investors in stocks that are adept at handling risk to begin with. Here at The Motley fool, one of our favorite tools for evaluating how good insurance company managements are at handling risk is the property and casualty combined ratio. Essentially, the combined ratio measures an insurer's losses and expenses divided by the company's earned premiums in a year. And Chubb's combined ratio is one of the best.

According to data from S&P Global Market Intelligence, Chubb's combined ratio surged to 110.8% last quarter, indicating that for every one dollar in premiums Chubb took in, it paid out nearly $1.11 in claims and expenses.

That doesn't sound so great. However, Chubb's combined ratio last year was a mere 88.7%, and the company has held its combined ratio below 100% (i.e., it has insured claims profitably) for the last 15 years straight.

Chances are, once losses from the 2017 hurricane season roll off the books, Chubb will be raking in the profits once again.

How good is Chubb at earning profits from the insurance business? Let's compare it to a few high-profile rivals. At Travelers Companies (NYSE:TRV), the combined ratio last year was 92% -- 330 basis points worse than Chubb. What's more, Travelers hit a 100%-plus combined ratio as recently as 2011.

At AIG (NYSE:AIG), last year's combined ratio was a staggering 133.1% (i.e., incredibly unprofitable). Indeed, AIG has scored a combined ratio below 100% once in the past decade.

In all three years, Chubb outperformed master investor Warren Buffett's flagship insurance vehicle -- racking up a total of 2,030 basis points' worth of outperformance across the three years. JPMorgan calls this "excellent catastrophe management" by Chubb, and I cannot help but agree.

Admittedly, such quality as we see at Chubb does not come cheap. Priced at 13.2 times earnings today, Chubb stock is pegged for no better than 6.7% annualized long-term earnings growth by most analysts who follow it. Combined with a 1.9% dividend yield, that works out to no more than an 8.6% expected return on this 13.2-times-earnings stock, which doesn't look like any great bargain.

That said, given the quality Chubb is exhibiting, the stock is certainly worth watching -- and at the right price, worth buying as well.