Investors were gobbling up GrubHub Inc (NYSE:GRUB) shares last month as the food-delivery specialist climbed 16% according to data from S&P Global Market Intelligence. A strong third-quarter earnings report was the key driver of its October gains. 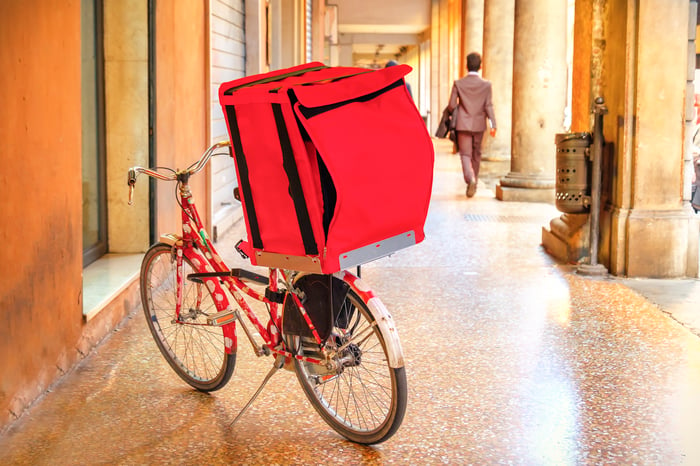 As the chart below shows, the stock surged higher after the report came out on Oct. 25. 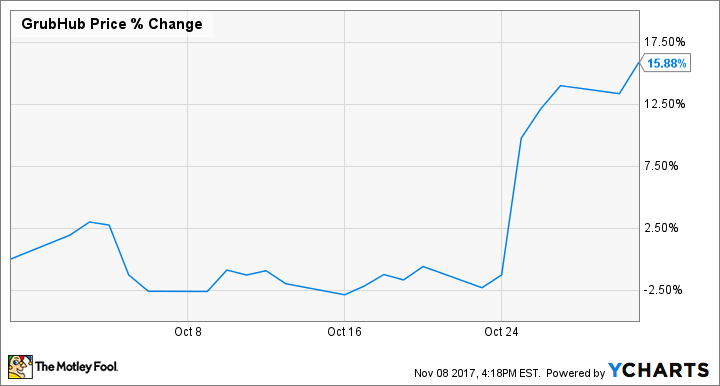 The country's leading food-takeout marketplace posted another round of impressive results as revenue jumped 32% to $163.1 million, beating analyst estimates at $159.6 million. Gross food sales in the quarter increased $867 million, active diners jumped 28% to 9.81 million, and daily average grubs, or orders, were up 14% to 304,500. On the bottom line, adjusted earnings per share scooted up from $0.23 to $0.28, which topped expectations at $0.24.

The results benefited from acquisitions of Foodler and 27 of OrderUp's markets, both of which closed during the quarter. After the period, GrubHub closed on its acquisition of Yelp's Eat24 for $288 million.

GrubHub's performance was the latest evidence that the company is strong enough to resist challenges from competitors like Amazon and Uber, and with the Eat24 deal, its market leadership will only become more entrenched. It already has a majority of market share in seven of the 22 largest cities in the U.S., including New York, Chicago, Boston, and Philadelphia, and it has a plurality in a handful of others.

Looking ahead, the company called for revenue of $197 million to $205 million in the current quarter, which was well ahead of the consensus at $181.9 million as the company will benefit from the Eat24 acquisition. At the midpoint of that guidance, revenue would increase 46%.

GrubHub shares are now up 66% year to date. With Facebook's recent decision to allow food ordering on its platform, the company's consolidation through acquisitions, and a secular tailwind as more Americans turn to e-commerce, the stock looks to have a bright future ahead of it.