For your reference, management's guidance for the third quarter pointed to GAAP earnings of roughly $0.93 per share on sales of $2.35 billion. The company crushed both of these targets with vigor and zest.

The company provided the following approximate financial targets for the fourth quarter. 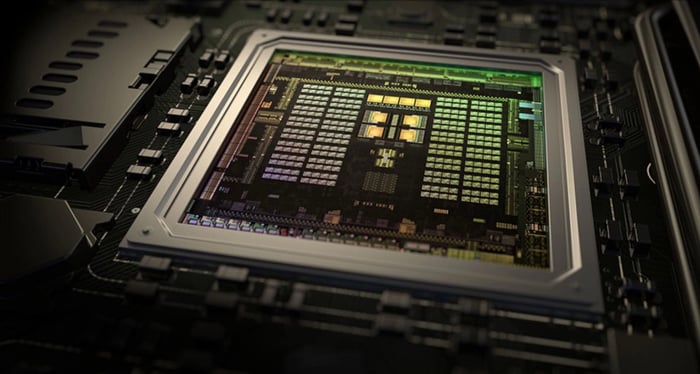 The Tegra X1 chip up close and personal, as seen inside the Nintendo Switch console. Image source: NVIDIA.

In a prepared statement, NVIDIA CEO Jensen Huang underscored the breadth of his company's success stories:

Industries across the world are accelerating their adoption of AI. Our Volta GPU has been embraced by every major internet and cloud service provider and computer maker. Our new TensorRT inference acceleration platform opens us to growth in hyperscale datacenters. GeForce and Nintendo Switch are tapped into the strongest growth dynamics of gaming. And our new DRIVE PX Pegasus for robo-taxis has been adopted by companies around the world. We are well positioned for continued growth.

And the beat goes on. The Pascal processor architecture continues to keep customers loyal while opening up new business avenues. Cryptocurrency mining is a serious tailwind at NVIDIA's back, and the automotive-computing market promises fantastic growth for years to come.

The company is chasing many growth markets at once here, executing crisply over the last several quarters. Now, NVIDIA needs to keep the good times rolling in order to protect these sky-high share prices -- the stock is trading at more than 50 times trailing non-GAAP earnings now. That's on the upper end of NVIDIA's recent P/E readings.