The world of retail is changing before our eyes. One-time stalwarts of the mid-20th century are going out of business, and e-commerce is taking their place. While that means massive upheaval for some, it also means massive opportunities for others.

At the forefront are two upstart companies: Shopify (NYSE:SHOP) and PayPal (NASDAQ:PYPL). The former helps small businesses create a presence on the Internet, and the latter offers an easier and cheaper way to pay for goods and services. Both stocks have been huge winners over the past few years. 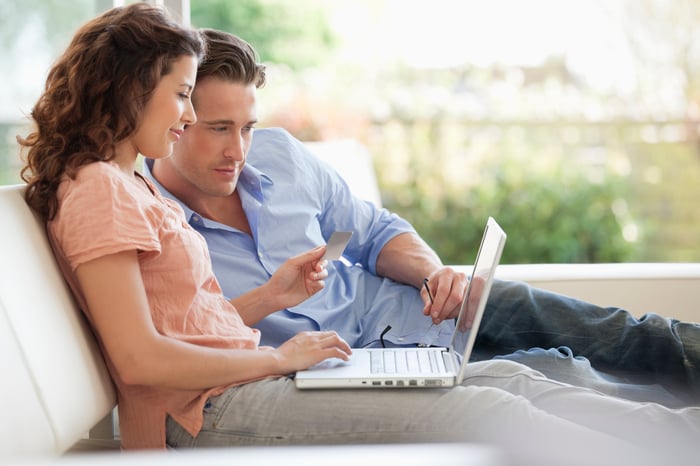 But which is a better stock to buy today? That's not an easy question to answer. But by looking at the companies through three different lenses, we can get a better idea of what we're getting when we buy shares of either of these companies.

For investors with a long-term time horizon, there's nothing more important than investigating a company's sustainable competitive advantages -- otherwise referred to as a "moat." In the simplest sense, a moat is what separates a company from all of its competition -- keeping customers coming back for more week after week, while holding the competition at bay for decades.

PayPal's key moat is provided by the network effect. As more and more customers sign up to use PayPal, more and more vendors are incentivized to accept it as a form of payment. That of course encourages still more consumers to sign up. It's a virtuous cycle. And during the most recent quarter, the company gained 8.2 million accounts -- growth of 88% from the same time last year.

But it's worth noting that this network effect has some weaknesses. Lots of different payment methods benefit from the same effect, and there's no inherent advantage that guarantees PayPal will come out ahead over the long run. Venmo, the company's person-to-person payment solution, has caught fire, but the network effect of the app has yet to show it can withstand an onslaught of competition.

Shopify, on the other hand, benefits from two forms of moats. The first is high switching costs. While the company hasn't reported dollar retention rates, there are powerful factors that keep vendors logged into Shopify's subscription model. Once a company has its website and e-commerce infrastructure set up on a platform -- including shipping, payment, and fulfillment options -- they are loath to switch. It would be costly both financially and in terms of time spent on migration.

But Shopify also benefits from the network effect. As the number of merchants using Shopify has surged to over 500,000, third-party app developers have started building out Shopify's ecosystem. That means there are more tools for vendors to use, which entrenches them in the Shopify world even further.

Because of this two-fold moat, I'm giving the nod to Shopify here.

Anyone who invests in these companies knows that they are primarily focused on growth. That's why it's not surprising to see lots of revenue being piled back into growth initiatives. But while those initiatives are exciting, there's something to be said for keeping a pile of cash on hand.

That's because -- at one time or another, and without exception -- every company will face difficult economic times. Those with lots of cash can actually emerge stronger as a result: they can buy shares back on the cheap, outspend rivals to gain long-term market share, or even acquire the competition.

Here's how these two stack up, keeping in mind that PayPal is valued at over nine times the size of Shopify.

While as a shareholder I'm not concerned about Shopify's lack of profitability, this is an undeniable win for PayPal. While both companies have the enormous advantage of carrying no long-term debt, the fact that PayPal is racking up billions in free cash flow while Shopify isn't makes this an easy call.

Finally we have valuation. This is part art, part science; there's no one metric that really gives a full picture of how cheap or expensive a stock is. Here are four that I like to use to get a more holistic picture of what I'd be paying for as an investor.

Neither of these companies would be considered "cheap" in a traditional sense. But given that Shopify isn't yet bringing money in, and that it trades for a steep premium to PayPal in the price-to-sales ratio, PayPal once again wins this matchup.

This is a bit odd for me. While Shopify has the stronger moat, PayPal has more financial fortitude and a more favorable valuation -- giving it the win in this competition. I say "odd" because I don't own shares of PayPal, while Shopify makes up 4% of my real-life holdings.

While I don't plan on selling Shopify any time soon, I now need to give a closer look at PayPal and give it a green thumb on my CAPS profile. I think you should consider doing the same.