Now that the merger talks are dead, Sprint is looking to compete more aggressively with T-Mobile again.

Back in early September, T-Mobile (TMUS 1.72%) unveiled its most recent Un-carrier move: bundling Netflix (NFLX 4.15%) for free with its T-Mobile One family plans. The Netflix plan that is included is the standard plan that costs $10 per month, so the $120 per year in savings can offset a month's worth of cellular service, as T-Mobile One family plans start at $120 per month for two lines.

This all comes as wireless service providers continue to bundle more and more content to differentiate themselves and strengthen customer retention. The big difference is that larger rivals Verizon and AT&T are making ginormous acquisitions in order to own the content that they want to bundle. Not only do the smaller carriers lack the balance sheets to pull off such acquisitions, but they also don't appear to be that interested in doing so, as it's possible to achieve the same goal by partnering. You don't necessarily need to own the content to deliver a compelling value proposition. 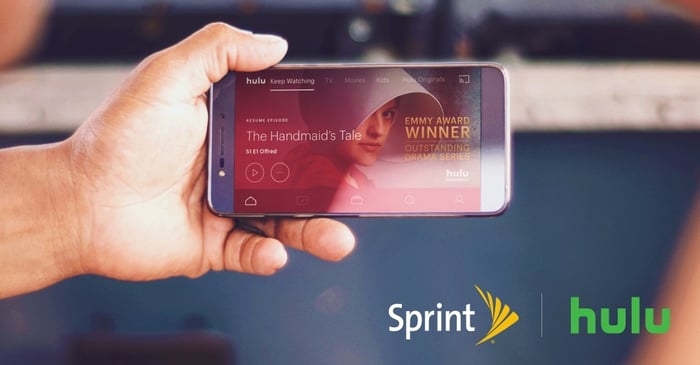 No. 4 carrier Sprint (S) has just announced its response: bundling Hulu in with its Unlimited Freedom plans.

Everything you need to know about the offer

Hulu offers two tiers for paid plans: no commercials for $12 per month, and limited commercials for $8 per month, the latter of which is what Sprint is including. Hulu launched a live TV service earlier this year that includes sports and news, popular categories for live TV, that starts at $40 per month. Sprint says it will add an upgrade option soon that allows subscribers to add the upgrade.

Sprint is being slightly more aggressive than T-Mobile, offering the bundle to all Unlimited customers instead of just those on family plans with at least two lines. But remember that strictly in financial terms, the offer has less value based on the specific plan being bundled. Now that Sprint and T-Mobile have officially called off their merger talks, it's time for them to compete more aggressively once again -- and take jabs at each other on social media.

Hulu also isn't nearly as popular as Netflix in general. Recode reported last month that 25% of U.S. consumers subscribe to Netflix, or over three times the 7% that subscribe to Hulu, according to data from Second Measure.

Netflix officially had 52.8 million total memberships in the U.S. at the end of the third quarter. Hulu, which is owned by a consortium of media conglomerates, does not regularly disclose subscriber metrics. The last official disclosure was that Hulu had 12 million total subscribers in early 2016. If AT&T's proposed acquisition of Time Warner goes through, AT&T will effectively be part owner of the service that Sprint is now bundling, as Time Warner acquired a 10% stake in Hulu last year for $583 million.

While these content bundles are welcome offers for consumers, it's hard to say if they will help attract new customers or strengthen retention of existing ones. That's actually another benefit to partnering instead of acquiring though, because if the strategy proves to be unsuccessful in driving customer additions, the partnerships can easily be dissolved if either party is unhappy with the results. But when it comes to megamergers, breaking up is hard to do.