Healthcare investors tend to focus all of their attention on biotechnology or pharmaceutical stocks. That's a shame, because the medical device industry has some wonderful traits that make it a great hunting ground.

For example, some medical devices require users to go through an extensive training period. While that can slow adoption, once they are comfortable with a certain device, those same users tend to become highly resistant to trying a competitor's product. That creates brand loyalty, which smart companies can use to drive big profit growth.

I spent a decade working in the medical device industry, so I saw the power of that brand loyalty firsthand. As a result, I now track the progress of several dozen medical device companies closely.

Here's a list of 10 medical device companies that I currently keep tabs on, along with their areas of focus:

So which of these stocks do I think are buys right now? Here are my top three choices.

Roughly one out of every four adults worldwide suffers from sleep apnea. This chronic condition causes breathing to become shallow or even stop for a few seconds, which leads to poor sleep quality. Left untreated, sleep apnea can greatly increase the risk of heart attack, stroke, diabetes, and many other comorbidities.

One way to treat sleep apnea -- and a number of other sleep-disorder breathing conditions -- is to use a continuous positive airway pressure, or CPAP, machine. These devices use a pump, tubing, and mask to ensure that a patient's airway remains open all night long.

ResMed has been championing the use of CPAP machines since it invented the treatment a few decades ago. Fast-forward to today: ResMed now sells a range of products and services that help to diagnose or treat a number of sleep disorders. All told, the company generates more than $2 billion in sales each year. 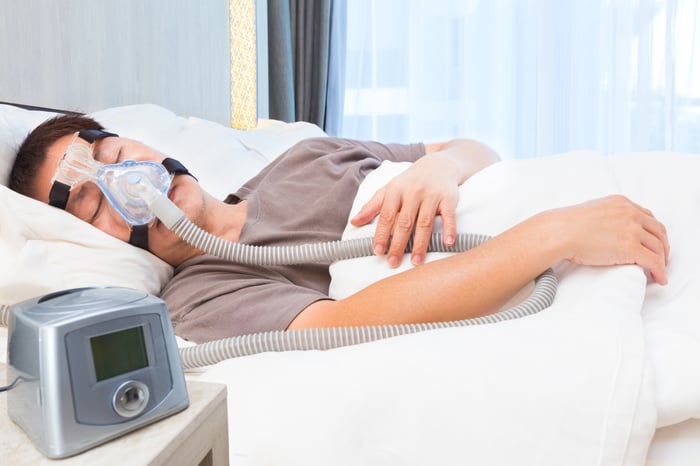 While ResMed's industry-leading products have propelled its top line higher for years, the company firmly believes that it is still in the very early innings of its growth phase. That confidence stems from the fact that only about 15% of potential patients in developed markets like the U.S. and Europe currently utilize a CPAP machine. That number falls to well under 1% in emerging markets like China, India, and Brazil. These figures suggest that the opportunity ahead is still huge.

While I think the company's future looks bright, what attracts me most to ResMed's stock is that its CPAP machines require users to constantly purchase new masks, tubes, and other accessories that require frequent changing. This fact provides the company with a predictable stream of recurring revenue that can be used to fund research and development, make occasional acquisitions, and enrich shareholders.

While ResMed isn't the fastest-growing medical device company that I follow, I think this is a dependable business that should be able to post above-average revenue and profit growth for years to come. Adding in a dividend that currently yields 1.6% and consumes about half of profits is icing on the cake.

Diabetes is a chronic disease that occurs when the body loses its ability to effectively utilize glucose. Left untreated, sufferers' glucose can rise to unhealthy levels, which can lead to comorbidities like hypertension, heart disease, kidney disease, and more. 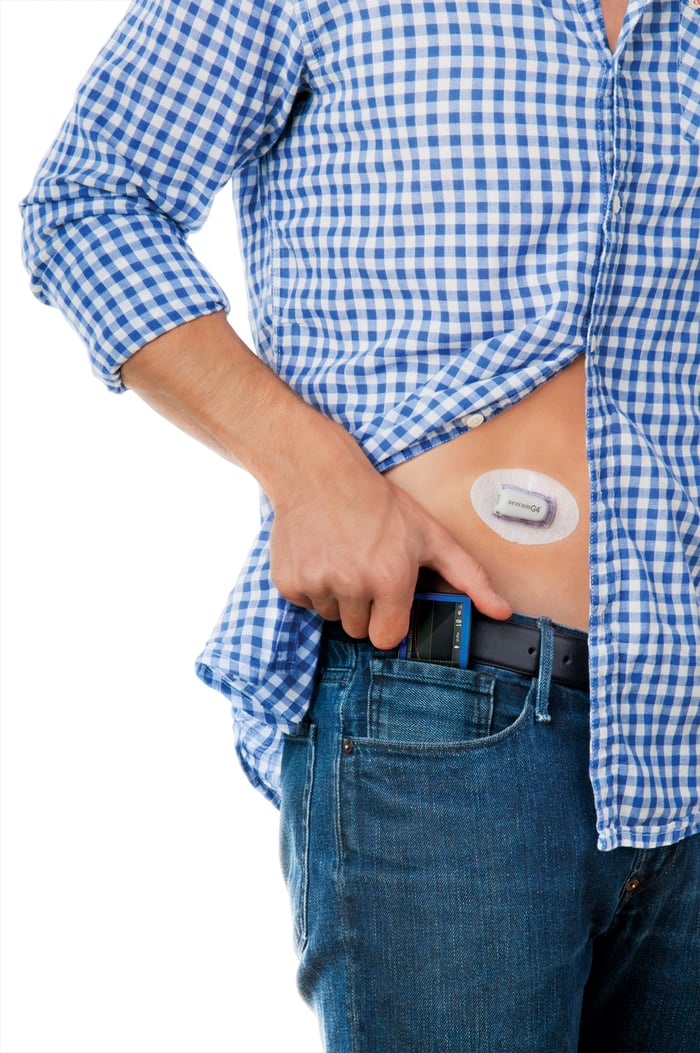 Treating diabetes requires patients to constantly track their glucose levels and take action when necessary. For decades that meant endless finger-pricking to obtain readings through a point-in-time monitor. However, since glucose levels change rapidly throughout the day and finger pricks can cause pain, this solution was far from ideal.

More than a decade ago DexCom launched an innovative continuous glucose monitoring (CGM) system that allows patients to see their glucose levels changing in real time, allowing them to take action before their numbers get out of whack. The diabetes community has welcomed this device with open arms, driving huge revenue growth. In turn, the company's stock became a Wall Street darling and early investors made out like bandits.

However, traders absolutely mauled DexCom's stock in late 2017 after the U.S. Food and Drug Administration approved Abbott Laboratories' FreeStyle Libre Flash Glucose Monitoring system, a device that could be a serious threat to DexCom's growth. So at first glance, the huge sell-off appears justified.

However, this Fool doesn't think that DexCom's growth days are over for a few reasons:

Add it all up, and I'm still quite bullish on DexCom's long-term growth potential. With shares currently trading at a far more reasonable valuation, I think this is a great stock to consider.

While we've made a lot of progress in the battle against cancer over the last few decades, the harsh reality is that cancer still claims more than 600,000 American lives each year. That number speaks volumes about the need for new therapies.

One company that is championing the use of a brand-new technology in this fight is NovoCure, which discovered a few years ago that highly tuned electric fields could be used to disrupt cell division in tumors. The company called this new modality of treatment "tumor treating fields" (TTFields), and spent more than a decade developing it. In 2011, the company's hard work paid off when the FDA cleared its device -- called Optune -- for sale in the U.S. as a treatment for glioblastoma multiforme (GBM), a deadly form of brain cancer.

To use Optune, patients place a series of transducer arrays on their heads near where their tumors reside. When a user then flips on the device, Optune creates a series of electric fields that go to work on the tumor. (There's a wonderful TED Talk that shows Optune in action.)

What's so attractive about TTFields is that the electric fields have almost no effect on other cells in the body. As a result, Optune users experience very little in the way of side effects. That's a highly attractive advantage when compared to other cancer treatments like chemotherapy and radiation. When combined with clinical data showing that TTFields actually works, it isn't hard to figure out why Optune has grown like wildfire over the last few years:

While NovoCure's growth has been strong since launch, there are plenty of reasons to believe that the story is just getting started. Management believes that less than 10% of eligible patients are currently utilizing TTFields therapy in GBM, providing the company with ample running room. What's more, NovoCure believes that Optune could eventually be used to treat a range of other cancer types, such as mesothelioma, and lung, ovarian, and pancreatic cancers. If true, then this company's upside potential is truly massive, especially considering that NovoCure is currently the only company focusing on TTFields therapy.

With no competition in sight and a game-changing therapy in its bag, NovoCure might just be the fastest-growing cancer company you've never heard of. That's why I think this is a great medical device stock for patient investors to buy and hold.