It's well-known that gun industry sales are running slower than last year's record pace, but now they're also starting to seriously lag 2015's rate, and that means firearms manufacturers could face an even more perilous slump than previously feared. 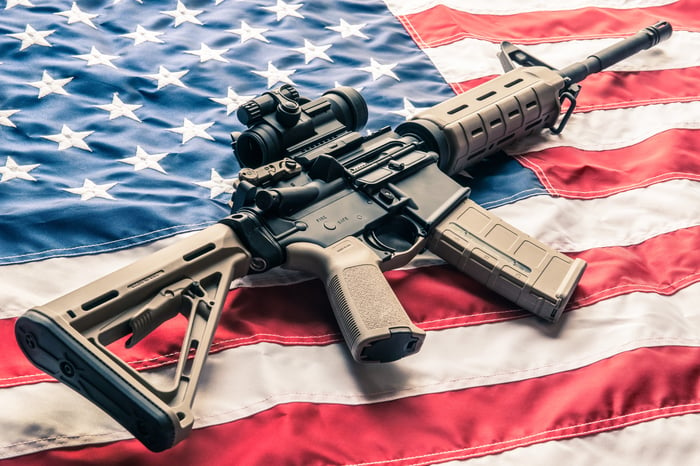 The business of America is business

In September, President Trump proposed making it easier for gunmakers to sell firearms internationally by transferring oversight of the process from the State Department to the Commerce Department. There is considerable red tape at the State Department, which has something of a national security mind-set in erecting barriers that manufacturers need to go through to export firearms that might not exist if the Commerce Department, with its business-oriented outlook, took over. The former would still have oversight of military-grade weapons, such as machine guns and rocket launchers.

The National Shooting Sports Foundation (NSSF) estimates gun sales could surge anywhere from 15% to 20% by the move, though how quickly gunmakers could benefit remains sketchy. Most gunmakers are only focused on the domestic market and even the largest manufacturers don't dedicate much resources to the effort.Last year both American Outdoor Brands (NASDAQ:SWBI) and Sturm, Ruger (NYSE:RGR) said only 3% of their firearms sales came from exports.

Still such a development will be helpful if the firearms industry is to be kept from falling into a worse slump than it's already in.

The calm after the storm

There was no question the industry was going to be hard-pressed to repeat last year's performance. The politically charged atmosphere and the potential for new restrictions on gun ownership spurred gun owners and enthusiasts to purchase record numbers of firearms ahead of the election. While sales did ease significantly this year, it was noteworthy they were still running ahead of the pace set in 2015, the prior record year. It suggested the industry was still healthy as the trend was still rising.

However, for the fourth straight month now, adjusted criminal background check data shows 2017's numbers running falling short of the rates set two years ago and it's possible it could finish the year below those numbers.

Criminal background checks don't translate into a one-to-one benchmark for gun sales, but they're a good proxy for consumer demand. The FBI releases raw data every month showing the number of background investigations conducted and last year they hit a stunning 27.5 million, or 21% more than in 2015. So far this year, the law enforcement agency has conducted over 20.2 million background checks, about 9% below last year's rate.

Yet the FBI's numbers also include data from states that sweep their records looking for among other things existing permit holders that may have committed a crime that makes them no longer ineligible to own a gun. That inflates the number of potential gun buyers. The NSSF recalculates the FBI's raw data removing those checks to give a closer approximation of actual gun buyers in the market. What their revised data shows is a significant weakening in gun industry sales.

Up until June 2017, background checks were running about 8% higher than the number conducted in 2015 (and about 7% below last year). That showed people were still interested in buying guns even if they weren't purchasing them at the breakneck pace they did a year ago. 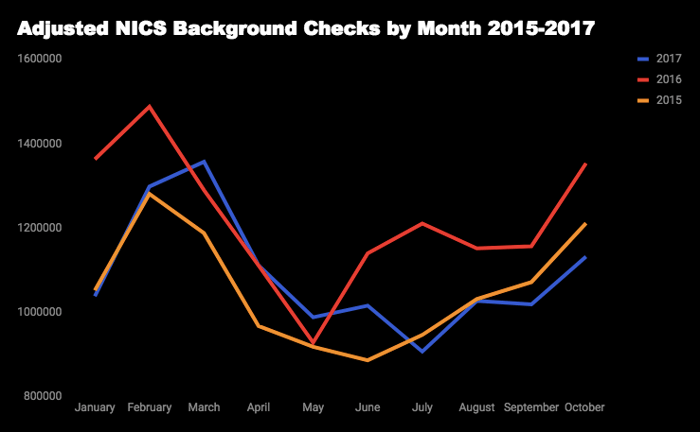 However, over the last four months, the number of investigations conducted in 2015 have outpaced those done in 2017 by almost 4%, and October's numbers were 6.6% behind those from two years ago, indicating the fall-off is accelerating, and this despite several tragic mass shootings that in years past would have spurred greater gun sales.

It's possible if the trend continues, the firearms industry will see fewer sales this year than it did in 2015.

That is why the Trump administration's proposal would be a boon to the likes of American Outdoor Brands and Ruger. The former reported in September quarterly firearms sales were down nearly 50% for the period while the latter said two weeks ago its sales were off by 35%.

The effort to switch oversight of gun exports could be achieved within the first six months of 2018. Reuters, which exclusively reported the news two months ago, said the process requires the Office of Management and Budget to review the proposal before soliciting public comment, after which the change could be made.

It wouldn't necessarily be an easy sell, as many existing gun manufacturers are already European-based and entrenched in markets there, and some countries outright ban private ownership of firearms.

There's been no update to the progress of the initiative thus far, but it's not so different than the 2013 policy change initiated by the Obama administration that transferred to Commerce from State oversight of the sale of military spare parts and equipment.

With firearms manufacturers sales sagging and U.S. gun buyers declining, the change can't come soon enough. Until then, however, and only after they work through their current inventory glut, investors can expect gunmaker stocks to remain depressed.