One of the most predictable trades on Wall Street is going to script on Wednesday, as stocks associated with the firearms business are trading up after a big Democratic Party win at the polls. Shares of Smith & Wesson Brands (NASDAQ:SWBI), Sturm, Ruger (NYSE:RGR), and Vista Outdoor (NYSE:VSTO) all were up double digits at noon EST after the Democrats appeared to secure two Senate seats in Georgia.

Politics is almost never as simple as pundits try to make it, but the conventional wisdom is that the Democrats favor gun control. For that reason, we tend to see a surge in firearm sales when the Democratic Party is in control, on consumer fears they need to either buy now or miss their opportunity. 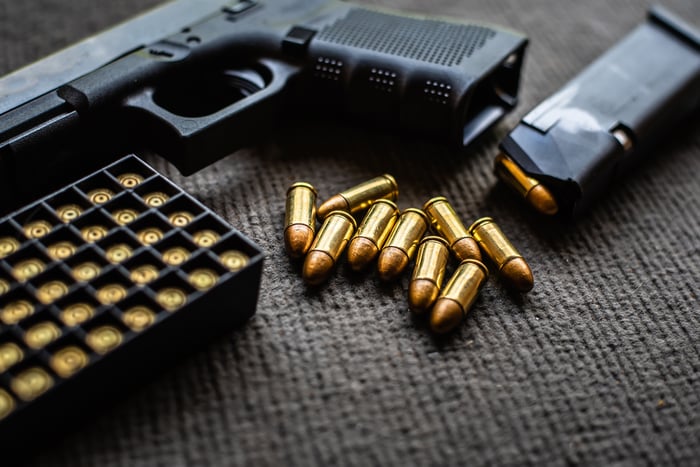 On Tuesday night, the Democrats appear to have flipped two Georgia Senate seats, creating a 50-50 split in the Senate that gives Democratic Vice President-elect Kamala Harris the deciding vote. That has triggered investors to buy into an expected rally in gun sales, causing the stocks to push higher.

There were already signs of increasing demand based on the November election results. Required firearm sale background checks rose 34% year over year in December, according to data released by the Federal Bureau of Investigation, with December coming in as the highest month for checks in 2020. Background checks for the year came in at 39.69 million, up 40% from 2019.

Sturm, Ruger and Smith & Wesson are both firearm makers, while Vista Outdoors manufactures a portfolio of ammunition and shooting sport accessories.

Vista Outdoor shares are also getting a boost from some Wall Street commentary. Roth Capital analyst Matt Koranda on Wednesday resumed coverage with a buy rating, saying the company is well positioned to capitalize on an expected up-cycle in ammunition demand. B. Riley Securities analyst Eric Wold, meanwhile, said in a separate note that while the Georgia results create added volatility around the sector, he sees a favorable demand environment regardless of the outcome.

As predictable as these rallies are, they don't mean much for a long-term investor. These tend to be cyclical stocks, and as Wold notes, the demand trends look favorable regardless of who is in Washington.

Gun stocks aren't for everyone, but Vista Outdoor does offer a range of brands focused on hikers and other outdoor enthusiasts as well, for those interested in investing in the great outdoors. For investors who follow the three stocks, there should be opportunities for further appreciation in the months to come.