After Match Group (NASDAQ:MTCH) reported its third-quarter results, its leadership team shared some important information with investors during the subsequent conference call.

Here are the highlights for long-term shareholders. 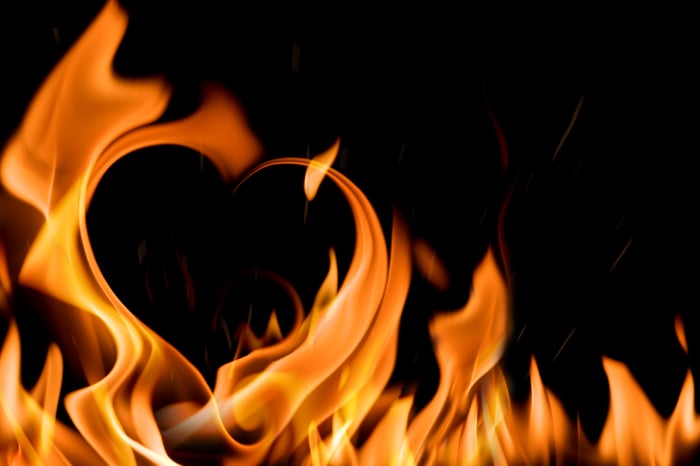 2. The impact of Tinder Gold

With its user growth surging, Match Group is stepping up its efforts to monetize Tinder. The company recently launched Tinder Gold, which allows Tinder Plus members to gain access to a new "Likes You" feature for an additional $4.99 per month. (Free users can also subscribe to Tinder Gold for a total of about $15 per month.) The Likes You feature -- which tells you who has swiped right on your profile before you've done the same -- has proved popular among Tinder users. That's led to a surge in Tinder Gold subscriptions, and a corresponding spike in Tinder's average revenue per user.

In particular, you're going to see us start to make changes to the product that leverage what I think are a true competitive advantage in the space. These advantages really fall into three buckets: First, our users are all here to meet someone new. And this clear intent differentiates us from traditional social media products.

Second, our large scale differentiates us from other dating products. ... And then our third differentiator is that we just have a larger tech and product resource base than our competitors.
-- Blatt

Match Group is in a unique competitive position in that it has a larger user base than its dating app competitors and a more narrowly defined focus than larger social media companies. This gives it both stronger network effects than its dating rivals and a better ability to serve its core match-seeking customers than the social media titans. Moreover, Match Group is investing heavily in advanced technologies such as artificial intelligence and location-based features, which it believes will further differentiate its services from that of its dating product peers.

Our next step for Match is to translate product performance improvements into growing the top of the funnel. TV advertising has traditionally been a great way for us to reach our core audience with our message, but the media landscape is shifting quickly and TV viewership is down, making TV a less efficient channel for us.

That said, we are making progress shifting our customer acquisition efforts to where users are spending their time and reaching them through online videos through deeper storytelling. The ability for us to drive growth at Match, and to what extent, really depends on our ability to effectively crack this marketing transition.
-- Incoming CEO Amanda Ginsberg

Match Group is allocating more of its marketing dollars to Facebook (NASDAQ:FB) and other social-media platforms to reflect the changing viewership habits of its target market. Match is already enjoying a solid return on its Facebook investments, and management says growth will be even more pronounced next year as the full effect of its Facebook ads take hold.

Match Group's operating leverage is helping free cash flow grow at an even faster rate than revenue. The company intends to use its bountiful cash production to pay down its debt, while keeping plenty of dry powder on hand for new acquisitions.

6. More good times are ahead

We expect Q4 revenue of $355 million to $365 million or 22% year-over-year growth at the midpoint, a further acceleration from the 19% Q3 2017 growth rate. We also expect Q4 revenue to be positively impacted by the full quarter impact of the higher Tinder Gold rate, growth in Tinder average PMC, and continued growth in a la carte.
-- Swidler

With Tinder leading the way, Match Group expects its revenue growth to accelerate in the fourth quarter. In turn, the company anticipates that its full-year revenue and adjusted EBITDA will rise 17% to 18% and 19% to 20%, respectively. That's impressive growth for an $8 billion business. And should Match Group be able to deliver this level of performance in the quarters ahead, shareholders are likely to be well rewarded.