How do wings, beer, and roast beef sound?

It's official: Buffalo Wild Wings (BWLD) has agreed to be acquired. And the final bid for the beer, wings, and sports restaurant chain was just a bit tastier than previous reports had indicated.

Buffalo Wild Wings announced on Tuesday that it has entered a merger agreement with Arby's Restaurant Group. Under that agreement, it will be acquired for $157 per share in cash, valuing the deal at roughly $2.9 billion including Buffalo Wild Wings' debt. Arby's is owned by private equity firm and reputable restaurant investor Roark Capital. 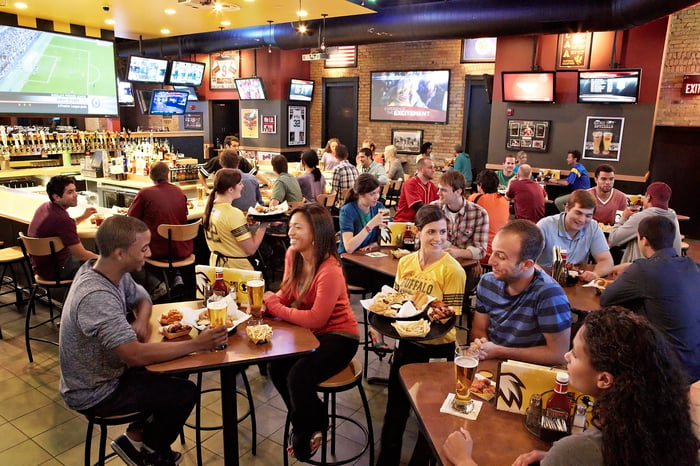 This announcement shouldn't be a big surprise. Buffalo Wild Wings stock skyrocketed two weeks ago following reports that Roark Capital had made an offer for "more than $150 per share." But at $157, the final price -- which represents a 38% premium to Buffalo Wild Wings' unaffected 30-day volume-weighted average -- should partly appease concerns among patient investors who found themselves debating whether $150 was good enough to offset Buffalo Wild Wings' potential for even greater long-term returns.

After all, Buffalo Wild Wings stock also popped last month after cost-savings initiatives helped the company absolutely crush earnings expectations for its third quarter. That left many shareholders excited for the prospect of sustaining that momentum to potentially revisit the stock's all-time high, set at above $200 per share in late 2015.

Alas, the boards of directors of both companies have already unanimously approved the agreement. The deal is also not subject to financing conditions, as Roark Capital has already secured the equity and debt financing required to close the purchase. This leaves it subject to "only" shareholder and regulatory approvals in the coming weeks. That said, regarding the former, funds advised by activist investor Marcato Capital -- which won three seats on Buffalo Wild Wings' board after a contentious proxy fight earlier this year -- have already struck a separate agreement to use their own 6.4% stake to vote in favor of the transaction.

The deal "provides compelling value to our shareholders," said Buffalo Wild Wings CEO Sally Smith. "We are confident that the strength of our two industry-leading brands, under the sponsorship of Roark Capital -- an experienced restaurant and food service investor -- will enable us to capitalize on significant growth opportunities in the years ahead."

If all goes as planned, the transaction should close in the first quarter of 2018. After that, Buffalo Wild Wings will continue to operate as a distinct brand, only as a privately held subsidiary of Arby's Restaurant Group.

So where does that leave you as an investor?

At this point, as evidenced by Buffalo Wild Wings' current share price trading within 0.9% of the agreed acquisition price, there seems to be little standing in the way of its privately held future. So unless waiting to sell would result in more favorable long-term capital gains tax treatment, I think Buffalo Wild Wings investors would be wise to take their profits and put them to work in another promising stock.