Buffalo Wild Wings (NASDAQ:BWLD) hopes that life will be a little less wild going forward, after a protracted tussle with Marcato Capital Management ended with the announcement this week that "B-Dubs" is being acquired by Arby's Restaurant Group for $157 per share. Arby's, the quick-service sandwich chain, is majority-owned by private equity firm Roark Capital Group, which will pay $2.9 billion for Buffalo Wild Wings, including net debt.

Shares gained 6.3% on Tuesday after the deal was announced, and they now sit a couple of points below the deal offer, trading at 31 times forward earnings. The deal price represents a premium of 63% over the multi-year low B-Dubs' stock set just 12 weeks ago when it closed at $96.45 on Sept. 7. While the transaction price is no bargain, Arby's should still be able to generate a decent return on investment in the coming years.

A quick service restaurant (QSR) chain like Arby's acquiring a higher-end, fast-casual restaurant for turnaround purposes isn't typical, but in this case, the combination makes much sense. Several fast-casual chains have experienced crimped sales recently from a number of factors, including a rising "eat at home" trend due to increased grocery home delivery, and millennials' interest in cooking healthy food. Additionally, QSR chains have regained market share over the last two years, led by invigorated competitors like McDonald's Corporation (NYSE:MCD), and The Wendys Co (NASDAQ:WEN). Incidentally, by virtue of a minority stake of 18.75% in Arby's, Wendy's will soon also be an owner of Buffalo Wild Wings.

As a survivor and veteran of the fiercely competitive QSR arena, Arby's has the experience and tools to help Buffalo Wild Wings regain some of its lost traffic -- B-Dubs' company-owned stores are expected to post a comparable store sales drop of 1.5% for the full 2017 year.

QSRs tend to feature more frequent promotions and limited time offers (LTOs) than their fast-casual counterparts. Specifically, Arby's should be able to help Buffalo Wild Wings run more effective promotions, which will speed the transition to a higher percentage of boneless wings in its stores.

Boneless wings are a priority in light of significantly higher wing prices this year -- at $2.16 per pound, the cost of traditional wings in the company's most recent quarter exceeded the comparable prior-year cost by more than 25%.

The company has tried to mitigate wing price volatility (and the associated pressure on margins) by switching out its Tuesday half-price wing promotion for a buy one, get one (BOGO) "Boneless Tuesday" offer in company-owned restaurants. This transition to more profitable boneless wings has hurt traffic but eased some of the pressure on the company's cost of sales.

Arby's will likely tweak this strategy while introducing more menu innovation at Buffalo Wild Wings. It will aim squarely at increasing customer visits while balancing offerings between value LTOs and premium menu items. In other words, Arby's will graft some QSR sales techniques onto Buffalo's business model while being careful not to harm its primary value proposition as a sports-based, wings and beer entertainment venue. 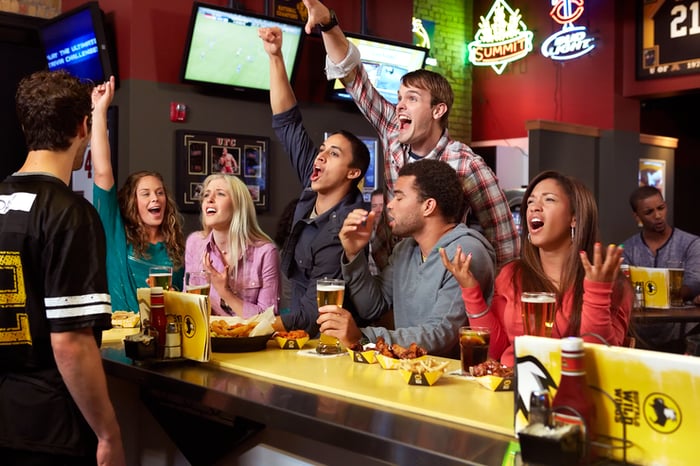 Are these the varied shareholder reactions to the proposed deal? Image source: Buffalo Wild Wings.

Arby's should also be able to boost its return on invested capital by attacking restaurant margin. Restaurant margin is the profit the company generates from its owned locations (versus franchised locations) before the application of selling, general, and administrative expenses. Since peaking in 2014, B-Dubs' restaurant margins have steadily eroded. Take a look at the final row in the table below:

Arby's will find many opportunities to regain a few percentage points of restaurant margin. Labor costs and operating expenses should decrease once run through the best practices of a private equity-backed QSR.

Food inventory may also be ripe for optimization. Currently, Buffalo Wild Wings buys wings each month based off the average wing market price from the preceding month, and when prices exceed an upper contractual threshold or dip below a floor, the difference is split with suppliers. Arby's may be able to renegotiate longer-term, favorable contractual prices while finding creative ways to hedge downside wing price risk.

Moving beyond restaurant efficiencies, Arby's also has top-line and profit opportunities within its base of longstanding and highly capable franchisee groups. It can offer up new Buffalo Wild Wings development opportunities to well-capitalized, experienced partners, thus boosting royalty and fee income. Within the Arby's system, stronger franchisee groups own units in the tens, and even in the hundreds. Depending on existing territory agreements, Arby's management will probably speed the development of the B-Dubs concept after successfully tackling the first item of business -- rejuvenating traffic and turning sales trends positive again.