Please ensure Javascript is enabled for purposes of website accessibility
Log In Help Join The Motley Fool
Free Article Join Over 1 Million Premium Members And Get More In-Depth Stock Guidance and Research
By Harsh Chauhan - Dec 1, 2017 at 11:02AM

Qualcomm and AMD are taking aim at Intel's monopoly in server chips.

Intel (INTC -2.43%) literally owns the market for server chips. Over 99% of data centers run computers powered by Chipzilla's silicon, creating a big entry barrier for any would-be competitor. But this hasn't deterred other chipmakers from trying their hand at server chips in the hope that they can make a dent in a market that's expected to grow at 5% a year until 2020, hitting a projected $20 billion in revenue.

Earlier this year, Advanced Micro Devices (AMD -4.53%) made waves when it claimed that its EPYC server chips can outperform Intel's offerings thanks to superior specs. Qualcomm (QCOM -3.59%) is the latest company to join the bandwagon, claiming that its Centriq line of server processors can do better than Intel at a price point that's way lower. So, should Intel start quaking in its boots? Let's find out. 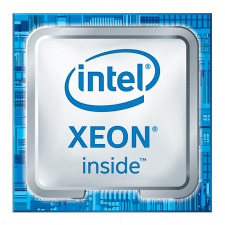 Qualcomm's Centriq server chip is based on the ARM platform, and it is being manufactured using the 10nm fabrication process by Samsung. Qualcomm claims that the Centriq 2400 processor family is the "first high-performance Arm-based processor series designed to offer groundbreaking throughput performance for cloud workloads running in today's datacenters," and it has been designed to deliver "exceptional performance-per-watt and performance-per dollar."

The more important thing to note is that Qualcomm has spent over four years to develop its server processor family with the intention of currying favor with service providers. The good news is that Qualcomm's expertise in making chips and brand equity has helped its new chip family get off the ground.

The chipmaker has managed to get the likes of Alibaba, Alphabet, Hewlett-Packard Enterprise, and Microsoft on board to test the Centriq processors.

Given that Qualcomm has already started commercial shipments of Centriq, these chips will now be evaluated by its partners to see if they can really deliver. It might be a year before we start seeing deployments on a large scale.

But Qualcomm investors have strong reasons to remain upbeat about the future of Centriq as the chips have massively undercut Intel's Xeon server processors in terms of pricing. The most expensive Centriq 2460 processor retails for $1,995, while the most expensive Intel Xeon Platinum processor carries a price of just over $10,000.

One of Qualcomm's benchmark tests indicates that its top-of-the-line Centriq processor can match the performance of the Intel Xeon Platinum in terms of single-thread performance, and at a far lower power consumption rating (120 watts versus Intel's 205 watts). This could be a big advantage for Qualcomm over Intel as servers reportedly account for 30% of a data center's power consumption.

Additionally, Qualcomm's Centriq can outperform Intel's processors in multi-threading workloads as well, according to content delivery provider Cloudflare. If Centriq can replicate such performances in the real world, there's no doubt that they will witness strong demand from hyperscale data centers.

AMD has been making a lot of noise with its EPYC server chips in recent months. After claiming that these chips are better than Intel's Xeon server chips earlier this year, AMD has managed to land a few big-name clients.

For instance, Chinese cloud giants Tencent, JD.com, and Baidu have already deployed EPYC chips in their data centers. Moreover, AMD made another big announcement recently when it revealed that its EPYC processors have helped Hewlett-Packard Enterprise slash costs at one of its servers by as much as 50%.

With this deployment, AMD is now supplying its EPYC processors to two of HPE's servers, indicating that the chipmaker's server business is indeed gaining traction. Additionally, AMD has deployed a smart strategy of undercutting Intel on pricing across its entire chipset range. For instance, the EPYC 7601 processor priced at $4,200 is over $500 cheaper than an Intel Xeon 8160 chip, and also offers more cores, making them ideal to process resource-hungry workloads.

Therefore, it won't be surprising to see more infrastructure providers using AMD's EPYC server chips in their data centers. This sounds like bad news for Intel as both AMD and Qualcomm are trying to hit the former on pricing and trying to match the performance of Chipzilla's offerings as well.

It is still early to see how much damage Qualcomm and AMD can do to Intel in the server space. But Chipzilla investors have a good reason to remain concerned as rivals have now set the wheels in motion, and could hurt its supremacy if they can execute their product development moves with aplomb.