Please ensure Javascript is enabled for purposes of website accessibility
Log In Help Join The Motley Fool
Free Article Join Over 1 Million Premium Members And Get More In-Depth Stock Guidance and Research
By Dan Caplinger - Dec 1, 2017 at 8:29AM

Recent increases have been small. Could this year see bigger gains?

The tobacco industry is well-known for strong dividend growth, and Philip Morris International (PM 0.99%) has done a good job of living up to the legacy that its former parent company started more than half a century ago. Yet being an internationally focused tobacco giant involves some challenges that domestic industry players don't face, and some of those difficulties have hurt Philip Morris' earnings in recent years. That in turn has slowed its dividend growth, but investors hope that the headwinds that Philip Morris has faced could finally be about to turn around.

Let's take a closer look at Philip Morris and whether it's likely to be in a position to deliver a stronger dividend boost in 2018.

Why has Philip Morris' dividend growth slowed over time?

When it first became its own independent publicly traded company, Philip Morris International's dividend policy closely resembled what its domestic counterpart had done throughout its history. Dividends would be a key part of its total-return proposition, and after establishing a solid initial payout, Philip Morris typically gave its investors several dividend increases of between 10% and 20% for years following its IPO. 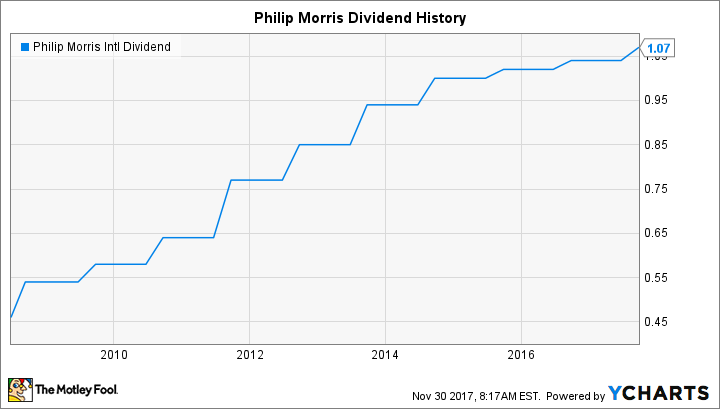 Growth rates started to slow in the mid-2010s. The primary culprit was the foreign exchange market, because the falling value of several major currencies in relation to the U.S. dollar meant that Philip Morris International's revenue and profits from those foreign countries didn't translate into as many dollars on its financial statements. Slowing bottom-line growth prompted Philip Morris to reduce the size of its 2014 dividend hike to 6%, and two straight years of 2% rises in 2015 and 2016 showed just how long the company suffered through a strong-dollar period.

In 2017, investors got a small sign of hope when Philip Morris gave them a 3% dividend boost. Even so, earnings throughout the year have still reflected both currency headwinds and some other pressures stemming from the general secular decline in cigarette smoking worldwide. Increased regulatory threats from several key countries have also weighed on Philip Morris' prospects for long-term growth.

Philip Morris has made it clear that it believes reduced-risk products will define its future, and the success of the iQOS heated-tobacco system in Japan gives a hint as to just how lucrative that future could become. It will take a long time for Philip Morris to make a full transition away from traditional cigarettes, and it's unclear what the pathway for revenue and earnings will look like during that transitional phase.

For the immediate future, Philip Morris is likely to keep making dividend increases, but they're probably going to remain small. Even with the minimal boosts it has made in recent years, the company still has a 95% payout ratio, leaving precious little room for future hikes. Investors have high hopes that double-digit earnings growth in 2018 could free up some room for a bigger dividend hike, but previous hopes along those lines haven't panned out.

Philip Morris shareholders can expect the dividend to go up in late 2018, likely in the same September time frame that it has used throughout its history. But absent a big acceleration in the company's success, Philip Morris will probably choose a round figure like $1.10 per share for its next new dividend, representing another somewhat disappointing 3% growth rate and showing just how difficult the global tobacco industry environment has been.