There's something very interesting going on in the stock market right now. While shares of banks and other large-cap stocks are climbing on hopes that Congress will cut the corporate income tax rate from 35% to 20%, which is in the bill passed by the Senate last Friday, shares of technology companies are dropping.

Over the past week, shares of Facebook, Amazon.com, and Alphabet have dropped more than 4%. The S&P 500 is up 1.7% over the same time, with bank stocks leading the way. Shares of Bank of America (NYSE:BAC) and JPMorgan Chase (NYSE:JPM) are doing especially well, up more than 9% each since the beginning of last week. 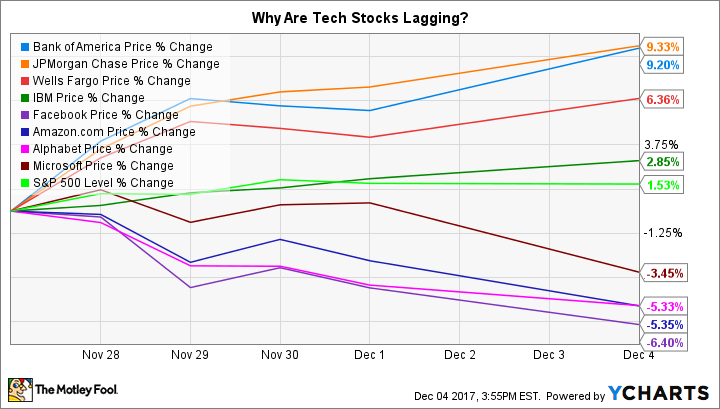 Why the divergence? It's a good question that investors should ponder.

On the one hand, it makes sense that bank stocks are up. If you look at the S&P 500, three out of the four companies on the large-cap index that pay the most in taxes are banks. JPMorgan Chase led the way over the past 12 months, setting aside $9 billion, followed by Wells Fargo (NYSE:WFC) at $8.7 billion, and Bank of America at $8.5 billion.

The only company to pay more in taxes over the past year was Apple (NASDAQ:AAPL). Thanks to the incredible success of Apple's iPhone franchise, it had to pay $15.7 billion in taxes, according to data from YCharts.com. These three banks, in particular, pay a lot in taxes because they're among the biggest and most profitable companies in the United States. For its part, JPMorgan Chase's balance sheet weighs in at $2.6 trillion. No other U.S. company comes even close. That includes Apple, which has $375 billion in assets on its balance sheet.

But it's not as if technology companies aside from Apple don't pay a lot in taxes, too. Alphabet, Google's parent company, ranks 11th on the S&P 500. Its tax bill over the past year adds up to $5 billion. Facebook is a bit further down, at $2.4 billion. And Amazon.com is at $1.2 billion.

Given this, why aren't shares of these companies also rallying on the prospective corporate tax cut? One explanation is that they may be serving as a canary in the coal mine. Recently, the head of JPMorgan Chase's investment bank warned that the market could be in for a sharp correction in the near future. If that were to happen, it would make sense that tech stocks would lead the way down, as they tend to have higher valuations than other types of stocks.

This would also be consistent with the warnings from a number of other respected investors this year who have sounded an alarm about the current state of the market. For context, large-cap stocks are trading at their third-highest valuation in history, behind only 1929 and 1999. Here's what Howard Marks, the co-chairman of Oaktree Capital Group and one of the most respected distressed debt investors in the country, wrote in a memo to clients earlier this year:

[I]t's essential to take note when sentiment (and thus market behavior) crosses into too-bullish territory, even though we know rising trends may well roll on for some time, and thus that such warnings are often premature. I think it's better to turn cautious too soon (and thus perhaps underperform for a while) rather than too late, after the downslide has begun, making it hard to trim risk, achieve exits and cut losses.

Since I'm convinced "they" are at it again -- engaging in willing risk-taking, funding risky deals and creating risky market conditions -- it's time for yet another cautionary memo. Too soon? I hope so; we'd rather make money for our clients in the next year or two than see the kind of bust that gives rise to bargains. (We all want there to be bargains, but no one's eager to endure the price declines that create them.) Since we never know when risky behavior will bring on a market correction, I'm going to issue a warning today rather than wait until one is upon us.

Sharing these concerns is Jeffrey Gundlach, co-founder and CEO of DoubleLine Capital, a hedge fund with $110 billion in assets under management:

If you're waiting for the catalyst to show itself, you're going to be selling at a lower price. This is not the time period where you say, 'I can buy anything and not worry about the risk of it.' The time to do that was 18 months ago.

Is the recent decline in tech stocks like Facebook, Alphabet, and Amazon an early sign that these warnings are beginning to come to fruition? It's too early to say either way, but it's certainly something that investors should keep in the back of their minds right now.