When it comes to making money from the skies, airline stocks may be the obvious play. But those who are willing to go a little deeper might find more value in aircraft lessors, companies that make their money leasing planes to the airlines that operate them.

Shares of one aircraft leasing business, AerCap Holdings N.V. (NYSE:AER), trade at a discount to book value and a single-digit multiple of earnings, a rare bargain in a world where the S&P 500 trades at about 25 times earnings.

Here's why I think AerCap is one of the best bets on the market today.

Given that the prototypical Boeing (NYSE:BA) 787-9 Dreamliner can cost as much as $270 million, many airlines choose to lease some or all of their fleet rather than pay for jets outright. AerCap foots the bill for the plane, and then signs a long-term lease with an airline that puts it into service. 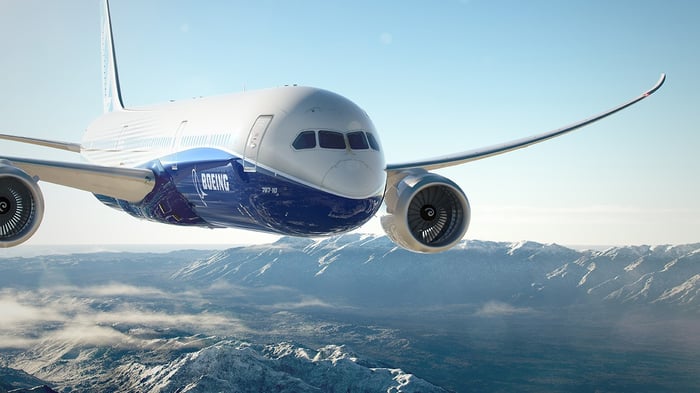 To this end, aircraft lessors are to airlines what REITs are to retailers and restaurants. They act as the "bankers" that turn large capital investments into digestible monthly payments. Just as a good restaurant can lease property from a REIT to focus on what it does best (making food), aircraft lessors allow airlines to focus on the business of moving people from A to B.

New aircraft are initially leased for 10 to 15 years. After that, they can be released or extended for several more years. Late in their lives, jets are sold as cargo planes (your Amazon packages don't care what a plane looks like), or simply scrapped for their parts and metal content.

When leases are adequately priced, aircraft lessors earn recurring income on each leased plane, plus a one-time gain when the plane is sold or scrapped.

AerCap is the second-largest aircraft lessor after General Electric's GE Capital Aviation Services, which begets substantial economies of scale. It's the only independent aircraft lessor with investment-grade credit ratings from all three major credit rating agencies, which enables it to finance its fleet less expensively than competing lessors and operators. (The company recently issued a eight-year bond with a 3.5% coupon, evidence of its financial strength and low leverage profile.)

In a commodity business, management is everything. And it's my view that AerCap has the best management team in the business because they think like owners, allocating capital to generate the best returns.

AerCap doesn't grow for growth's sake. Its last major growth spree was in 2014, when it acquired a fleet from AIG at a fraction of book value. More recently, management has bought back stock at a discount rather than acquire more planes at full price. It's a smart move, since the company sold planes at a premium to buy back stock at a discount to book value. In the last seven quarters, AerCap's aggressive repurchases reduced share count by approximately 21%.

I trust management to operate the business for the benefit of shareholders because managers are large shareholders themselves. Its CEO, Aengus Kelly, owns more than 2.2 million shares of the company, valued at about $116 million. In 2016, all AerCap executives, including Kelly, took home a combined $8.3 million in compensation. The interests of shareholders and management are very well aligned.

AerCap shares trade for about 0.95 times book value, and it's my view that book value is more likely to be understated than overstated. While book value for any financial company is inherently imperfect, AerCap has historically realized gains when it sells or scraps a plane. For full-year 2017, the company expects to earn $6.20 per share, with $1.15 coming from gains on the sale of aircraft in its fleet, according to a recent presentation.

Consistent and repeating gains on the sale of aircraft are evidence of conservative accounting and smart capital allocation, akin to prior-year favorable developments that the best insurance companies report with regularity.

At roughly $52 per share, AerCap trades for less than 10 times recurring earnings estimates in 2018 and a modest single-digit discount to book value. That's quite a bargain for a company that could realistically earn double-digit returns on equity over a full economic cycle, and generate excess returns by opportunistically buying back stock at deep discounts to book.

I believe shares could be worth as much as 13 times "core" earnings, which excludes gains on the sale of planes. That would value the company at as much as $70 per share, or about 35% higher than where they trade right now.

Please make sure your seat back and folding trays are in their full upright position. AerCap is ready for flight.