Chicago is the third largest city in the U.S., and it has one of the most diverse business climates that you'll find in an American metropolitan area. From its roots as a hub of agriculture and transportation, Chicago has grown into a true giant of industry, attracting businesses of all kinds. For those who don't find either coast attractive, the city is a natural place to set up shop.

Chicago serves as a key center of commerce for hundreds of miles in all directions, and its international renown makes it a popular place for tourists and global business leaders alike. Below, we'll look more closely at some of the biggest companies that call Chicago home and what prospects they have to continue to grow. 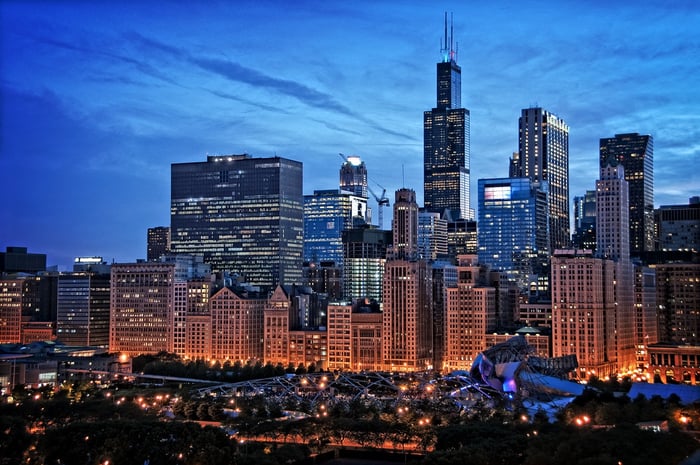 Many of the businesses located in Chicago owe their initial success to agriculture. Archer-Daniels-Midland is the company most directly connected to agriculture, buying and transporting crops from farms across the world and transforming them into a wide variety of different products. In addition to producing food for both human and animal consumption, ADM has evolved into a major producer of the ethanol that gets mixed into gasoline, making it a key player in the energy market. The ag giant also makes a range of chemicals for industrial use, including ingredients that go into popular personal-care products as well as water-repellant vegetable oils for use as wood coatings.

Other businesses have evolved well beyond agriculture to serve a broader purpose. For CME Group, the name of the company points to its origin as the Chicago Mercantile Exchange, which was one of the first commodities exchanges. Originally set up to trade butter and eggs, the CME now offers futures and options on a wide variety of agricultural and other commodities as well as financial instruments and even cryptocurrencies. Even now, the CME features corn and soybean futures among its top featured products.

Northern Trust has undergone a similar evolution. Founded in the late 19th century, Northern Trust initially served the local citizens of the region, many of whom owed their wealth to agrarian businesses. Yet the bank took advantage of the 1893 World's Fair to go beyond its local roots, serving the international customers who visited the event. Expansion into the underwriting of municipal bonds helped give Northern Trust more diversification, and today, the company has a strong reputation for providing wealth and asset management services to individual and institutional clients across the globe.

It would be a mistake to dismiss Chicago as having only agricultural businesses. With a wealth of resources and talent, the Windy City has spawned plenty of businesses in different industries and attracted its fair share of newcomers from the outside.

Exelon, for instance, has become one of the most important energy providers in the nation, operating a fleet of nuclear power plants to drive its network of power generation, transmission, and delivery assets. The company's Commonwealth Edison unit has historically provided primary electric power to the Chicagoland area. As a key player in competitive energy distribution, Exelon now provides power across North America, and investors benefit from having both regulated utility exposure along with the growth potential that its competitive assets give the power company.

Finally, the biggest company on the list is a relative newcomer to the region. Boeing came to prominence in the Pacific Northwest, but the aerospace giant chose to move its corporate headquarters from Seattle to Chicago in 2001. The city and the state of Illinois offered extensive incentives to Boeing to do so, including state tax and other incentives along with municipal property tax abatements. For its part, Boeing said that having its headquarters separate from its production facilities, which largely remained in the Seattle area, would help the company grow more robustly. Few investors can complain about the results.

The city on the shore

Chicago has a feel unlike any other city, and that flavor shows up not just in the people who call it home, but also in the businesses that choose to operate there. Keep your eye on these five companies, because they all have the potential to keep building on a strong foundation of growth and prosperity in the future.