Shares of Southern California utility Edison International (EIX 0.79%) plunged as much as 13.3% in trading Tuesday after a brush fire began to spread in the company's territory. At 3:20 p.m. EST shares were still down 12.8% on the day.

A wildfire wouldn't normally be a problem for a utility, but in California, utilities can be held liable for property damage if they are determined to have caused the fire. The cause of this fire is uncertain, but it falls squarely in Edison International's territory, so there could be a cost for the company. 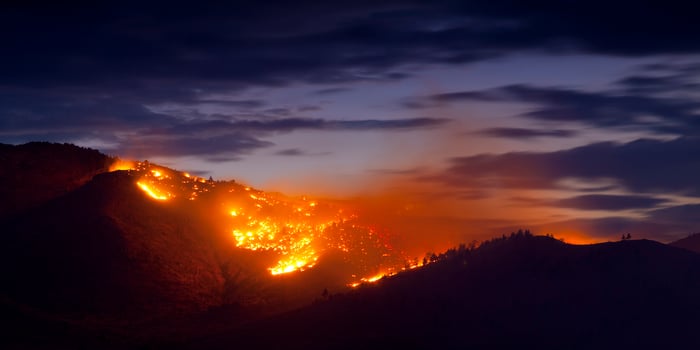 It's purely speculation that Edison International will end up with a big bill out of this fire, but it's possible. And that possibility alone was enough to send shares lower today.

I'm hesitant to view this dip as a great buying opportunity until we know more. Neighboring utility Pacific Gas & Electric is dealing with similar speculation that fires in Northern California were caused by its equipment, so the pressure may not go away soon. For investors, the fires and what caused them are worth watching; at this point, this could be a risk that's entirely out of Edison International's hands.

Why Shares of Edison International Are Falling Today
356%