Please ensure Javascript is enabled for purposes of website accessibility
Log In Help Join The Motley Fool
Free Article Join Over 1 Million Premium Members And Get More In-Depth Stock Guidance and Research
By Jeremy Bowman - Dec 6, 2017 at 8:32AM

Find out why this Mexican beer specialist still has more room to run.

Sin stocks, such as cigarette makers, alcoholic beverage brewers, and casino operators, have historically outperformed the market. Tobacco and alcohol companies, in particular, have thrived not just by selling products that are both mind-altering and addictive, but by creating high-profit-margin brands with which consumers develop strong relationships. Popular liquor brands like Jack Daniel's whiskey, Smirnoff vodka, or Jose Cuervo tequila, have been staples on bar shelves for generations.

While alcohol is a product with no real substitute, shifting consumer tastes have rocked the industry in recent years, leading to a surge of merger activity, and creating new winners and losers.

The rapidly growing popularity of craft beer -- defined as those beers made by independent brewers that produce 6 million barrels or less a year -- has siphoned market share away from macrobrews like Budweiser, and led to industry giants like Anheuser Busch/InBev (BUD 1.18%) buying up scores of microbreweries, including Wicked Weed Brewing, Karbach Brewing Co., among others. By volume, craft beer sales increased 6.2% last year, though that clip is down from the double-digit percentage growth of previous years. Meanwhile, overall beer sales were flat last year.

Sales of Mexican imports like Corona and Modelo, which are distributed in the U.S. by Constellation Brands (STZ 0.20%), are also growing, thanks to the country's expanding Hispanic population, wider distribution, and savvy marketing campaigns.

In liquor, whiskey has surged in popularity and availability: U.S. bourbon production has jumped by 150% over the last decade, and the number of craft distilleries has quintupled. The premium cocktail trend and an explosion of high-end cocktail bars have helped spark a resurgence of whiskey-based drinks and other creative beverages engineered by mixologists and bartenders. Some observers have also credited TV shows like Mad Men for the cultural shift. That growth has driven increasing sales and profits at Brown-Forman (BF.A 0.49%) (BF.B 0.28%), which owns Jack Daniel's, as well as bourbon brands like Woodford Reserve and Old Forrester. 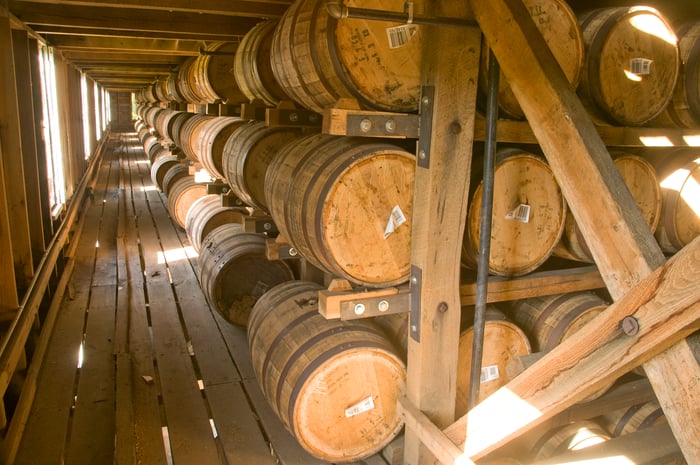 Domestic liquor sales grew 2.6% last year, with the growing popularity of bourbon driving much of that growth. Wine sales, meanwhile, were up 1%. Since the wine market is highly fragmented, with hundreds of brands and different vintages, as well as quality that can fluctuate marked from year to year, the wine industry tends to be of less interest to investors.

Below is a chart showing five of the best-known alcohol stocks.

As the table above shows, Constellation Brands is the clear winner both in year-to-date gains and over the last five years, during which it has crushed other alcohol stocks and the S&P 500. Brown-Forman is the second-best performer over both time frames; the other three have lagged the broader market over the last five years. Sam Adams-brewer Boston Beer has fallen significantly over the last three years as smaller craft brews have chipped away at its market share.

Constellation Brands' runaway success can be traced primarily to a single event that happened five years ago. The company acquired the remaining 50% of Crown Imports that it didn't own from Grupo Modelo) (AB/InBev was forced to divest that stake when it bought Grupo Modelo.)  The $1.8 billion purchase gave Constellation the exclusive right to distribute Grupo Modelo brands such as Corona, Modelo Especial, Pacifico, Negro Modelo, and Victoria in the U.S. Since then, Constellation has expanded its capacity by 10 million to 25 million hectaliters -- a number which will rise further when its new Mexicali megabrewery begins producing.

Thanks to that acquisition, revenue jumped 74% in fiscal 2014, and EPS has more than tripled over the last four years.

Growth has been slower at Brown-Forman, Diageo, and AB/InBev, which have all seen revenue tick up in the single-digit percentages in recent quarters, though AB/InBev has capitalized on its recent acquisition of SAB Miller. Since global alcohol sales volumes are relatively flat, investors should have modest expectations for growth from the industry. That lack of volume growth explains why there have been so many acquisitions recently, as well as a race to premiumization in craft beers and high-end liquors as consumers have developed more refined tastes.

Boston Beer, meanwhile, has struggled. Revenue declined 4.5% through the first three quarters as increasing competition from craft brewers has left Sam Adams in a squeeze between high-end microbrews and macro brands from the likes of Anheuser Busch and Molson Coors.

For investors looking to get a piece of the alcohol sector, Constellation Brands continues to look like the best choice. While I wouldn't expect another 500% surge over the next five years, the company consistently beats earnings estimates, and is adjusting its portfolio to position itself for continued growth. It acquired craft brewer Ballast Point in December 2015, and made a strategic investment in Canopy Growth Corp. (WEED -3.54%), a leading cannabis company based in Canada.  Constellation took a 9.9% stake in Canopy for about $200 million, and has the option to purchase an additional ownership interest. With Canada set to legalize recreational marijuana and an increasing number of U.S. states also doing so, the Corona importer is in a strong position to take advantage of the so-called green rush.

Cannabis seems like a natural extension for Constellation as the company has expertise with drug-related regulations, as well as the marketing and distribution expertise that would be necessary if legal marijuana becomes as big a business as investors hope. CEO Rob Sands said he thinks it's "highly likely" that pot will eventually be legalized in the U.S., though he said the company would not produce any cannabis products until it was legal at all levels. Sands also said Constellation would work with Canopy to develop cannabis-infused beverages.

Boston Beer, on the other hand, is a stock better off avoided. Though share prices have spiked about 40% since this summer on a better-than-expected second-quarter earnings report and speculation about a buyout, the stock is still down nearly 30% over the last three years. Revenue continues to decline, and at a forward P/E of 28.6, shares look pricey.

Constellation Brands, on the other hand, trades at a forward P/E of 23.3. Considering that the other companies listed above are valued similarly but growing more slowly, and Constellation looks well positioned for the future, I think the Corona importer is the best alcohol stock to buy today.