Please ensure Javascript is enabled for purposes of website accessibility
Log In Help Join The Motley Fool
Free Article Join Over 1 Million Premium Members And Get More In-Depth Stock Guidance and Research
By Tyler Crowe - Dec 7, 2017 at 10:15AM

The company's stock may have taken a hit after fourth-quarter earnings, but it's not entirely clear why.

Based on Wall Street's response to Toll Brothers' (TOL 1.11%) most recent earnings report, it would seem that this past quarter wasn't that great. Digging into the overall results, though, it's not entirely clear what the Street didn't like. Like many of its peers, the luxury homebuilder posted robust year-over-year growth and is starting to show some payoff for its endeavors into new housing territory: apartments and high-rises.

Here's a brief rundown of Toll Brothers' latest earnings report as well as what management sees in this new market for homebuilding. 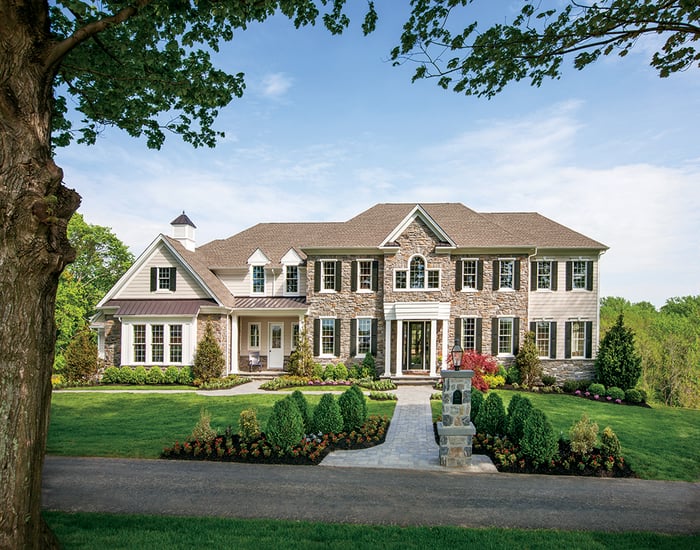 You'll be hard-pressed to find anything discouraging in Toll Brother's earnings report. The company delivered good or improving income statement results and operating metrics. Total new order contracts? Up 15% in units or 20% in dollar results as the average home price increased. Total backlog? Up 24% to $5.81 billion. Gross margin and SG&A expenses? The adjusted gross margin was a healthy 25.3% and SG&A costs were only 8.3% of revenue, which puts Toll Brothers at the low end of its peers.

The one thing that investors might nitpick is that the average selling price wasn't quite as high as originally anticipated -- hence the slight earnings estimate miss. Management forecasts that it will deliver 7,700 to 8,700 new homes in 2018. In 2017, the company signed 8,175 contracts, which assumes that new order rates for the upcoming year aren't going to grow much. That's in contrast to some of management's comments on the state of the housing market, but keep in mind that not all contracts lead to sales -- the fourth quarter's  cancellation rate was 7.9% -- and it's possible that it's being conservative with this estimate.

This quarter, the company also made some significant financial changes for the better. Management redeemed $287 million in convertible notes that would have added 5.9 million shares to the overall count, redeemed another $400 million in notes, and repurchased about $200 million in shares. This quarter's share repurchases brought the total shares repurchased in 2017 up to $290 million. This shareholder-friendly move is on top of the $0.08-per-share dividend it reinstated back in April. 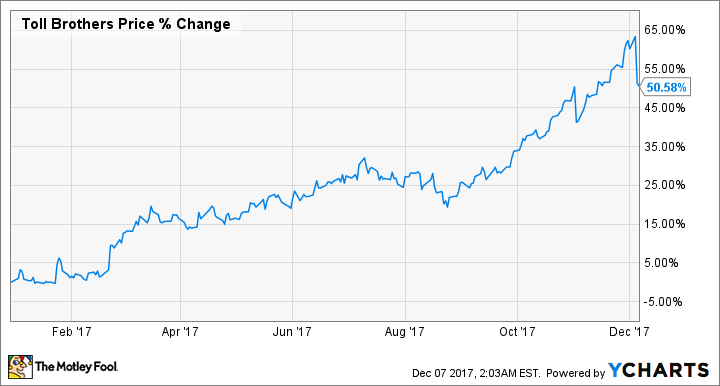 Toll Brothers is carving out a unique niche compared to many of its homebuilding peers lately. Rather than focusing almost exclusively on single family homes, it's branching out into larger developments in urban areas including apartment buildings and high-rise buildings. While the results from these investments have yet to significantly move the needle for the company, CEO Doug Yearley specifically pointed out the progress it has made with these initiatives.

Our Apartment Living rental business continues to expand across the nation. In addition to our well-established divisions focused on urban and suburban markets in the corridor from metro Washington, D.C. to Boston, we now have teams focused on growth in Los Angeles, San Francisco, San Diego, Phoenix, Dallas and Atlanta and a pipeline totaling over 14,000 units of completed projects, those in construction, under development or in approvals.  We have begun to harvest some of the value created under Apartment Living.  In FY 2017, we monetized a small portion of the value in two recently developed, now-stabilized properties through a recapitalization, resulting in income of $26.7 million. In FY 2018 and beyond, we expect to continue to grow the income from this business.

Our City Living high-rise division remains active with its primary focus still on the New York City area, including Manhattan, Brooklyn, Hoboken and Jersey City.  In FY 2017, we formed separate joint ventures to develop two new Manhattan high-rise towers with projected costs totaling over $600 million. By forming these joint ventures, we will lower our investment, increase our return on equity, reduce our risk and benefit from attractive construction financing. As of today, we already have 64 contracts and an additional 12 deposits at these two projects.

In the few numbers available for these efforts, it's pretty easy to see why management is keen to get into this market. The average price per unit in the City Living segment's backlog is $1.4 million compared to $849,400 in its traditional homebuilding business. While the capital commitments for high-rises is much more significant than for a single-family home, the rates of return can be incredible.

Just about every homebuilder in America is benefiting from the tailwinds of a multiyear lull in housing starts post-recession. Not only are backlogs and new orders growing for just about everyone, the average selling price is also increasing, which suggests that there is a low inventory of available housing.

What makes Toll Brothers unique -- aside from its focus on luxury homes -- is that it is the only homebuilder moving directly into urban areas with its apartments and high-rises. It is a higher-risk endeavor with the capital commitments associated with high-rises, but it could prove to be incredibly lucrative if the trend toward urban living persists.