Please ensure Javascript is enabled for purposes of website accessibility
Log In Help Join The Motley Fool
Free Article Join Over 1 Million Premium Members And Get More In-Depth Stock Guidance and Research
By Timothy Green, Steve Symington, and Leo Sun - Dec 10, 2017 at 8:25AM

Consider jumping into these stocks before the end of the year.

Tech stocks have had a great year. The Nasdaq 100 index is up around 30% year to date, and many high-flying tech stocks are up even more. In this final month, and with prices so high, is there anything left to buy? Three of our Foolish investors think so.

Here's why those looking for a tech stock to buy in December should consider Tencent Holdings (TCEHY -3.69%), Cypress Semiconductor (CY) and GoPro (GPRO -2.72%). 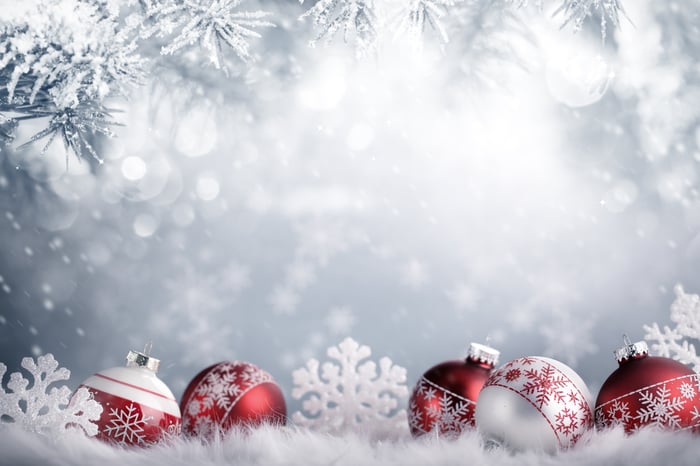 Steve Symington (Tencent Holdings): Arguably no tech trends are as promising for early investors as social media and online gaming right now. With monthly active users for its WeChat platform (called Weixin in China) climbing 16% year over year to a whopping 980 million at the end of last quarter, Tencent Holdings is one of the best ways to profit from both.

The Chinese tech giant saw revenue climb an incredible 61.5% year over year last quarter, to $9.825 billion, which translated to 47% growth in adjusted earnings to $2.572 billion, or $0.27 per share. These results absolutely crushed Wall Street's expectations.

The broad momentum of Tencent's underlying business is even more impressive. Top-line growth included a 48% increase from online advertising, to $1.66 billion, and a 51% jump in value-added services revenue, to $6.35 billion. Within the latter, online games revenue skyrocketed 48%, thanks to hit titles like League of Legends and Clash of Clans. Social networks revenue climbed 56%, thanks to the rollouts of new features like live broadcasting, subscription video on-demand, and virtual item sales. Tencent also enjoyed the momentum of its new cloud and payment services, where revenue popped more than 140% to $1.82 billion last quarter.

If that wasn't enough, Tencent has diversified in recent years by investing significant (minority) stakes in other up-and-coming businesses, including Tesla, Snap, Activision Blizzard, and many others.

And while Tencent doesn't look cheap at first glance trading at around 75 times trailing-12-month earnings, it's much more reasonable looking forward at under 36 times this year's estimates. Shares have also pulled back nearly 17% from their 52-week high in recent weeks, though they've still almost doubled year to date. In the end, I think the stock should continue to beat the market for investors willing to buy now and bet on Tencent's continued meteoric rise.

Leo Sun (Cypress Semiconductor): Cypress Semiconductor sells a wide range of analog and memory chips for the automotive, industrial, home automation, medical devices, and consumer electronics markets. It frequently expands through acquisitions, which include its purchase of embedded chipmaker Spansion in 2015 and Broadcom's Internet of Things business last year.

Cypress' business has been booming, thanks to robust sales of its IoT chips, the growth of the connected car market (which uses its chips in crash avoidance and infotainment systems), rising demand for its USB-C chips, and a global shortage of memory chips. That's why analysts expect its revenue and earnings to rise 20% and 76%, respectively, this year.

Its stock rallied more than 30% over the past year, but still trades at just 13 times next year's earnings. It also pays an attractive forward yield of 2.8%, which used up just 61% of its free cash flow over the past 12 months.

However, Wall Street still expects Cypress to report 7% sales growth and 38% earnings growth next year, and the chipmaker will likely acquire additional companies to keep growing. Therefore, investors who buy Cypress today could be well rewarded over the next few quarters.

Tim Green (GoPro): Shares of action camera leader GoPro have been mercilessly beaten down since peaking back in late 2014. The stock has lost more than 90% of its value, driven by dramatic revenue declines and a shift from profits to losses. Missteps like its Karma drone, which had to be recalled soon after launch last year, certainly didn't help.

GoPro returned to revenue growth this year, and it expects a solid fourth quarter featuring GAAP and non-GAAP profits. Costs have been slashed, with operating expenses through the first nine months of the year down more than 30%. The company expects to produce full-year revenue of $1.315 billion, well above the current market capitalization of about $1.17 billion.

Investing in GoPro is a bet that the company's turnaround is for real. 2018 will be the real test, and the company will need to prove that it can produce a meaningful profit after two years to losses. New products like the Fusion 360 camera should help the cause, but the jury is still out on whether it will be a big seller. The bar is pretty low for GoPro, so if the company can exceed expectations, the stock could be in for a nice recovery.