Ten years ago, Apple decided to use Corning Incorporated's (NYSE:GLW) Gorilla Glass for the original iPhone. Since its first use on the iPhone, Corning's scientists continued to work on the material and released new versions of the glass about once every two years. Each generation of Gorilla Glass was tougher and more flexible than the previous generation, being able to withstand higher drops and more scratches.

Incredibly, the tough, lightweight, and scratch-resistant material has since been used to cover more than five billion devices by 40 different manufacturers.

Now on its fifth generation (GG5), the specialty glass is beginning to show a material impact on Corning's top and bottom lines. The company's third-quarter core sales grew to $2.7 billion, a 6% year-over-year increase which translates to a slight increase in core earnings per share, to $0.43. Corning's specialty materials division, the division responsible for Gorilla Glass, saw much stronger growth and helped buoy the company's overall results. Net sales in specialty materials grew a much more robust 26% to $373 million, while the division's earnings rose an even more incredible 61% to $71 million.

This is still only a small part of Corning's overall business, but its fast growth, high margins, and future possibilities are making it increasingly important to the company's prospects. 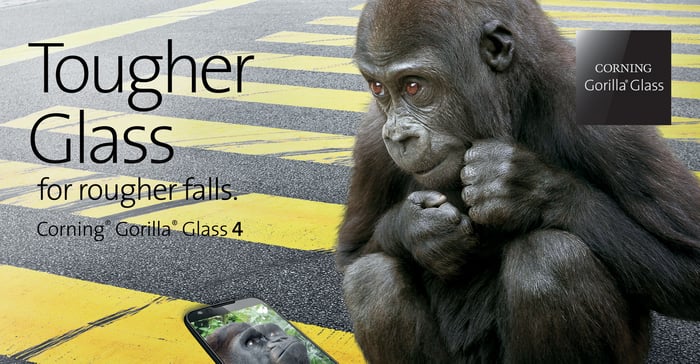 Corning CEO Wendell Weeks firmly believes the success of GG5 can be directly attributed to its performance ratings when compared to competitors' products. During the company's third-quarter conference call, according to S&P Global Market Intelligence, he stated:

Our mobile consumer electronics platform ... reached an important milestone this year: the 10th anniversary of Corning Gorilla Glass. Over the decade, we innovated to make Gorilla thinner, tougher, and more damage-resistant than ever, with Gorilla Glass 5 showing dramatically improved drop performance over alternatives. We've developed specialized processes to reduce glare, improve the aesthetics, and enhance scratch resistance. Today, Gorilla Glass is seeing broader adoption than ever before. Over the past few months, leading smartphone manufacturers adopted our glass on their new devices. Advanced glass offers several benefits over other materials like metal or plastic. Along with improved wireless charging, advanced glass on the back also enables improved reception. It allows for new levels of design and customization.

The product's superior performance has led to its adoption among leading consumer-electronics manufacturers. It's important to point out that this wasn't a one-quarter spike in Gorilla Glass sales; a popular smartphone brand didn't just come in and make a huge order. In the first nine months of 2017 sales increased 28% more than the first nine months in 2016, and management doesn't see that growth slowing down anytime soon. Weeks said the company expects its sales in mobile consumer electronics to double "over the next several years." Perhaps best of all is that the segment's margins are above the company's average, meaning that as Gorilla Glass sales grow, Corning's margins will as well.

Many low-hanging bananas left on the tree for this Gorilla

While Gorilla Glass 5 sales have exploded since it's being used by virtually all major smartphone manufacturers, Corning is selling Gorilla Glass for other uses as well. During the conference call, Weeks rattled off a long list of wearables now using Gorilla Glass SR+, an version specifically built for wearables. Notable product-design wins included Acer Inc.'s Leap Ware and Wal-Mart Stores' Blackweb screen protectors.

Maybe even more exciting is the possible future Gorilla Glass has in automobiles. Weeks announced Corning was making progress on this front on 25 different auto platforms: "On the exteriors of cars, Gorilla Glass laminates are lighter and tougher than conventional auto glass, plus its superior optical quality allows larger, clearer head-up displays. For interiors, Gorilla Glass makes cars more connected and durable with sophisticated capabilities you come to expect from your smartphones."

Corning has many opportunities for future growth. It is the world's lowest-cost producer of optical fiber, giving it a huge moat in a fast-growing sector. Corning's new Valor Glass, made specifically for holding costly drugs for the pharmaceutical industry, could eventually bring in $4 billion in additional revenue for the company. But Gorilla Glass, with all of its potential uses in the exploding consumer-electronics category and the auto industry, might represent the company's best source of growth in the years ahead. Corning is already up more than 31% year to date, crushing the market's 18% return over the same time. But with the company expecting Gorilla Glass sales to double over the next few years, investors can probably expect these market-beating returns to continue for years to come.