We're getting down to the wire now, with only a few short weeks until the close of 2017. It was a year nearly full to the brim with dividend raises, so income investors will be sorry to see it go.

It's not leaving without a goodbye party, though. Last week saw a fresh batch of increases, some from quite well-known companies. Among the notable lifters were Johnson Controls International (NYSE:JCI), Mastercard (NYSE:MA), and Stryker (NYSE:SYK). 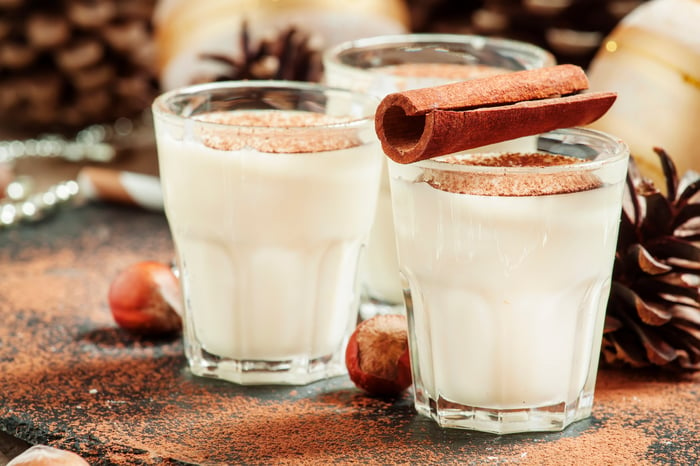 HVAC specialist Johnson Controls is adding only a splash of cash to its dividend. The company will lift its quarterly distribution by 4% to $0.26 per share. It's also raising its existing share buyback program by $1 billion.

Johnson Controls is a longtime and regular dividend payer, stretching as far back as 1887. Its 2016 merger with Tyco International, and subsequent spinoff of the merged entity's Adient automotive business, resulted in a headline loss of $927 million for fiscal 2016. Following that, it cut its dividend by 14%.

That sounds scary, but by stripping Adiant and other one-time items out of the equation, Johnson Controls actually booked an adjusted net profit of $2.17 billion for the year, which was surpassed by 13% in fiscal 2017 (at $2.46 billion). The company attributed this partially to cost-cutting measures. Sales across that stretch of time grew modestly, by 2% to $30.14 billion.

Analysts are projecting 12% annual bottom-line growth on average over the next half-decade. That's good news, but thanks to heavy capital expenditures, the company is deeply cash flow negative on a trailing-12-month basis. Although the dividend raise is modest, the new stock repurchase authorization will put more strain on free cash flow. That's cause for concern, and investors should be careful here. 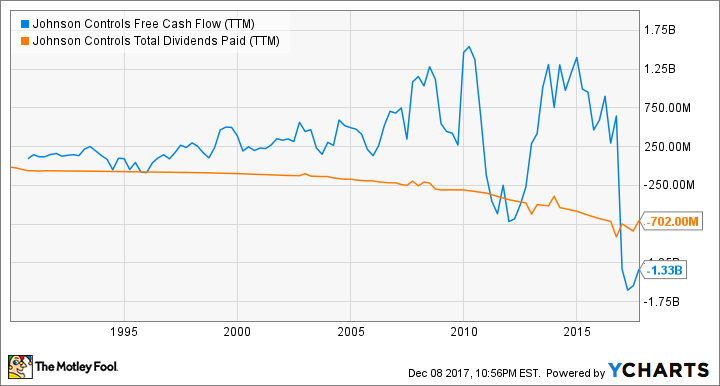 Johnson Controls' upcoming dividend will be handed out on Jan. 12 to stockholders of record as of Dec. 18. Its payout ratio is 30% on the company's Q4 adjusted net profit, and would yield 2.8% on the most recent closing share price. The latter figure is well above the current 1.8% average yield of dividend-paying stocks on the S&P 500.

The company's stock repurchase program supplants an existing initiative that has roughly $200 million remaining under authorization.

One of the world's masters of the payment card sector, Mastercard, has declared a 14% increase in its quarterly payout to $0.25 per share. It will also launch a $4 billion share buyback program at some point in the near future.

Mastercard has every reason to be more generous. A global economy that's growing at encouraging rates, plus a shift in consumer habit from cash to card payments, is really juicing results. Mastercard recently booked its highest-ever Q3 net revenue figure, which at $3.4 billion represented a hefty year-over-year increase of 18%. Net profit also notched an all-time Q3 record, coming in 21% higher at $1.4 billion.

On the slightly less positive side, expenses grew by 20% due to heavy investments in payment technology and security. That's a case of making hay while the sun shines; if properly implemented, such investments can give Mastercard a nice, sharp edge against rivals going forward.

The company's operating and free cash flows are following its general trajectory higher, allowing it enough room to essentially renew its existing stock repurchase initiative. As I've complained before, Mastercard and other card giants very much favor this way of spending their free cash and devote relatively little to their dividends.

Nevertheless, FCF in the latest quarter was way up, providing more dosh for the company to at least sustain its new distribution. 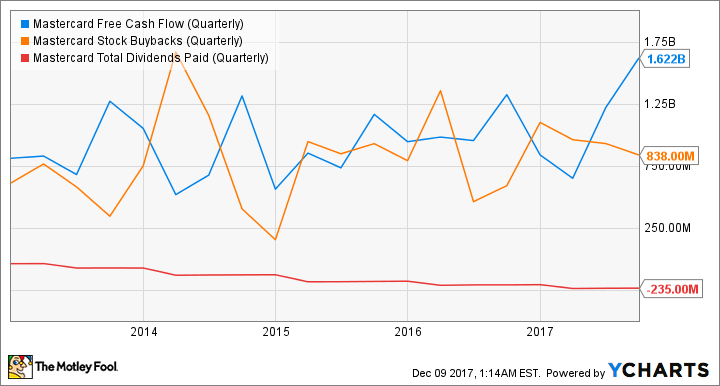 That dividend, which yields a theoretical 0.7%, will be paid on Feb. 9 to investors of record as of Jan. 9. Its payout ratio is only 19%.

The company's new stock repurchase program will kick in once the current initiative is exhausted. Around $1.5 billion in authorization remains in it.

Our second double-digit raiser for this week's article is medical device maker Stryker. A steady payer and raiser throughout this decade, the company has declared that its next quarterly dividend will be $0.47 per share. That's 11% higher than its predecessor. 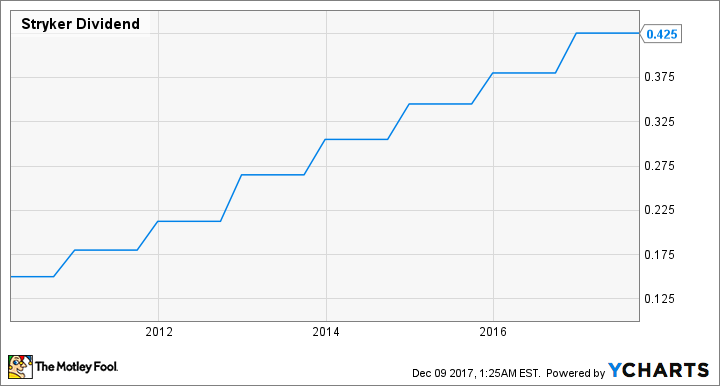 In announcing the raise, Stryker touted its "strong organic sales growth and leveraged adjusted earnings gains." Indeed, in Q3 all three of its business units delivered sales increases over the previous year's quarter thanks to higher volume. Combined, the trio pushed total revenue up by 6% to slightly over $3 billion. Adjusted net profit saw a 10% rise to $578 million.

The gain occurred in spite of a recall of certain lots of its oral care goods, which temporarily sapped the share price and led Stryker to reduce its guidance for the current fiscal year. Still, even with the trimming, the company anticipates year-over-year earnings-per-share growth of at least 11%.

Like Mastercard, Stryker is a bit on the miserly side when it comes to its dividend. What's good about this is that (1) it has plenty of FCF to cover it and then some, and (2) it leaves enough room for research and development, an activity that can be crucial in a competitive segment like devices. Considering this and the above factors, I'd say Stryker's new distribution is quite safe.

The cup continues to runneth over for dividend lovers. We're still not done with 2017 quite yet, so expect more raises in the closing weeks and days of the year. Watch this space for the latest.