With the Republican tax plan steaming through both houses of Congress, 2018 is shaping up to be a banner year in terms of consolidation for the biotechnology industry. Biopharmaceutical heavyweights Amgen (NASDAQ:AMGN), Gilead Sciences (NASDAQ:GILD), Johnson & Johnson (NYSE:JNJ), and Pfizer (NYSE:PFE), after all, each have stately sums of cash overseas that could become available if this proposed tax reform becomes reality.

Each of these cash-rich pharma giants also has a glaring weakness in their underlying product portfolio that could be shored up by additional M&A activity. Amgen is dealing with the loss of exclusivity for its blood-conditioning medicines Neupogen and Epogen, Gilead Sciences is experiencing a rapid decline in its hepatitis C franchise and facing new threats to its dominance in HIV, J&J's blockbuster arthritis drug Remicade is battling generic competition now, and Pfizer's top-selling pain medication, Lyrica, is near the end of its patent life as well.

With the Republican tax bill and the strong demand for new growth products in mind, I think Biogen (NASDAQ:BIIB), BioMarin (NASDAQ:BMRN), bluebird bio (NASDAQ:BLUE), Geron Corp. (NASDAQ:GERN), and Sage Therapeutics (NASDAQ:SAGE) are all likely to get taken out in 2018. Here's why. 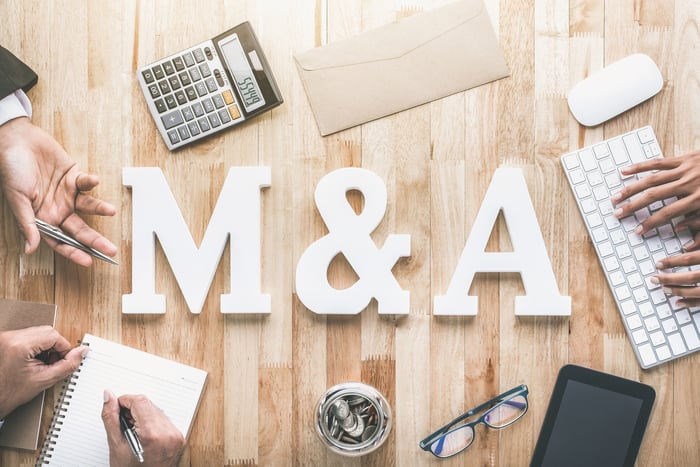 Biogen's a quick fix for an ailing top-line

While Biogen doesn't have the type of robust clinical pipeline that offers deep value to potential suitors, the biotech's market-leading multiple sclerosis franchise, and its new spinal muscular atrophy drug, Spinraza, are two pretty good reasons to put it on a list of potential buyout candidates.

Taken together, these two growth drivers would make Biogen an immediately accretive acquisition in most buyout scenarios, after all. Biogen's market cap of $69 billion is also arguably the perfect size for, say, a Pfizer that needs to bulk up first before eventually splitting into two separate companies -- a legacy products business, and an innovative healthcare company. Pfizer also doesn't necessarily need an influx of clinical candidates to make a deal worthwhile, making Biogen an ideal candidate.

BioMarin is the perpetual buyout candidate -- only to never get bought out. The underlying reason is that this rare-drug specialist, that now has six products on the market, sports a rather weighty valuation, to put it mildly. With a price-to-sales ratio of 12.33, BioMarin is, in fact, one of the most expensive biotech stocks in the world today.

However, BioMarin's top-notch clinical pipeline that's advancing high-value candidates for indications such as dwarfism and hemophilia A could tip the balance in favor of a buyout in a cash-rich environment. Biopharma giants like J&J, after all, have shown a willingness to pay top dollar for promising acquisitions when they come with longer-term growth prospects. And BioMarin's present market cap of less than $16 billion wouldn't be much of a barrier for any of the aforementioned companies -- that is, if they wanted a top-tier orphan drug product portfolio and clinical pipeline.

Bluebird is a top buyout candidate in 2018

Of these five buyout candidates, I think Bluebird is the probably the strongest lock to get taken out in 2018. The company's newly unveiled CAR-T data in multiple myeloma, after all, is simply too compelling to ignore for companies like J&J, or Bluebird partner Celgene Corporation. Long story short, bluebird's CAR-T candidate, bb2121, produced response levels in advanced multiple myeloma patients that could catapult this therapy to megablockbuster status in breakneck fashion.

Adding fuel to the fire, bluebird also has two other high-value, late-stage clinical candidates in the works for the treatment of transfusion-dependent beta-thalassemia and cerebral adrenoleukodystrophy, respectively. So with a price tag of only perhaps $15 billion to $18 billion in a buyout scenario, Bluebird comes across as a near surefire buyout candidate next year.

I think Celgene will be the company that brings home this top prize in biotech. With all that's at stake in multiple myeloma, after all, Celgene simply can't afford to let Bluebird get away. That being said, I wouldn't be surprised if Amgen, J&J, or Gilead also made a play for bluebird in 2018.

Geron will either sink or swim in 2018

Geron, a small-cap oncology company, is heading into 2018 with its very existence at stake. Bottom line: We should know whether the biotech's telomerase inhibitor, imetelstat, is a viable blood cancer drug by the end of next year. If not, there's no realistic path for Geron to continue as a going concern.

The bright side is that Geron, and its development partner J&J, recently released some rather intriguing early-stage data for imetelstat in myelodysplastic syndromes (MDS) that support their thesis in this rare bone marrow disorder, as well as some other non-clinical data suggesting a broader utility in blood cancers in general.

The short version of the story is that imetelstat may turn out be an important new drug for patients with a specific form of MDS, a treatment of last resort for patients with advanced myelofibrosis (MF), and a backbone therapy for other blood-based cancers. J&J, by virtue of its insider status, is the obvious potential suitor for Geron.

What's the likelihood of a buyout? Provided imetelstat's overall efficacy profile in advanced MF are compelling enough to warrant further development, I'd imagine that J&J would begin negotiations, and that Geron would listen intently.

Geron CEO John Scarlett, after all, has a history of selling promising experimental-stage biotech companies well before their lead candidates begin to realize their commercial potential. And at 66 years of age, he probably isn't planning on seeing imetelstat through another five to perhaps 10 years of clinical development. So my view is that Geron is either going bankrupt or getting bought out in 2018.

After hitting on both a late-stage trial for postpartum depression with its lead clinical candidate brexanolone, and a mid-stage trial for major depressive disorder with SAGE-217 this year, Sage Therapeutics is almost certainly on the radar of most Big Pharmas at this point. The anti-depression drug market, after all, is worth tens of billions in annual sales.

The big ticket item is that SAGE-217 appears more than capable of producing approvable results in a forthcoming late-stage trial, based on its outstanding mid-stage results, where the drug proved to be both highly efficacious and well tolerated. In short, SAGE-217 may have what it takes to be a franchise-level anti-depression drug, which is a highly sought-after commodity in the pharmaceutical industry.

Sage's $6.7 billion market cap is also no impediment whatsoever for top dogs like Pfizer that already have a global footprint in the psych medication space. The only question, therefore, is whether a suitor wants to take the risk to wait for SAGE-217's pivotal stage data. Another company, after all, could scoop it up in the interim.

As buyout scenarios often fail to materialize, you should arguably never buy a stock simply for its potential as an acquisition target. That said, I'd be surprised if Bluebird or Sage made it all the way through 2018 without at least one offer. Both of these companies are developing products that could turn out to be disruptive forces in their respective indications, after all.

Biogen and BioMarin, on the other hand, are probably only strong acquisition targets in the event that the Republican tax bill results in a sizable cash influx for the top players in the field. And Geron will have to prove itself with additional imetelstat data to become a bona fide takeover candidate.

So while I do own a small position in Geron, I think Bluebird and Sage are the two most compelling buys of the bunch. These two emerging drugmakers should produce strong returns on capital regardless of their fate as buyout candidates, making them suitable growth vehicles for most types of investors.