Shares of SunPower Corp. (NASDAQ:SPWR) surged as much as 16% in trading Monday on little more than an analyst upgrade and word that  a competitor had received an offer to take it private. It was just another episode in a year during which SunPower's stock has oscillated dramatically on little more than speculation or industry sentiment.

But if we take a step back, there's reason to think this solar cell maker may turn its business around in 2018, and drive the stock higher for more fundamental reasons. There are a lot of risks, but here's how SunPower's stock could keep the momentum going, and maybe even double in 2018. 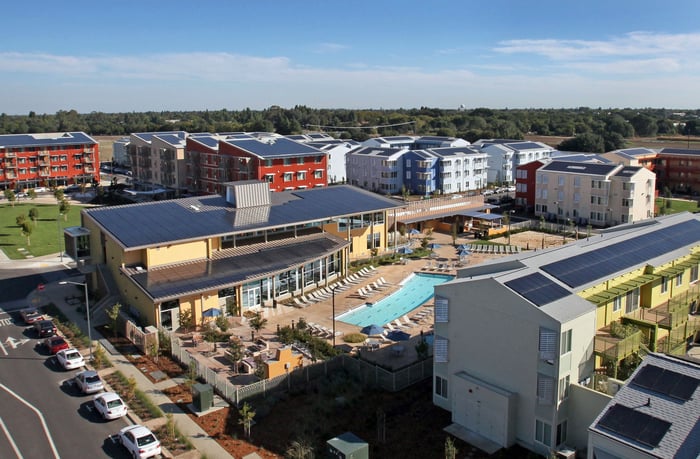 Selling the assets no one appreciates

One thing solar manufacturers have come to realize is that the market doesn't place much value on owning project developments. First Solar (NASDAQ:FSLR) and SunPower launched the yieldco 8point3 Energy Partners (NASDAQ:CAFD) together and it's been nothing but a headache for them ever since. Canadian Solar (NASDAQ:CSIQ) built the assets to launch a yieldco, but was forced to sit on the projects when the yieldco market collapsed. Now, First Solar and SunPower are trying to de-emphasize the project-development business.

For SunPower, the utility-scale solar business has been the biggest problem: The company didn't have a sustainable advantage in the segment. Now, it's selling all of the utility-scale assets it can in a move to reduce the $1.8 billion worth of debt on its balance sheet, $1.125 billion of which has recourse to SunPower (meaning it's not backed directly by solar project assets).

Selling 8point3 Energy Partners would be a big step in the right direction. The 28.9 million shares the company owns would be worth $412.7 million at Monday's closing price of $14.29, but a buyout at $18 per share -- where I've predicted an offer could land -- would yield SunPower $519.9 million.

SunPower also owns 516 MW of projects in Mexico that will be completed in 2018 and 111 MW in Chile that will be complete this year. Selling these projects would bring in at least a few hundred million dollars, further easing stress on the balance sheet. When all is said and done, it could generate enough from asset sales to pay off the $300 million in convertible debt coming due in 2018 and be near a net positive cash balance after pulling out non-recourse debt. But it will have to complete project sales at a good price in order for its stock to rise consistently in 2018.

Will U.S. tariffs take a bite out of SunPower's best markets?

Right now, the market is pricing the damage that solar panel tariffs could do to solar businesses into their stocks. President Trump will make a decision on whether to impose those tariffs on imports in the next few weeks and, if so, at what levels.  Trump could effectively kill the U.S. solar industry he sets tariffs too high. Given that, it's hard to see a way that high tariffs wouldn't have a negative impact on SunPower, although predicting the magnitude of the potential damage at this point is difficult.

However, if Trump imposes low import tariffs, or he chooses to adopt the import license plan that was proposed by one trade commissioner, SunPower's business might not be negatively impacted at all. Such a result would likely send the stock shooting higher.

Residential and commercial solar are SunPower's strongest segments, and they'll need to stay strong for the company to be successful long term. Good news on tariffs will make that much more likely; indeed, depending on how a trade remedy is structured, it could keep some of SunPower's competitors at bay, and actually help the company.

P-Series is the wild card

What we have less visibility on is SunPower's new P-Series solar panel. It's built with commodity cells, which are shingled to make a panel that's slightly more efficient than those offered by competitors.

SunPower will be ramping up P-Series production in 2018, and will have 1.2 GW of manufacturing capacity built by the end of the year. If the company sells panels swiftly and combines them with its Oasis power block, it could drive nearly $1 billion of incremental growth. SunPower has plans to build as much as 5 GW of P-Series manufacturing capacity in China, along with a plant in Mexico, and it has options to expand elsewhere. But the company's entire utility segment is dependent on P-Series being a hit. If contract signings start rolling in, expect it to drive shares higher.

How 2018 plays out for SunPower will come down to some pretty binary factors. Either the company isn't impacted too harshly by solar import tariffs, sells assets, and continues its march toward profitability, or its business is upended by tariffs, and management has to scramble to keep it afloat.

If a few factors work in SunPower's favor, it could lead to an increase in margins, and considerable growth. That kick-start start the stock, which I'm betting will happen in 2018.