Please ensure Javascript is enabled for purposes of website accessibility
Log In Help Join The Motley Fool
Free Article Join Over 1 Million Premium Members And Get More In-Depth Stock Guidance and Research
By Jeremy Bowman - Dec 15, 2017 at 8:25AM

Both Nike and Under Armour have struggled this year, but one looks closer to a turnaround than the other.

If you're a sportswear company not named Adidas (ADDYY -2.11%), you probably haven't been doing very well lately.

Both Nike (NKE -5.42%) and Under Armour (UA -1.91%) (UAA -1.07%) have been lagging behind the ascendant European interloper, which has capitalized on vintage styles, celebrity partnerships, and new technologies like Boost to drive sales nearly 30% higher in North America. 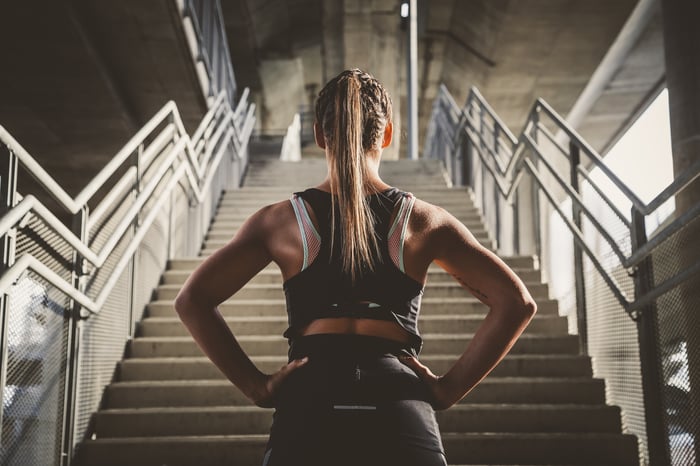 But it's not just Nike and Under Armour that have suffered in the wake of Adidas' rise. Sporting goods retailers in general have been getting creamed -- key partners like Foot Locker, Finish Line, and Dick's Sporting Goods have seen growth sputter in recent quarters, and their stock prices have tanked with it. The chart below tells the tale. 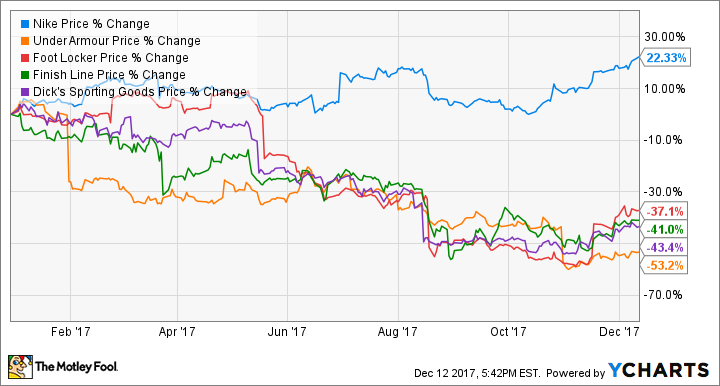 As you can see, Nike has bucked the trend in the industry, but most of the stock's gains this year have come in recent weeks. This has been due to both excitement following the company's recent Investor Day presentation and retailers in general posting better-than-expected results in the most recent round of earnings. Retail strength was not enough to prompt a rebound in Under Armour, however.

Let's take a closer look at what these two sportswear giants have to offer investors today to determine which is the better buy.

While the chart above shows Nike stock has gained 22% this year, the company's results themselves haven't been any cause for excitement. In the Swoosh's most recent quarter, revenue growth was actually flat, and gross margin fell 180 basis points in part due to increased markdowns, a sign that the company's product is not moving as fast as it usually does -- which means Nike misread market demand, or its styles aren't resonating as well as they once did. Operating income fell 16% in the quarter, but investors were willing to look past that once the company released a bold plan at its investor day conference in October.

Following up on the consumer direct offense strategy it outlined in June, Nike said in October that it would radically redefine its approach to retail, prioritizing just 40 partners around the globe who are willing to give it special treatment as it focuses on its own e-commerce and brick-and-mortar channels. In addition to promising to double its speed to market, product innovation, and direct connections with consumers, the company also launched a new NikePlus membership giving members-only access to special products, similar to the bonuses that come with a purchase of its new NBA jerseys.

Nike also outlined new financial goals, pushing a target of $50 billion in revenue forward from 2020 to 2022 and guiding for mid-teens earnings-per-share growth over the next five years. That plan, along with a rebound in brick-and-mortar retail performance, has raised expectations among investors. Look for improved performance when the company reports second-quarter earnings later this month.

A fall from grace

Under Armour, on the other hand, has run into many of the same problems as Nike, including slowing growth at home. But its stock has really gotten hammered because shares were so pricey before. Shares are down 53% this year, and about 75% since their all-time high in 2015.

A number of issues have combined to crush the one-time market darling. Sales of the Curry 3, the signature shoe from the company's most important spokesathlete, Steph Curry, underwhelmed; consumers did not seem to like the design, a big miss for the company in a key category. Meanwhile, Curry's prominence in the NBA seems to be fading from the starstruck 2015-2016 season, and teammate Kevin Durant, whose own dis of Under Armour shaved a few points off the stock, has stolen some of the spotlight. Comments by CEO Kevin Plank earlier this year embracing President Trump were also seen as an incredible gaffe for a company desperate to make its products fashionable on the urban street the way Nike's Air Jordans have been for the last generation. Seeing as the majority of sportswear and sneaker sales are for fashion, not performance, Under Armour will need to make this transition if it wants to reach the size of Nike or Adidas. Under Armour has also been challenged by bankruptcies from retail partners like The Sports Authority, as it's more dependent on those channels than Nike or Adidas.

In its most recent quarter revenue fell 5%, with sales dropping 12% in North America and wholesale revenue down 13%. Like Nike, Under Armour saw gross margin dip 160 basis points, due in part due to lower pricing. Operating income dropped by nearly 75%, and the company slashed its guidance for the full year. It now expects earnings per share of just $0.18-$0.20 for the full year, indicating a weak holiday season. With numbers like those, it's not a surprise Under Armour shares are in the dumps.

Both Nike and Under Armour are in turnaround mode after their recent reports. Under Armour was a one-time growth darling, and while its international segment remains solid, it's hard to call a company projecting low-single-digit revenue for the year a growth stock. Even with that forecast, Under Armour shares are trading at a P/E ratio of about 70.

Nike is also spinning its wheels, but it carries a more modest P/E valuation of 26, and the company has a proven history of recovering from such challenges. It also has a more established brand than Under Armour, and should be able to better weather the changes going on in retail.

The Swoosh is clearly the safer bet here, as it's considerably more profitable than its smaller rival and its earnings better withstood the recent headwinds. While Under Armour could eventually bounce back, the retail upheaval has rewritten the rules in the sector, and Under Armour has struggled thus far to adapt.

Nike has the clearer turnaround strategy of the two and the stronger pedigree. It's the better buy today.