And now, analysts at Stifel Nicolaus are saying Fitbit stock could go down even more. 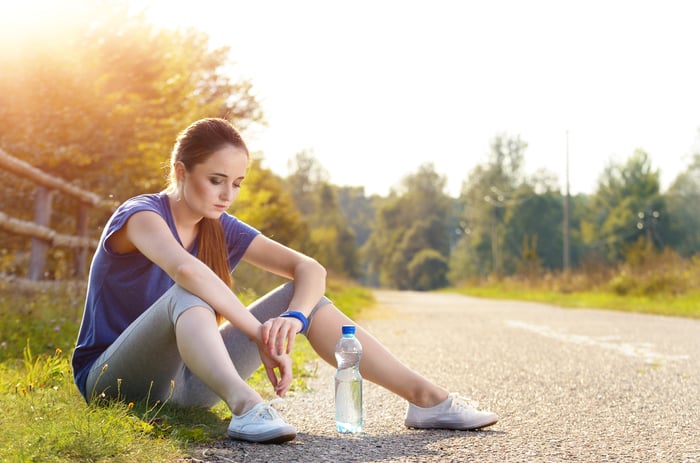 Fitness enthusiasts just aren't as excited about fitness trackers in 2017 as they once were. Image source: Getty Images.

This morning, Stifel announced it is downgrading Fitbit stock from hold to sell. With a price target of $6 and a closing price yesterday of $6.82, this implies at least 12% downside to the stock. But why does Stifel Nicolaus think things will go so wrong for Fitbit?

In a nutshell, the answer is that Stifel thinks Fitbit is about two years past its shelf life -- and unlikely to get any fresher as the years go by.

Fitbit reached the top, now it's all downhill

2015 was the high-water mark for Fitbit, with sales of nearly $1.9 billion yielding nearly $176 million in profits, and about $79 million in free cash flow. Last year, Fitbit continued growing sales to nearly $2.2 billion -- but with no improvement in profits.

To the contrary, data from S&P Global Market Intelligence show that in 2016, Fitbit lost nearly $103 million on its greater level of sales. Free cash flow was still positive -- about $31 million -- but GAAP profits were not. And things are looking even worse this year, with all three indicators pointing down.

So far in 2017, Fitbit has booked barely $1 billion in sales (down 35% from where Fitbit was at this point last year). Losses are surging ($232 million lost so far this year). And free cash flow has evaporated. In fact, Fitbit has already burned through $50 million in negative free cash flow.

Stifel sees no end to the pain for Fitbit. As explained today in a write-up on StreetInsider.com (requires subscription), Fitbit would need to show sales growth in the mid-teens to earn a profit on gross margins in the "mid-40s." Instead, S&P Global figures are showing Fitbit with a 36% trailing gross margin, declining sales this year, and expected sales growth of only 6% in 2018, and 5% in 2019.

The upshot for Fitbit investors

Numbers don't lie, and the numbers Stifel Nicolaus is highlighting tell a worrisome tale for Fitbit. According to the analyst, "fitness tracker relevance continues to wane," StreetInsider.com writes, which we're seeing reflected in Fitbit's falling sales this year and the weak growth projections for years ahead. At the same time, Sports Illustrated (which should know a thing or two about this) says that the fitness market is trending away from Fitbit's wearable wristbands and fobs and toward more accurate trackers incorporated into clothing and footwear.

In a prescient article published last December, SI predicted that "[s]ports technology might start to disappear in 2017," with wristbands and fobs being replaced by RFID tags from Zebra Technologies and sensors embedded in Under Armour sneakers instead. Such new products don't need to be recharged like Fitbits (SI notes that the power source used in Under Armour's shoes is rated to last longer than the shoe itself). They're also "invisible" to third parties, making them both easier to use and less obtrusive.

As for Fitbit itself, one of the pioneers of the fitness tracking movement, Stifel isn't predicting its stock will also disappear, exactly, but that the analyst "cannot advocate owning FIT shares."