Predators and Reapers and Ravens (oh, my!) Nearly 15 years of televised war in the Middle East have trained Americans to think of "drones" as an American invention. But in case you haven't noticed, these past few years, the "bad guys" have learned how to use drones, too.

In Israel, hostile drones flown by Hezbollah out of Lebanon are a continual menace. In Iraq, ISIS forces deployed homemade and small commercial drones to drop grenades from the sky. Meanwhile, U.S. rivals Iran, China, and Russia all have well-developed drone programs of their own.

Once a friend, now the U.S. Army finds itself having to think of drones as a potential foe as well -- and figure out new ways to shoot them down. 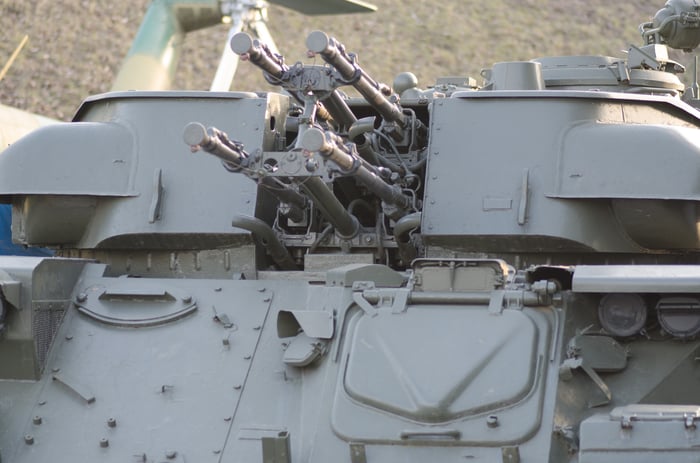 To do that, the U.S. Army announced last week a Request for Information (RfI) inviting defense contractors to propose for it a new "counter-unmanned aerial vehicle" (C-UAV) system for defending ground forces against drone attacks from the air.

Dubbed "Interim Maneuver Short-Range Air Defense" (IM-SHORAD), the weapons system that the Army is looking for would ideally be installed upon an existing platform (the General Dynamics (NYSE:GD) Stryker armored personnel carrier) and be compatible with an existing air-search radar system (the AN/MPQ-64 Sentinel air-defense radar built jointly by Thales and Raytheon (NYSE:RTN)).

IM-SHORAD would comprise three separate, "selectable" defensive weapons systems, to be chosen among depending on whether a Stryker is attacked by a fixed-wing aircraft, a helicopter, or a drone:

Rockets and guns on Strykers are of course old hat. Leaving those aside, let's focus on the cool part -- the laser.

DoD is placing its priority on a non-kinetic weapons system capable of taking out, firstly, drones of Group 2 and 3 (roughly the size of a Boeing (NYSE:BA) ScanEagle or Textron Shadow, respectively), and secondly, smaller, usually unarmed "Group 1" scout drones (similar in size to AeroVironment's Raven).

How big must a laser be to accomplish this task? Over at the Navy, the 33-kilowatt, circa-2015 Laser Weapon System proved itself capable last year of shooting down ScanEagle drones (Group 2) in flight. This confirms that a 30-kW-ish laser would suffice to handle Group 1 and 2 drone threats -- maybe even Group 3.

Who might build such a weapon, and respond to the Army's RoI? We should know more later this year, but for now:

In other words, the field is wide open. All five of the major defense contractors (in addition to the four named above, General Dynamics is cooperating with Boeing to turn its laser into a "laser Avenger" mobile anti-aircraft platform) have laser cannons of various power ratings in the works. I'd expect all of them to bid on IM-SHORAD.

The Pentagon is requesting contractors to provide "information" and "production representative prototypes" of a defensive weapons system for review no later than Dec. 22, 2017. Following examination of these submissions, the Pentagon plans to issue an official Request for Proposals to build these weapons at scale next year. Then, after picking a winning bid, the Pentagon will place an order for 36 defensive systems to be installed on Stryker armored personnel carriers by the end of 2020, followed by another 36 units ordered at the end of 2021.

Granted, 72 units doesn't sound like much -- but this could be just the start. If the weapon proves effective after initial trials, this program could grow rapidly. At last count, General Dynamics had manufactured some 4,700 Strykers for the Army. Depending on how much the Army is prepared to pay for IM-SHORAD, this program could mean big bucks for the winner -- and a whole new way of fighting wars.