The company is teaming up with a business jet-focused development company to explore the possibilities of superfast travel.

The two companies, working with the jet engine division of General Electric, said that over the next year they hope to finalize plans for the engineering, certification, and eventual production of the jet. They hope to combine the engineering and specialty-materials expertise Lockheed Martin has developed as the manufacturer of the F-35 and F-22 with Aerion's work on flying faster than the speed of sound to come up with a viable economic model. 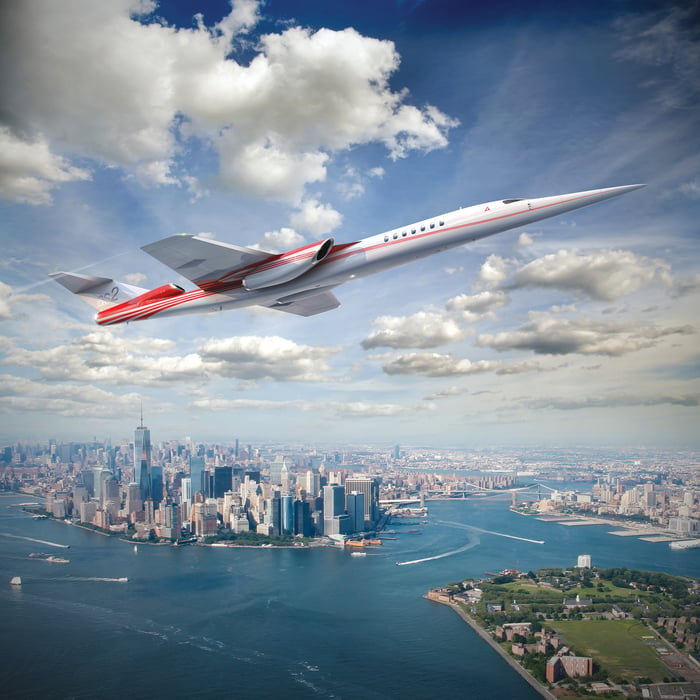 A rendering of the Aerion AS2 in flight over New York City. Image source: Aerion.

There are still a number of hurdles to be worked out.

One major reason there hasn't been commercial supersonic transport since the Concorde was retired, in 2003, is the loud "boom" that bellows out as the waves of pressure created by the movement of the aircraft are compressed and form a shock wave. The Federal Aviation Administration in the early 1970s banned supersonic travel over the United States to avoid subjecting citizens to sonic booms and broken windows, greatly reducing the usefulness and the available range when traveling fast.

There is also added cost in terms of design, materials, and fuel consumption required to create and operate a plane capable of flying at supersonic speeds, and a limited usefulness on trips that span hundreds of miles instead of thousands. It's unclear how big the market would be for a premium-priced business jet whose major selling point, the ability to go faster, is of minimal added value for average-length trips.

Not your father's supersonic aircraft

Aerion claims that its jet, the AS2, uses advances in aerodynamics and structural design that should address some of the cost issues and greatly reduce the sonic boom. The Reno-based company, which was formed in 2003 to acquire a team that had been working on supersonic flight, has been refining and working to commercialize the technology for more than a decade.

The key to the company's design is what it calls supersonic natural laminar flow, a wing design that uses precision manufacturing and carbon fiber materials to allow air to flow smoothly across wing surfaces without creating turbulent layers. The company says the design reduces total airframe drag by as much as 20% compared to the delta wing configuration used by the Concorde.

Aerion argues that the design allows its plane to use less fuel at both supersonic and subsonic speeds, making it efficient even when over land. The design also greatly reduces the sonic boom. Aerion has more than 40 patents related to the plane and its design, and says it sees a global market for upward of 400 aircraft during the first 15 years of service.

Lockheed Martin's famed Skunk Works has been researching ways to reduce sonic booms for decades, and in fact in the 1990s partnered with business-jet maker Gulfstream, now a part of General Dynamics, to look into a business-jet design. That partnership didn't work out, in part because of the overland ban, but over the years, Lockheed has been a leader in developing supersonic military planes, including the F-16, F-35, and the SR-71 spy plane capable of flying three times the speed of sound.

"This relationship is absolutely key to creating a supersonic renaissance," Aerion Chairman Robert M. Bass said in a statement. "When it comes to supersonic know-how, Lockheed Martin's capabilities are well known, and, in fact, legendary."

Should the companies move forward toward producing a plane for market, by the time it is available for delivery, supersonic jets might not face the same regulatory hurdles that the Concorde once did. A group of Republicans late last year called for repealing the regulation prohibiting supersonic flights over land. Aerospace companies have been pushing for the regulation to at least be modified to be based on the size of the boom and not just the speed of the plane, arguing that advances in design now make it possible to travel at higher speeds without generating a sound that disrupts life down below.

For Lockheed, partnering with Aerion is an opportunity to potentially commercialize its existing supersonic research and to help further justify future development work. NASA is interested in commercial supersonic flight as well, and since 2016 has been working with Lockheed Martin on a preliminary design for a "low-boom" demonstration aircraft.

With competitors Boeing and Honeywell, among others, also working on modern supersonic technology, it makes sense for Lockheed to find ways to carve out a potential place in the market. Gulfstream also remains focused on creating a supersonic business jet, and would be a potential competitor to Aerion if and when regulations are changed.

The Aerion partnership, even if it is a wild success, doesn't seem likely to become a huge revenue contributor to Lockheed or help the company in its effort to diversify to avoid becoming overly reliant on the F-35 fighter, but it is a relatively low-risk way to add exposure to an area that could eventually grow into a solid business.