For a while, Fitbit Inc. (NYSE:FIT) dominated the wearable tech space, and the company seemed like a no-brainer of a tech investment because of its strong unit sales, enviable wearable tech market share, and strong product lineup. But the tide has turned against Fitbit lately, and I think there's a serious concern for investors who are still betting on the stock.

Specifically, Fitbit is facing too much pressure in the high-end wearable market from Apple (NASDAQ:AAPL) and is fighting off additional competition at the low end of the market from Xiaomi and other makers of inexpensive wearables. 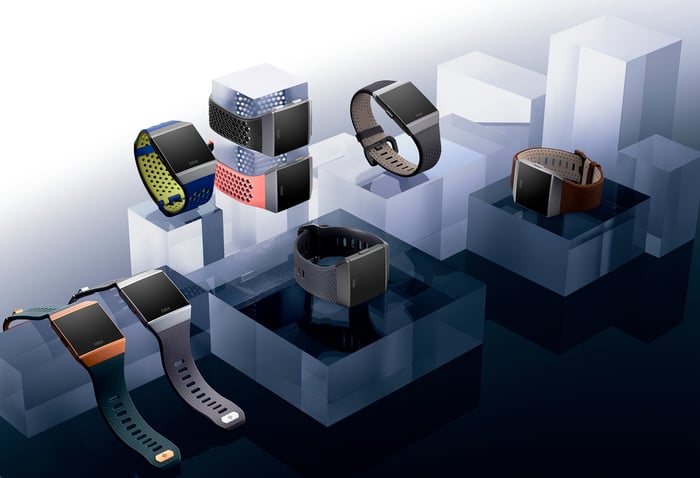 Let's start with how inexpensive fitness trackers are hurting Fitbit. In mid-2017, Strategy Analytics published a report that showed that China-based tech company Xiaomi had leap-frogged Fitbit's wearable sales to take the No. 1 wearable vendor spot by shipments.

At the time, Xiaomi held 17% of the worldwide wearable tech market, and Fitbit followed closely behind with 16%. That might not seem all that bad, but it looks much worse when you consider that Fitbit held 26% of the market just a year earlier.

Xiaomi's gains came because the company was able to increase its sales of inexpensive wearables in China, but Fitbit also slipped because its shipments in the quarter fell by 40% year over year.

Could Fitbit regain its lead in the low-end market by changing its pricing strategy or releasing new low-end devices? Possibly. But the problem is that the company has recently transitioned much of its attention to high-end products like its new Ionic smartwatch, specifically because it was looking to boost margins and profits. That transition, while a logical move, has actually brought about Fitbit's second competitive problem: taking on Apple.

In an effort to outpace its competitors in the low-end market and keep up with increasing consumer demand for more high-end wearables, Fitbit decided to enter the smartwatch race in late 2017. The company launched its Ionic smartwatch with high-end features like GPS, Bluetooth, a heart rate monitor, workouts built into the device, contactless payments, onboard music, etc.

The Ionic was, and is, Fitbit's hope for the future. The problem is that it costs just $30 less than the base price for a new Apple Watch, which has nearly all of the same features as the Ionic but one-ups the Ionic by adding a cellular connection and Apple's vast app ecosystem.

That new cellular connection on the Apple Watch Series 3 means it can make and receive calls and texts, without having to be tethered to your phone. That's a big plus for a wearable device, and it would be worth the $30 to go with an Apple Watch. But the biggest problem is that Fitbit doesn't have the same app ecosystem that Apple offers its customers.

Apple's been building out its App Store for years for its Phone, iPad, and now Apple Watch, and it's nearly impossible for any other small company to replicate how it integrates its hardware and software together. I think consumers are simply going to have a hard time spending $300 on an Ionic watch with a limited number of apps when they can spend $330 and tap into Apple's vast developer network of apps, its superior software and device quality, and the peace of mind knowing that Apple and its apps will be around for many years to come.

I don't see this changing

For all of the above reasons, I don't see Fitbit's Ionic smartwatch overtaking the Apple Watch a few quarters from now -- or ever. And if I can't imagine a world where the Ionic beats the Apple Watch, then that leads me to believe that Fitbit is betting on a losing horse. Sure, Fitbit's unit sales might bounce back from some of its current declines because of the Ionic. And yeah, the holiday quarter may help boost its top line.

But if we fast forward a year from now I think we'll see that Apple has taken more of the smartwatch market, low-end players like Xiaomi have continued to grow at the low end, and Fitbit is left fighting in the middle, but never quite winning on either front.