Please ensure Javascript is enabled for purposes of website accessibility
Log In Help Join The Motley Fool
Free Article Join Over 1 Million Premium Members And Get More In-Depth Stock Guidance and Research
By Brian Stoffel - Dec 21, 2017 at 10:45AM

One is a buyout candidate, but is that enough to make it a screaming buy?

While the world around us is constantly changing, some things will always remain the same. One of those things is this: we love being entertained. Two companies that are at the forefront of this universal truth are Disney (DIS 1.84%) and Mattel (MAT -1.12%).

Today, we'll be looking to see which of these two has the better stock. Our answer will involve evaluating them on three different criteria. The winner, as you'll soon see, is very clear. 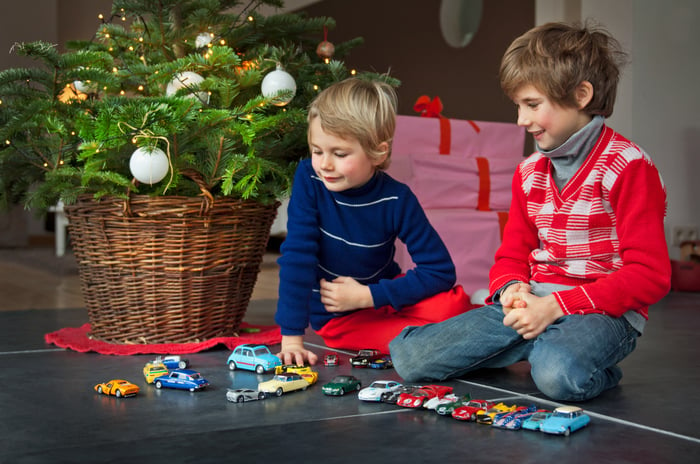 Both companies hope to be popular with kids this holiday season. Image source: Getty Images

Though we're trying to determine the best stock, it's crucial to recognize that if you're a long-term, buy-to-hold investor, you're really buying a small stake in a company when you purchase shares. And there's nothing more important to the company's long-term health than its sustainable competitive advantages.

Often referred to as a "moat" in investing circles, a sustainable competitive advantage is the simple something that keeps customers coming back for more, year after year, while holding the competition at bay for decades.

Mattel's moat is provided by the brands of toys and games that it offers. These include American Girl, Barbie, Fischer-Price toys, and -- fittingly -- the right to market toys of several Disney properties, among others. While these are iconic brands, their popularity with new youngsters has been fading, an ominous sign for shareholders.

Disney, on the other hand, also benefits from brand-name power. Forbes recently listed it as the 7th most valuable brand in the world, worth $44 billion. The acquisition of some Twenty-First Century Fox (FOX) properties also add value, and help bolster Disney's ambitions for a streaming service. Because it also operates a number of enormous theme parks around the world, Disney also benefits from some regulatory protection, as it can be very difficult to convince localities to devote the land necessary for competing parks given Disney's entrenched position.

Most shareholders would obviously love to see cash being returned to them, either in the form of dividends or share buybacks. But while those uses are nice, there's something to be said for a company keeping a plain, boring pile of cash on hand.

That's because every company, at one point or another, will face difficult economic circumstances. When those times hit, companies with enormous war chests can often emerge stronger, buying back shares on the cheap, acquiring rivals at a discount, or -- most importantly -- undercutting the competition by offering lower prices and gaining long-term market share.

Keeping in mind that Disney is valued at over 30 times the size of Mattel, here's how the two match up.

This, again, is an easy call. While Disney's balance sheet isn't necessarily stellar, Mattel has more than ten times more debt than cash on hand. And Disney has prodigious free cash flows, while Mattel has actually lost money over the past twelve months -- a very bad sign for such an established company.

Finally, we have valuation. There's no one metric that lets you know if the stock you are buying is cheap or expensive. Instead, I like to look at a number of different metrics to get a more comprehensive perspective. Here are three of my favorite.

All of those "N/A" s are telling. Mattel actually used to offer a pretty hefty dividend, but because of problems with its business and negative free cash flows, they were forced to cut it earlier this year.

At 19 times free cash flow, the addition of some of Fox's assets, and moves toward its own streaming service, Disney's stock looks like a fair value at today's prices.

So there you have it: a clear sweep. Disney has a stronger business, a healthier balance sheet, and a more favorable valuation. While an acquisition of Mattel by Hasbro (HAS -0.65%) could provide some relief to shareholders -- which is why I would caution against shorting the stock -- the long-term trends are decidedly in Disney's favor.