Please ensure Javascript is enabled for purposes of website accessibility
Log In Help Join The Motley Fool
Free Article Join Over 1 Million Premium Members And Get More In-Depth Stock Guidance and Research
By Dan Caplinger - Dec 21, 2017 at 7:45AM

Despite a soaring share price, the airline hasn't let its payout truly fly.

Southwest Airlines (LUV 1.69%) stands out from its airline peers because of its consistent profitability. Even at times when other players in the industry were going through bankruptcy filings and other tough times, Southwest found ways to sustain its low-cost business model, with only minimal disruptions along the way. Now, the airline industry has recovered, with most rivals using revenue-raising methods like baggage fees along with slimmed down passenger perks to boost profits. Consolidation among the biggest players in the industry has reduced the painful fare wars that plagued airlines in years past.

Yet one thing that remains less than perfect for Southwest Airlines is its dividend policy. Despite recent efforts to keep its payout growing, Southwest's current yield looks stingy. With that in mind, investors want to know whether the airline will keep looking to make aggressive increases in its dividend in the coming year. Let's take a closer look at Southwest Airlines and whether shareholders are likely to get higher payouts in 2018. 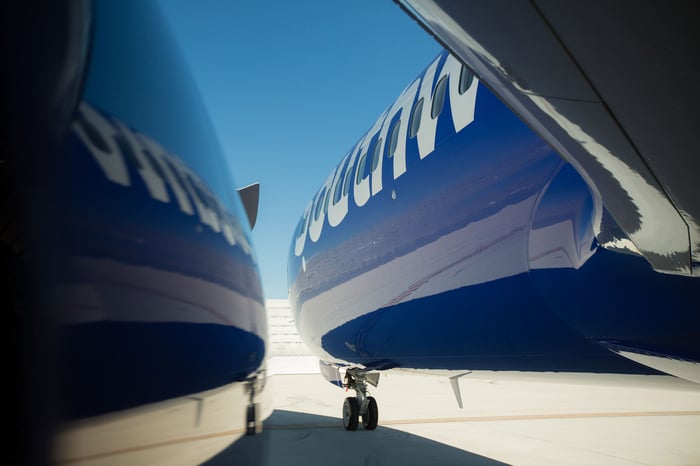 Southwest's current yield of 0.8% is puny, and its six-year streak of giving investors annual dividend increases doesn't look all that impressive. Yet when you look more broadly at the airline industry, you'll see how rare it is to see companies with much of a dividend history at all. Among the other major carriers, only one -- Delta -- has a higher dividend yield than Southwest. American Airlines manages just to match Southwest's yield. Moreover, both Delta and American have only paid dividends for three or four years, and United Continental hasn't looked to return capital to investors through dividends at all since its most recent merger and reorganization. Among smaller carriers, companies such as JetBlue and Spirit Airlines don't pay dividends, and even standouts such as Hawaiian Holdings and Alaska Air make relatively modest payouts.

By contrast, Southwest has been treating shareholders well on the dividend front for decades. Admittedly, most of Southwest's early dividends were token payments, but the airline took pride in being able to sustain its commitment to its investors even during extremely tough times for the industry over the years. 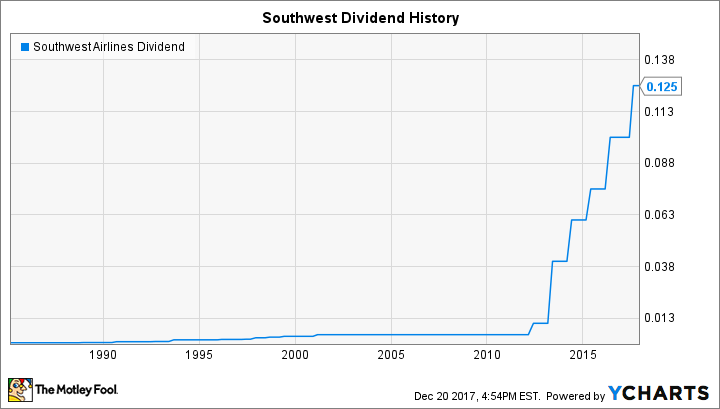 However, the past five years have brought a new philosophy toward dividends to the Southwest investor community. The airline more than doubled its payout in 2012, quadrupled it in 2013, and then has made increases of between 25% and 50% each year from 2014 to 2017, including its most recent 25% boost back in May.

Why has Southwest been so successful?

Southwest has benefited from the same positive trends that have helped its airline peers. The company has grown its scale through mergers, and consolidation among other major carriers has given it more pricing power to keep fares up while still remaining competitive and committed to its low-cost philosophy. Smarter route and asset management has enabled carriers to control capacity while still meeting traveler demand. Even though Southwest has resisted moves to impose baggage fees on every bag as some airlines do, that has worked to differentiate it from its rivals.

More recently, Southwest has also gotten a break from reduced costs. The plunging price of oil has led to greatly reduced fuel costs for its fleet. In addition, the plunge in fuel costs has benefited Southwest. The airline hasn't reaped all of the gains from falling energy prices because it had hedged its needs for future years before the drop. Nevertheless, Southwest isn't fully hedged, and its earnings have risen dramatically over the past year due to the favorable environment.

What's next for Southwest?

The problem that income investors have to contend with at Southwest is the fact that the airline has huge growth opportunities for which it needs cash. The airline has made major route map expansions, going international and now looking to offer service to Hawaii. To keep expanding, the company might need to purchase hundreds of new 737 aircraft in the coming years, adding to Southwest's already impressive capital spending budget. Tax reform might help to bolster Southwest's after-tax cash position, but the airline still faces multiple needs for its hard-earned capital.

Southwest has delivered dividend increases consistently in recent years, and barring a sea change in the industry's financial health, it's likely to do so again in mid-2018. Yet a likely move to somewhere between $0.15 and $0.20 per share on a quarterly basis still won't do much to lift the stock's dividend yield far above the 1% mark. That will leave it ahead of many of its peers, but still far from matching the cream of the industry's dividend stock crop.