One of last week's biggest winners was Discovery Communications (NASDAQ:DISC.A) (NASDAQ:DISCK), as its two classes of shares moved nearly 14% higher following an analyst upgrade. Jessica Reif Cohen at BofA/Merrill is boosting her rating on the cable network giant from neutral to buy.

Cohen feels that Discovery's pending acquisition of Scripps Networks (NASDAQ:SNI) will yield healthy synergies and deleveraging potential. She feels that the market is pricing in deal uncertainties, affording today's investors an attractive risk/reward profile. She is increasing her price target from $26 to $30. 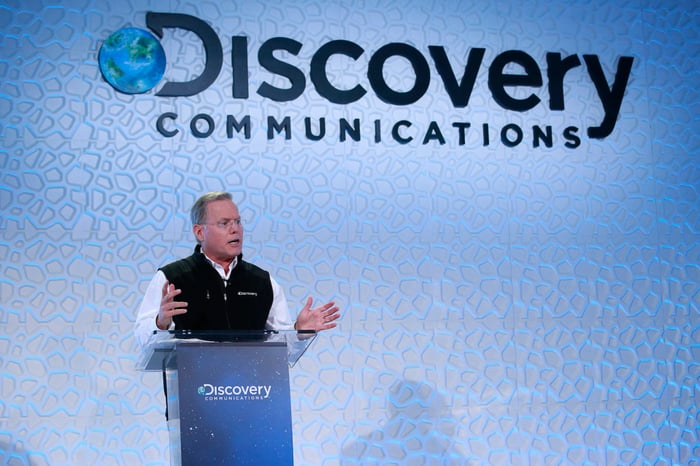 Climbing out of a big hole

Discovery Communications has had a lousy 2017. The general market's rallying, but Discovery stock has shed 13% of its value this year even after last week's surge. The cord-cutting revolution has been weighing on the companies behind the cable channels that stand to shed subscribers as folks wean themselves off costly bundles.

Discovery operates more than a dozen U.S. cable and satellite television properties including TLC, Animal Planet, and a few namesake networks. Discovery's slate of channels is typically offered in cable and satellite television subscription packages, but the future is murky as consumers turn to streaming services where they have greater say in the content that they are paying for. Discovery also owns several international properties.

This will be Discovery's third consecutive year of revenue growth in the low single digits. It's in a rut, and we may get to the point where rate increases aren't enough to offset the gradual defection of cable and satellite television subscribers. The acquisition of Scripps next year -- another company with second-tier cable properties including HGTV and Food Network -- should provide a near-term boost, but the organic trend will continue to be challenging.

Discovery has been a disappointment for investors beyond this year's languishing stock action. Discovery has fallen short of Wall Street's profit targets in each of this year's first three quarters. Naturally, any realized cost-saving synergies following the purchase of Scripps will help on that front.

The good news is that momentum is turning in Discovery's favor lately. The stock has moved higher for eight consecutive trading days, including each of last week's five days. The rally began after media mogul and Discovery director John Malone disclosed the purchase of 332,523 shares in the high teens two weeks ago, boosting his stake to 939,432 shares. We also can't dismiss the potential of Discovery as a takeover candidate, even as it angles for the close of its purchase of Scripps. The challenges are real, but Discovery's cost-effective content creation and the benefits of its deal with Scripps are breathing new life into the stock as 2017 comes to a close.