Please ensure Javascript is enabled for purposes of website accessibility
Log In Help Join The Motley Fool
Free Article Join Over 1 Million Premium Members And Get More In-Depth Stock Guidance and Research
By Daniel Miller - Dec 26, 2017 at 6:02AM

A decade ago, Ford and other Detroit automakers paid the price for neglecting passenger cars. Is that happening again?

Since the recession, Detroit automakers Ford Motor Company (F -1.25%) and General Motors (GM -3.40%) have done all they can to reassure investors that they are nothing like the management teams that led their respective companies down the road of poor quality and eroding profits. Alan Mulally was wildly successful in driving Ford's rebound, and Mary Barra has been equally successful recently at General Motors. But is Ford's recent decision to cancel plans to build the next-generation Fusion in Hermosillo, Mexico, a sign it could be repeating its earlier mistake of neglecting passenger cars?

In the years leading up to the most recent recession, Detroit automakers were widely known for two things: massive gas-guzzling, yet profitable, SUVs and low-quality, poorly designed, and rarely profitable passenger cars. In the years following the recession, that narrative quickly flipped, and Detroit became competitive with its passenger cars. But as one key selling point, fuel economy, improved by leaps and bounds, it opened the door for a massive change in portfolio strategy.

"The reasons for the balance in history had more to do with fuel than customer preference," Jim Hackett, CEO of Ford, told Automotive News. "And so, if you can get rid of the difference there because of fuel, you start to relieve the pressure of what kind of portfolio you have to have."

Citing sources familiar with the development, Automotive News reports that Ford has told its suppliers the Fusion won't be made in Mexico anymore, which leaves the car's future after 2020 quite blurry. If Ford doesn't produce the midsize sedan in Mexico, it seems unlikely and difficult to imagine it would import a next-generation Fusion from China to the U.S. or Europe, as the automaker will with the smaller Focus. 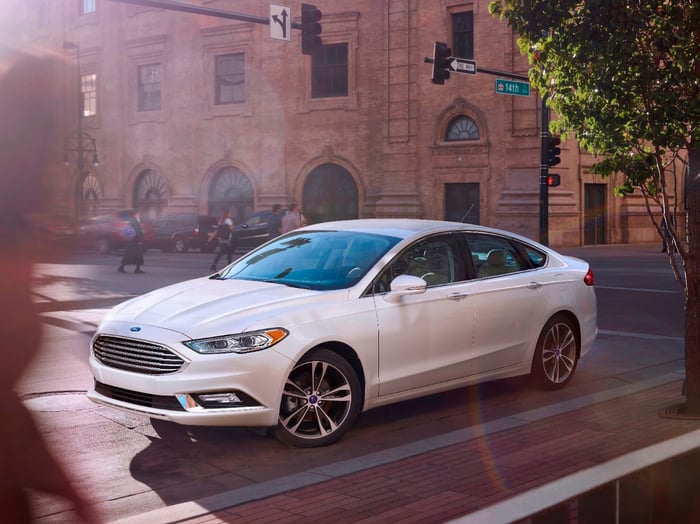 Even as demand shifts back to SUVs, and with executives acknowledging that this may be a permanent switch, potentially axing Ford's best-selling passenger car in the U.S. market seems risky. Risky because in the past when Detroit automakers neglected passenger cars, it eventually came back to haunt them when consumer preference changed in favor of saving money. But there's no question that Ford sees the trend: Ford brand car sales are down 15.8% through November compared to the prior year, and the Fusion is down 22.1%. 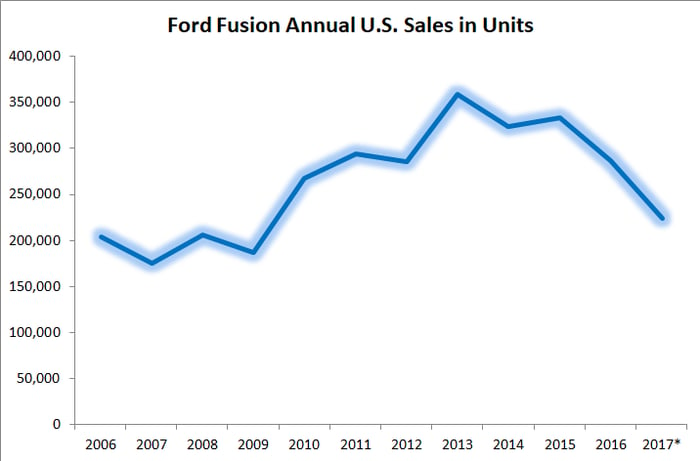 It's fair for investors to question whether axing Fusion production in Mexico, and potentially its offering in the U.S. market, makes sense, since ignoring passenger cars to focus on SUVs has proven a mistake in the past. However, the move would highlight the pressure that management is under to cut costs and focus on higher-margin products at a time when sales of passenger cars are tanking and the U.S. auto market is peaking. We also have to keep in mind that we may not have all the details, and Ford could surprise us and export the Fusion to the U.S. and Europe from India, rather than China or Mexico.

We'll know more about this soon, and as the industry is about to evolve more over the next two decades than it has over the past 10 thanks to driverless vehicles, electrified fleets and emerging markets, get ready for many crazy developments to take place as automakers prepare to adapt quickly, or die.